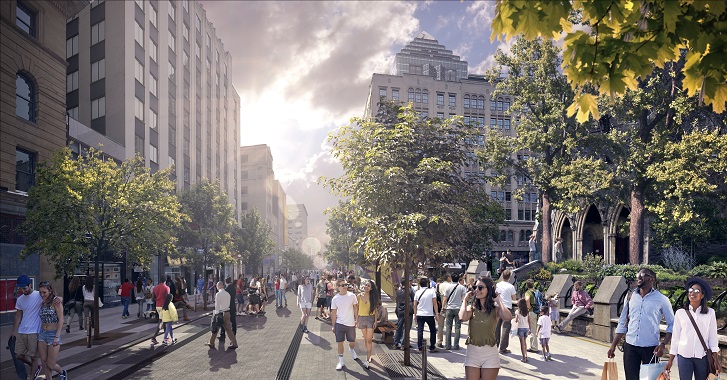 Montreal mayor Valérie Plante has announced a four-year plan to revitalize Ste-Catherine W., featuring the addition of greenery, updated lighting and enough sidewalk space for the entire Murphy family to form an impenetrable, ambling wall of human detritus as they choose between several chain restaurants.

The redesign of Montreal’s iconic thoroughfare will see sidewalk width increased by 60 per cent, driving lanes reduced and parking removed entirely. The plan aims to facilitate more pedestrian traffic, which will come to a complete standstill as Jane and her adult children confidently plant themselves five abreast while Mike uses single-finger typing to Google “what time is movie.”

In addition to taking advantage of free WiFi, pricks like the Murphys can enjoy the beauty of freshly planted trees from one of Ste-Catherine’s new seating areas while hovering in a disorganized clump, fully blocking the only available bench as they struggle to determine the greatest basketball player of all time.

The Murphys aren’t the only assholes who will benefit from the changes. More space will mean Angela can avoid accountability altogether as she parks her double-wide stroller at a crosswalk while Declan has a learning moment with his shoelaces. For Jacques, a wider berth means a bigger, more impressive Moses effect for the alpha male as he strolls down the centre of the sidewalk penis-first.

With an expected increase in tourism, university students will be able to yell-talk words like “dichotomy” into an increased number of faces as they collectively saunter down the sidewalk in a loose horseshoe formation.

While the changes bode well for jerks on foot, piece-of-shit families with cars won’t be experiencing the same benefits. With 144 parking spots being removed from Ste-Catherine, drivers can expect fewer chances to lurk in the middle of the road, blinkers on, waiting for someone to evacuate the spot nearest McDonalds. The city’s promise of a new parking app, however, leaves some room for optimism, providing the opportunity for ill-prepared motorists to stop dead in the middle of traffic as they dick around on their phones.

Although Plante’s vision doesn’t include the heated sidewalks promised by the previous administration, the city plans to draw pedestrians to the area with events such as street fairs, offering a brand new location for meandering, disoriented tourists to shuffle erratically in front of emotionally bankrupt locals.

Plante says the sidewalk expansion has been well received overall, citing the city’s recent consultation with a free-spirited woman eating a whole avocado with a spoon. ■