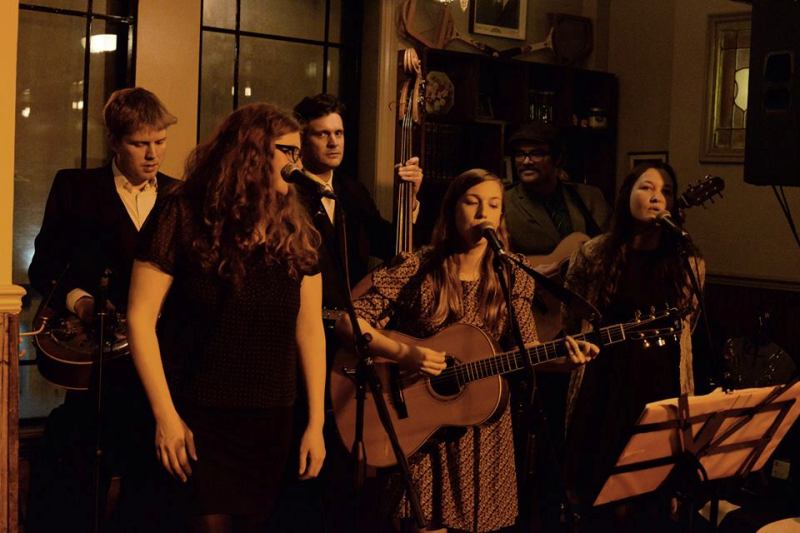 A who’s who of local singers, songwriters and instrumentalists in the folk/country scene have banded together as El Coyote, a supergroup with a sound evoking classic Nashville and the best of contemporary alt-country all at once.

Katie Moore and Angela Desveaux have solo careers and a long list of collaborative credits, while Michelle Tomkins and Mike O’Brien perform together as Sin and Swoon, Andrew Horton leads country cover band the Firemen and plays upright bass with a number of acts (including Katie Moore and the Montreal Symphony Orchestra) and Joe Grass has played guitar with the likes of Patrick Watson, the Barr Brothers and Blue Rodeo while also maintaining a solo project called Klaus.

This week El Coyote is launching their self-titled debut album, so I caught up with Desveaux for the band’s origin story.

Nico Ogilvy: Your bio mentions a kitchen song-swapping session that started this group — who was in that initial session?

Angela Desveaux: Actually, it really did start out with all the members who play on the recordings. Katie Moore, Michelle Tompkins and myself are the main songwriters of the band and we would bring our originals randomly to the table without any expectations or outcomes — “keeping it simple & fun” is what we kept saying ’cause we all had other careers in music and other stuff going on as well. Mike O’Brien plays guitar, Andrew Horton plays stand-up bass, Joe Grass plays dobro or pedal steel guitar and they would all sing along to our songs and sometimes add their own songs, whether it be originals or cover songs.

NO: Did you set any parameters for yourselves in terms of the music styles, song structures, themes or anything else?

AD: We definitely didn’t set any conscious parameters, but after a few musical gatherings it was clear the style that suited us best and we all had a liking for was folk-country. So our writing style always seemed to go in that direction. We liked the songs that could accommodate three-part harmonies, or else there was no point playing it with the band. But even though you could call our style folk-country, folk-rock, Americana or whatever, we each have a very different and unique songwriting style, which I think is why we can to appeal to a wide variety of listeners. So I would say there is no common theme, but a lot of storytelling and visions of the values we hold as people, which I think is common to classic country music.

NO: When did it become clear that an album was taking shape?

AD: When we booked our first session at the Treatment Room Recording studio, which is owned by my partner, Gilles Castilloux. We initially said it would be a short demo “just for fun,” and in fact we had so much fun that we booked another session and decided we would attempt to put the songs out as an album. We just wanted to record the songs as a document of the good times and good music we shared together.

NO: How did the band name come about?

AD: The initial name we went under for our first gigs was Tight Perm. I thought it represented us really well! You know, 80’s-90’s country music. It was a little too silly, but somewhere in the back of my mind, we are still Tight Perm.

El Coyote felt and sounded more mature and didn’t restrict us to a specific image or style. We realized at a certain point that if we were gonna make an album and play shows, we wanted a name that was more serious and didn’t immediately impose an image of skin-tight acid-wash jeans. ■