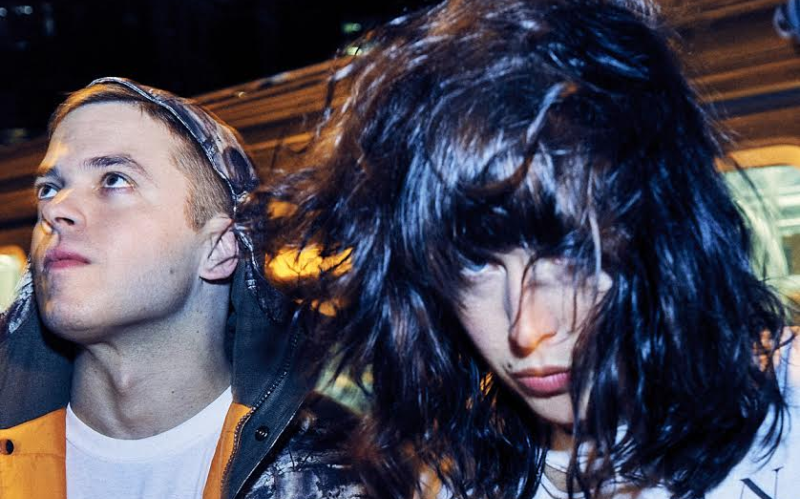 As I clicked play on “And Saints,” the lead single from Sleigh Bells’ new mini album Kid Kruschev, unwavering guitar chords pounded through the speakers with purpose. It didn’t take long for the melodic, crystalline voice of the noise pop duo’s frontwoman Alexis Krauss to lift the hair off my skin as she sang, “I swear I’m the shell of a man/You said, ‘Nah, you’re a hell of a man.’”

Kid Kruschev finds Krauss and Derek Miller diving into a dark world — a poignant choice considering the veil of a political climate that surrounds the United States — laced with surprising vulnerability and grace.

Alexis Krauss: It’s a name that Derek had been toying around with for a long time, and a big part of it was just the way it sounds — something about the alliteration and the almost violent nature of the way that the words come out of your mouth. But then there is also the juxtaposition between children and innocence, with Khrushchev and the history of inhumanity, complexity and corruption. Of course there is some modern, political reference to be made there. It’s not even something we thought about, but after we decided to go with that for the name of the mini album; we were like “Oh yeah!”

MS: Let’s talk death! Was there a different exploration of death on this album vs. Reign of Terror ?

AK: It’s always interesting for me to answer these questions because Derek is the primary lyricist, so a lot of the more personal content of these songs is very much about his own life and his own process. Reign of Terror was written shortly after the death of his father and it was obviously a way for him to come to terms with that loss. I think this record has more to do with feeling overwhelmed by the circumstances that surround us whether it be personal, political or social, and to figure out how to contend with them, and how not to feel hopeless, to overcome them — that’s more I how perceive it. I think this album has an optimism about it.

MS: On social media, you made a call to fans to remain vigilant and woke during the trying American political environment. How did politics influence this album?

AK: Derek and I were both more comfortable going there this time. And by going there, I mean addressing some things that maybe in the past we did not want to address. We did not want the music to be coloured by politics or our own opinions. I don’t know if it’s because we’re more in touch with things and more socially aware. But there’s more crossover happening when we write. We started writing [the album] before Trump’s election, and then we were actively creating it while we were all contending with this very bizarre, traumatizing period in our country. It was very hard not to translate that into the music, into our creative outlet. I personally have gotten more comfortable with the idea of using my voice and platform to be vocal about issues that I care about; being comfortable and angry and wanting to find an outlet for that anger and not turn it inwards.

MS: What was the motivation for the different characters in the “And Saints” music video, particularly the high school grim reaper cheerleaders?

AK: Derek and I couldn’t be more happy with how those images actually came to life. He directed that video with Mimi Cave, who was such a pleasure and rallied such a great team. There are definite references to the Treats album cover — it’s a photo of cheerleaders, actually from Derek’s mom’s high school yearbook, where their faces are warped and distorted. The cheerleaders from the video reference those Treats cheerleaders and their transformation. And my character, she’s sort of this quiet warrior standing out amidst of the chaos of this black metal band that’s trying so desperately to be tough and appear weak in contrast to her quiet power.

Talking about death, there is definitely a standoff at the end and I see it as her stepping towards death and being triumphant and victorious — I don’t see it as her demise. But I think it can be interpreted either way. It feels a lot like us; a lot of confusing, bizarre imagery, but there is actually something to be found there.

MS: Nowadays, some albums have over 15 producers, but on Kid Kruschev it’s just you and Derek. What is your creative process as producers?

AK: We’ve been pretty introverted about creating some of the music and I think it has benefited us in a lot of ways. Some would say we should be more open to collaborations and ideas, and yeah, we’ve worked with people and have had positive experiences. But I don’t want to say we were thinking small with this album.

We finished touring for Jessica Rabbit and we spent a lot of time working on that album, exploring with different producers. Kid Kruschev was a reaction to that — “Let’s just say ‘Fuck it!’” and not worry about timeline and record labels and how many songs or who is going to hear it. It was just recorded either on our bus when we were touring or when we were at my house, just the two of us. We spent a lot of time just thinking about these songs and being as brutal towards them as possible. And when we saw we were finished, we talked about the idea of working with others, but the songs felt complete.

I think some people feel too much pressure to have to work with outside people — I dunno if that pressure is coming from labels or from their own insecurities, but Derek and I really enjoy hashing it out between the two of us.

MS: Have you guys talked about, or have desires, to collaborate with other musicians?

AK: Yeah, definitely! We have a bucket list of people we would love to work with and we are actually doing some collaborations — I don’t want to say who. For Jessica Rabbit , we worked with [Dr. Dre producer] Mike Elizondo and he ended up producing or co-producing three or four tracks on the album, which was one the best creative experiences we’ve ever had. We learned so much from him, so much!

MS: Are there any specific musicians you’re dying to collaborate with?

AK: We believe it would be amazing to do an Andre 3000 collaboration. There have been a couple of moments where we’ve been like, “Man, if Pharrell heard this I think he’d really like it. We should try to work with him.

MS: Who are you listening to at the moment?

AK: Currently, a lot of Roy Orbison, Percy Sledge — he did “When a Man Loves a Woman,” but I recently discovered his song “Out of Left Field,” which I’m obsessed with. I just recently saw Three Billboards Outside Ebbing, Missouri, it’s the new Frances McDormand movie, and on the soundtrack there’s this amazing cover of a Townes Van Zandt song that’s been totally blowing my mind. In general I’d say the whole Carter Burwell soundtrack is really excellent. I’ve been listening to a lot of Loretta Lynn and Patsy Cline. I’ve been revisiting Suburban Lawns, the song is called “Janitors.” But there are a lot of weird tracks like Siouxsie and the Banshees, new wave bands, old Blondie songs — just a real hodge-podge.

MS: Are there future projects you’re working on that you can talk about?

AK: We’re really interested in playing around with the process of releasing music at a regular rate, not necessarily full albums. So we’re putting out what I call the companion album to Kid Kruschev. That’s the goal for now. We still have a lot of ideas! ■