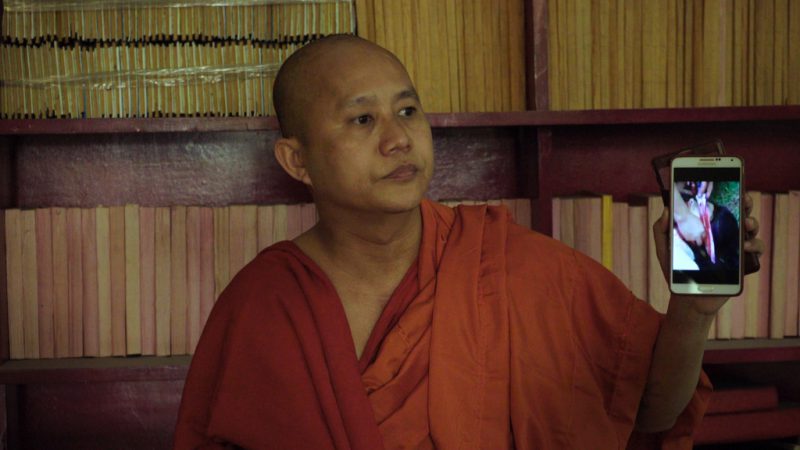 Ashin Wirathu in The Venerable W.

In 1974, Swiss filmmaker Barbet Schroeder (Barfly, Single White Female) made General Idi Amin Dada: A Self-Portrait, a documentary exploring the life and practices of the Ugandan dictator. In 2007, he followed it up with Terror’s Advocate, which used a similar “self-portrait” approach to Jacques Vergès, a French lawyer best known for defending war criminals and other controversial figures like Klaus Barbie, Carlos the Jackal and Khieu Samphan.

Now Schroeder closes out his “Trilogy of Evil” with The Venerable W., a portrait of Burmese Buddhist monk Ashin Wirathu, a populist leader who spews anti-Muslim rhetoric that has led to the ethnic cleansing of the Rohingya people in his native Burma. Schroeder is invisible in his film, letting Wirathu draw his own portrait. Though he claims to be peaceful, Wirathu’s speech constantly returns to depictions of Muslims as rabid dogs and he hardly seems to condemn the violent actions that shake Burma almost daily.

“It was the same approach I had with Amin Dada and Jacques Vergès,” says Schroeder. “I told them it was more or less a movie in which they would draw their own portraits. I told him it was a movie that would be objective in its depiction of him in the sense that I’d let him talk. He asked me why I wanted to make such a movie, and I told him that it was because the French public was interested in hearing what he had to say because his ideas were the same as those of the person who was about to become President of France — at the time, it seemed very probable that Marine le Pen was going to become president. He spoke to the French who were interested in the topic. (laughs)

“Of course it affects me, but my job is to gather the words of someone who’s incriminating themselves,” he continues. “I never intervene when he says anything — I won’t start contradicting him when he starts talking, because that’s what all journalists do. Journalists are always contradicting him, saying, ‘But you’re responsible for a genocide! But you’re doing this and that! Don’t you understand that hate speech turns into hateful behaviour?!’ All I do is say, ‘Keep explaining! Explain some more!’ and that’s how I get closer to the truth.”

The major change between The Venerable W. and Schroeder’s previous films from the trilogy of evil is the access to footage. Because the genocide in Myanmar is a current event, nearly all of it is filmed — by news cameras, sure, but also by hundreds and hundreds of cellphones capturing atrocities at ground level.

“It’s much easier now,” says Schroeder. “We were two to do the research, and we had access to the internet. At the time of the Vergès doc, we were 20! I needed a team of 20 people because the internet was much more limited. I worked completely alone on the Amin Dada film, with the only English-language newspaper in Uganda as my primary source. From the day Amin Dada came to power to the first day of the shoot, I read the newspaper every day. I barely slept and just looked for quotes and articles about Amin Dada. That way I could bring up things he had said in the past in our interviews.”

Schroeder has no nostalgia for the old working methods, however. “It’s a lot more efficient now!” he says. “We can go much deeper — very deep. There are traces of everything that can be found. It doesn’t compare!”

Since the film was picture-locked in January of 2017, the situation in Myanmar has continued to evolve, for the worse. “There are things happening every day,” he says. “There are thousands of Rohingya that are trying to flee to this day. It’s all still happening. The Rohingya people have practically already been ethnically cleansed in the sense that there are one million that have been displaced. In that sense, the ethnic cleansing has more or less worked, and they continue to try. That’s where it’s at now.

“Another thing that happened is that the army’s propaganda, the state’s propaganda, has been so successful that 90 per cent of the population is glad that the Rohingya are gone. It’s to the point now that the head military officer thinks he has a pretty good chance of being elected if he goes up against Aung San Suu Kyi. He has gone way up in the public eye, when in fact people used to despise the military and elected Aung San Suu Kyi in response to that. That’s the result.”

It’s more than a little depressing to watch The Venerable W. and see the outcome of such pronounced anti-Muslim sentiment, one that has gained a foothold in the western world as well. “Well, yes, of course it’s depressing,” says Schroeder. “It’s a movie I’ve made not only for the Burmese but also for the western world and those parts who are faced with the exact situation. I want them to know where racist talk leads to. It doesn’t matter if it’s antisemitism or anti-Muslim sentiment, it remains hate speech taken from books. For antisemitism you have books like The Protocols of the Elders of Zion or Drumont’s La France juive; Wirathu has his own book that shaped his thoughts and speeches. That book — the name of it escapes me now, but it’s in the film — didn’t just inspire Wirathu, it was the basis for all kinds of racist pamphleteering in the past. In all countries there’s a basis of literature — a baseline of anti-whatever literature — and that’s what gets reused and recycled over time. You can tell which things the public reacts to pretty easily, and those are the ones that are recycled time and time again until they start to become more and more important. You can see that danger, and it’s important to know that that danger is there. You have to remain lucid about this.”

Now that the trilogy is complete, I asked Schroeder if he considers his exploration of evil done. “When I made the Amin Dada movie, I wasn’t thinking about it like that at all,” he says. “I had several projects in mind after that one, but now I can’t really see how you can do worse than this one. There’s a real progression between terrorism and genocide, but I can’t see a greater crime than genocide. I don’t know why I would take it down a notch at this point! But you never know. If I do, it will be outside of the trilogy. I’m more of the idea that I’ll make a Trilogy of Good (laughs) — that is, if I find enough good in this world to make a movie about it.” ■

The Venerable W. opens in theatres on Friday, Jan. 26. Watch the trailer here: