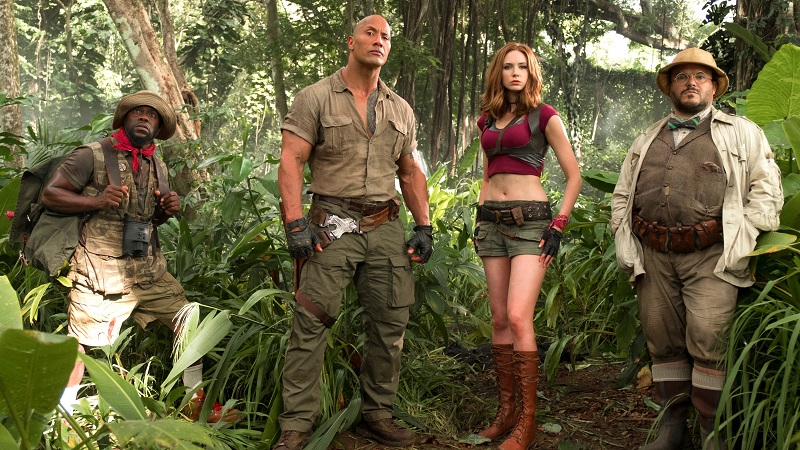 If we’re not careful, ‘90s nostalgia will end up sucking us in and making us prisoners of the not-so-distant past forever, kinda like the board game in Jumanji. We’ll be stuck cleaning up our Tamagotchi’s poop until young millennials free us by taking up the mantle and dutifully reliving their youth in 20 years thanks to unnecessary remakes of whatever’s trending right now (Young Sheldon?).

Until then, follow that throwback beating drum straight into Jumanji: Welcome to the Jungle, the sequel you didn’t ask for, but you might actually end up reluctantly enjoying.

Helmed by Jake Kasdan (Bad Teacher) and written by a quartet including Chris McKenna and Erik Sommers (Spider-Man: Homecoming), the movie clumsily places its pawns in order to stumble into its main plot points as quickly as possible. Just in case you forgot, the 1995 film ended with the magical, safari-inducing board game surfacing on a beach. The much-belated sequel picks up in 1996 with a jogger tripping over the drumming box and bringing it back to his video game-playing teenage son who scoffs at the idea of board games. This seemingly explains why Jumanji magically becomes a video game to support the general concept of the entire movie.

Fast-forward to the present when the movie has to trudge through the intro of four teenage clichés before introducing us to the film’s four stars. Spencer is an awkward nerd, Fridge is an imposing jock, Bethany is a self-obsessed pretty girl and Martha is pretty much a clone of that cereal sandwich-munching outcast from The Breakfast Club. Once whatever-reason leads them to find each other all in detention, they find the game and plug in, each choosing an avatar.

Minutes later, they’re plummeting from the sky into the world of Jumanji, trapped in bodies that aren’t their own. The shy nerd gets to be the muscled and bald Dwayne “The Rock” Johnson, eyebrow arching at any occasion, Fridge gets reduced to a tiny, backpack-sporting Kevin Hart, Martha becomes a babely, Tomb Raider-esque Karen Gillan and Bethany now has Jack Black’s gut and dick. This generates all ensuing silly situations and one-liners thrown into a mix of hungry hippos, stampeding rhinos and a villainous, animal-controlling bad guy (Bobby Cannavale) who tries to derail their quest to get outta there.

Before you get your ‘90s kid’s knickers in a twist, best remember that the original Jumanji might hold a special, Robin Williams-shaped place in your heart, next to Babe and Space Jam, but for the most part, it was critically panned upon release. If the original relied on special effects, Williams’ brand of goofy comedy and a touch of sentimentality to deliver some family-friendly fun, the re-boot/sequel does a lot of the same. Its jungle-set adventure plot doesn’t make much sense, but moves along at a playful trot to keep you entertained throughout. Hart and Black pep it up with some low-level guffaws, if you accept that the level is Black speaking with a teen-girl twang and discovering his/her new appendage and Hart is, well, so damn small! Johnson hardly veers from doing his usual best of flexing and smiling, but would you want him doing anything else, really?

In short, Jumanji: Welcome to the Jungle is a bit of light-hearted fun that’s probably not for nostalgic adults prattling on about VHS and how great films with talking animals were. It’s for a new generation of kids and teens to enjoy and laugh at, so they can eventually complain about the possible follow-up in a couple of decades, starring people who aren’t even born yet. Namasté. ■

Jumanji: Welcome to the Jungle opens in theatres on Wednesday, Dec 20. Watch the trailer here: