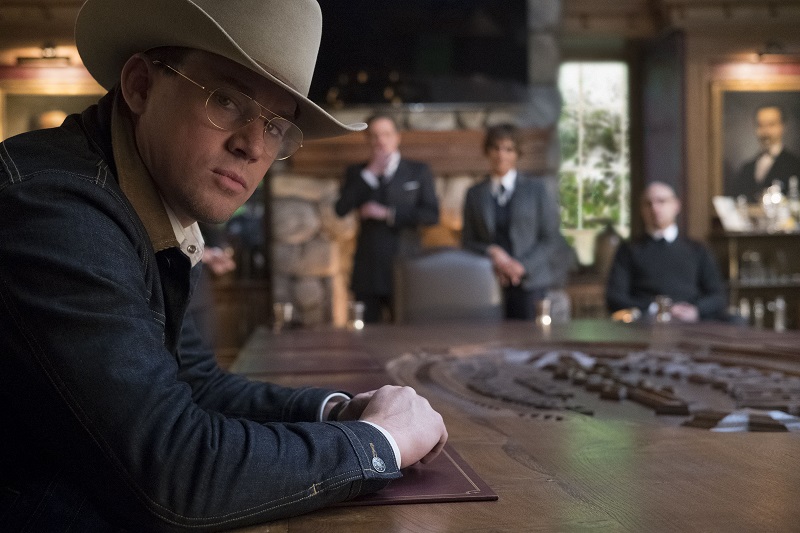 Channing Tatum and the out-of-focus actual stars of Kingsman 2: The Golden Circle.

In his sequel Kingsman: The Golden Circle, director Matthew Vaughn cranks up the silly spy-scapades to whole new ridiculous levels. Our very own James Bond from a council flat, Eggsy (Taron Egerton), is now happily settled as a ruffian turned gentleman spy, living with the beautiful Swedish princess rescued in the first film. A scene involving a gigantic bag of weed as a centrepiece indicates that he’s still totally, occasionally “fam, bruv.”

All seems fine and dandy (because we’re in England) until a violent encounter with an old rival leaves poor ol’ Eggsy as the only surviving Kingsman, along with tech guy Merlin (Mark Strong, speaking in a very poor Scottish accent). They set out to Kentucky to get help from their American brethren, a private intelligence agency called Statesman, hidden within a bourbon distillery.

Cue American bravado and clichés in the form of gun-slingin’, tough-talkin’, chain-smokin’ agents Tequila (Tatum) and Whiskey (Game of Thrones and Narcos stud Pedro Pascal), led by none other than Champagne (Jeff Bridges). Add to this the film’s villain, a peppy drug baroness named Poppy (Julianne Moore), living in a twisted version of small-town 1950s America, albeit built in the middle of a jungle, and I’ve got a sneaking suspicion that our man Vaughn here is a true believer in the old adage “go big or go home,” and also, “be really fucking obvious.”

Needless to say, it’s all over the place when it comes to plot, tone and general goofiness. While a fun mess for the most part, it does wear thin after two hours of zany spy gags, including one that severely tested my patience. I mean, I don’t want to straight-out spoil it, but divulging that Vaughn pretty much performs a cervical exam with his camera on Poppy Delevingne should sum it up quite nicely. Delving into cartoon-like depths of excess and base humour makes the whole thing a tad more reminiscent of the Austin Powers franchise than the Bond one.

Tatum is cruelly discarded way too early on; Elton John literally gets more screen time than him. That being said, the campy singer is surprisingly the funniest part of this film, so, that gives you an idea of the state of things. Everyone’s mum will also rejoice at the return of Colin Firth. Unfortunately for mustachioed man-babe Pascal, the movie needed a bigger and brasher American counterpart to Egerton’s Eggsy than Whiskey, a forgettable, lasso-wielding character. Same goes for Halle Berry, who spends most of the film looking up at a giant screen, wondering what the hell’s happening. Halle Berry is all of us.

While the film incessantly jumbles you around to keep you entertained, it feels like more of a grandiose set-up for what’s to come, which might just be Tatum in a Kingsman bowler hat. If that’s the case, I shall return, but I’ll be hoping for a storyline involving Tatum’s old dancer buddies shaking up jolly-old England with their booties (Magic…Mate?). Don’t act like you’re too good for that, Vaughn. ■

Kingsman 2: The Golden Circle is in theatres now. Watch the trailer here: