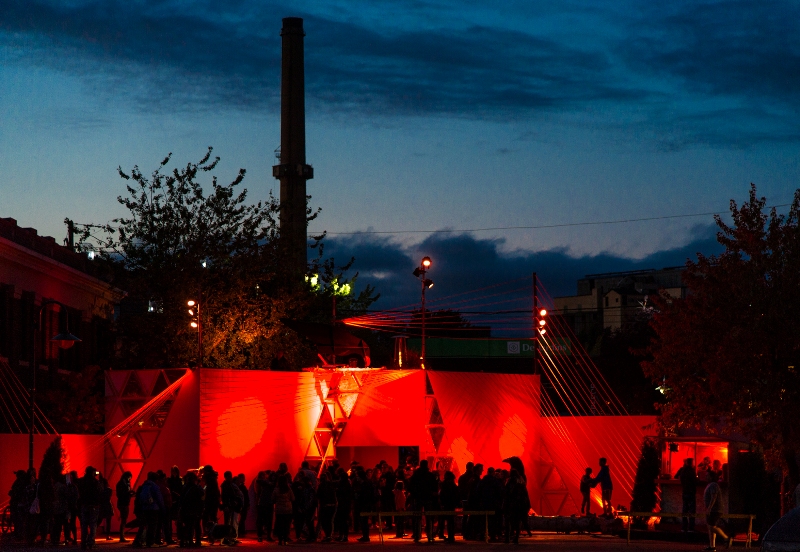 As Mile End received a new, corporate-backed festival this weekend, I was lucky to venture out to northwest Quebec to experience a business endeavour that seems to have shown an ounce or two of passion for its home over the course of its 15-year existence. Sure, a giant Sirius-XM banner strewn across a pop-up stage on main street doesn’t exactly read as underground, but FME is a part of Rouyn-Noranda and its presence is welcomed with an electric warmth from seemingly every resident of the small mining town year to year.

Rouyn is a bit of an odd place, the eight-hour ride overfeatured rolling hills and sprawling lakes and ponds, but mostly a whole lot of bumpy roads through nothingness. Industrial machinery eventually pops up surrounded by some nice-looking lake houses and a downtown area with a few restos and oddball cafés.  Somehow, the people of this displaced prairie town have a record store where the Avalanches’ comeback album is on their top sellers list and a handful of music venues that see action throughout the year. During FME, they’ll party until 5 a.m. with some hot DJs and immerse themselves in surprise shows on practically every street corner.

I’m not going to chalk up the receptive musical ears of the people of Rouyn entirely to FME.  However, it certainly seems like the festival’s genuine love for these people, combined with its way of saying “I dare you” with noise bands at 1 a.m., has worked its way into their lives and helped them build up their art spaces and tastebuds in a community-first manner — maybe Mile Ex End should’ve been taking notes.

FME was a jam-packed four days, but here’s my account of the most unforgettable moments: 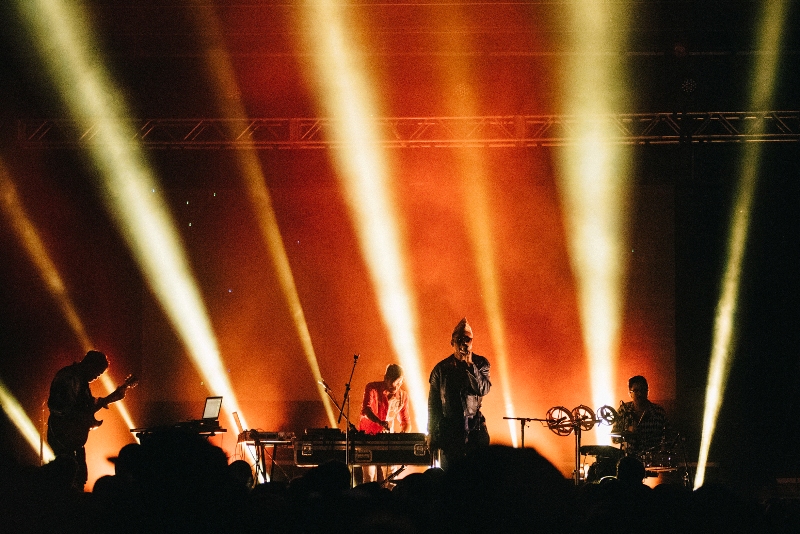 Thursday immediately shifted into gear with programming until 3 a.m.  The outdoor stage was a full-on rager with A Tribe Called Red headlining after a string of dance-friendly openers.  Having seen them in May, I was drawn elsewhere, but I couldn’t resist Montreal hero Pierre Kwenders’ opening set.

The maestro of groove strolled out in brooding darkness like he owned the place and after about a song and a half, he did. Kwenders pulls from a ridiculous number of influences.  Funk and Afrobeat are foundational, but throw in the psychedelic whirlwind of his duelling guitars and constant stream of uniquely catchy hooks and you’ve got an invigorating and eclectic mix of sound that only Kwenders could pull off.

His latest single “Sexus Plexus Nexus” operated as a centerpiece, distilling the atmosphere into a punching, slick sheen before more howling masses of noise came back for the raucous finale.  Dance moves and all, Kwenders never fails to drum up excitement and the crowd was dancing and singing their hearts out the whole time.

The transition from Kwenders to Shauf was about as stark as it gets and I don’t think too many locals did the same —without a media pass, it does seem a bit more difficult to constantly bounce from venue to venue.

Shauf’s music finds warmth in its quirky, gray drear as prodding guitar melodies and sluggish tempos underpin detailed accounts of social anxiety, loneliness and despair.  His band didn’t make any decisions too jarring, but drummer Olivier Fairfield’s ear for tasteful, delicate fills and the sensible use of clarinet duets combined with Shauf’s songwriting mastery for an infatuating, emotional experience.

Sometimes you’ve got to listen to the kids.  Like last year’s outing with Dead Obies, le Paramount’s Friday-night hip hop showcase was one of young adults and teens yelling the lyrics of every song back at the man on stage.  For over three hours, the energy never let up as local Mathew James got his big shot before Lary Kidd went absolutely crazy.  Alaclair Ensemble members Eman and Vlooper showcased the most promising set for studio use with sharp, mature flow and biting production before the whole gang showed up to rile them all up once more.  The young crowd has grown up in a world where this event is the place to be on Labour Day weekend and it was clear that they wanted to eat up every moment.

Perhaps it’s the scraggly hair or the slender, shirtless body that seems to have a fair share of wear and tear, but Paul Jacobs comes across as a kindred spirit of Iggy Pop. Positioning himself at the front of the crowd, Jacobs went to war with his seven-piece band through a series of psych pop songs played with a raw punk energy.  The keyboardist’s use of maraca and tom drum and Jacobs’ handclap wielding sample pad added the perfect dose of primal percussion as their kaleidoscopic dream-world went up in flames with each passing tune.

Each year, Saturday sees free daytime activity geared towards families with younger children. For the most part, the festival emphasizes nightlife with the newest bands hitting the bars around 5 p.m., a break for dinner, and the main attractions kick-starting around 8 p.m. So it’s nice to see a slight change in crowd on Saturday afternoon and it would be nice to see an expansion of their afternoon programming in the coming years.

This year’s choice came across almost like an Afrobeat oriented version of LCD Soundsystem. On the right side of stage stood the bass wielding Jean-Francois Lemieux in front of a DJ set-up, supplying synthesizer programming as well as some sick slap-bass lines.  Opposite him were a pair of rowdy hand percussionists and middle was vocalist Djely Tapa who led the charge with inspiring energy and passion. If a bunch of wild DJs come out of Rouyn-Noranda in 10 years, we’ll know where they got all their ideas from.

I Shot SAMO are fun as hell and pack a lot of potential. The “Psycho Killer” cover was logical considering their ’80s bubblegum pack of influences — I was hearing some Missing Persons and Billy Idol in there, too. They do seem to have some kinks to work out — some riffs sounded out of place, leaning more towards blues rock, and I found that the vocals occasionally rode a bit too close to yelling for the dance-rock format — but I do see them finding their sound and maturing in the near-future.

Not completely enthused by the Saturday night headliners, I decided to give the church venue a shot — perhaps for the sake of conserving my energy in what was sure to be a night ending no earlier than 4:30 am.  Luckily, openers le Bleu turned out to be the most surprising set of the whole festival.

The duo finds a sharp mix of gloomy, gothic influences ranging from post-rock to shoegaze and even a bit of trip-hop.  Their set was a theatrical experience with old televisions scattered about the stage and samples yielding dramatic transitions between songs.

What seemed to make it all tick was the expert use of dynamics. Lead singer Adèle Trottier-Rivard’s smoldering voice could inject the sparse sonic world with a piercing energy, but then a jarring guitar line from Nicolas Basque would herald in a massive wall of pulsing sound.  According to FME’s app, they don’t have any music up online yet, but they’re certainly a group to catch live if you get the chance.

The late-night collection of electronic DJs is another yearly occurrence at the festival and it still baffles me that it’s so successful. Beginning at 2 a.m., the trio of DJs was poised to go all night and still the venue was packed with folks of all ages. Tossing in some Frank Ocean and Cardi B over bright, colorful beats, Thomas White wore his millennial heart on his sleeve.  France’s la Mverte swapped out the EDM beat drops for a more trance-like European techno experience before WYLN closed things off with his hyperactive chipmunk soul. 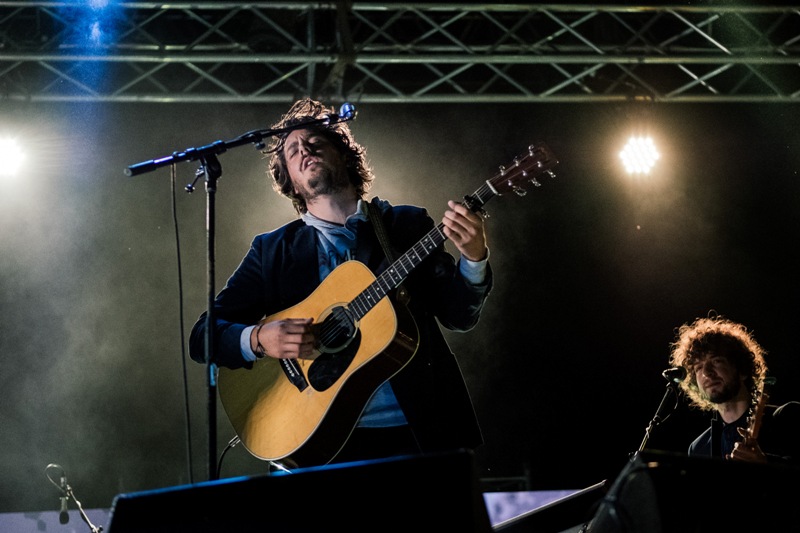 Contemporary classical pianist Jean-Michel Blais pulls together a great bag of 20th century piano influences. There’s the immersive rhythmic texture of Philip Glass and Steve Reich, the sound painting of Debussy and the extended techniques of Cage, all placed through an accessible, melodic lens. His set was superbly well planned, equal parts intensity and delicacy with melodic cells repeating and evolving for huge swaths of time and landscapes of minimalism crafting relentlessly gentle melodies. Relevancy is a hard thing to define with classical composers, but Blais’s ability to please both the masses and the academics was on full display.

Closing out the festival was a handful of folk performances on the beautiful lakeside stage. Between arriving late from an interview and leaving early to get some well-needed sleep, I didn’t catch a whole set, but Matt Holubowski was a great talent to end my FME.  Similarly to le Bleu, his success was found in his smart sonic decisions and dynamics.

Constantly evoking an atmospheric sound, Holubowski would move from minimal terrains with soft-spoken lyrics to huge electro-acoustic textures to underpin emboldened high notes. The intimacy of folk music doesn’t always do so well on such a stage, but Holubowski captured intimacy and managed to make a spectacle at the same time. ■