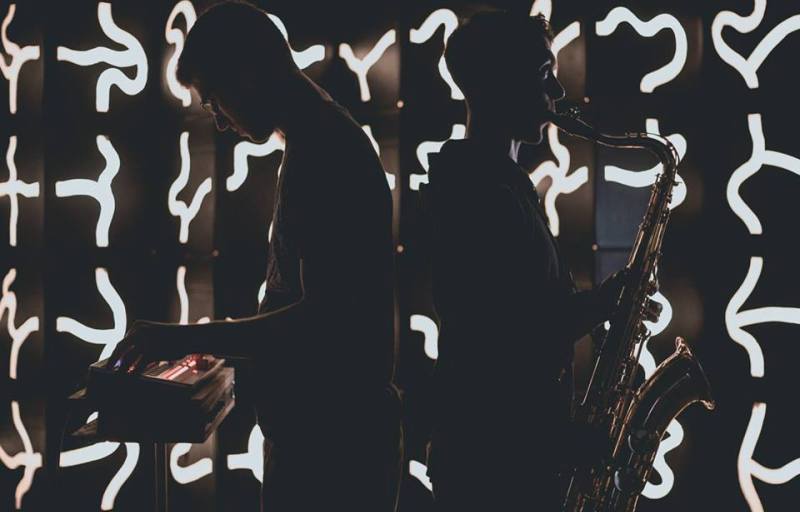 DF is a duo where worlds collide.  One part studio art background, and another music conservatory, the two have found inspiration in do it yourselfers and academics alike and look to inspire folks of all creeds with their new audiovisual EP.  Dustin Finer’s saxophone loops are sharp, melodic and uniquely textured, blissful understatement to leave room for pondering of Dan Freder’s washes of light and imagery. The duo has been working at this for three years and their relationship is a unique fusion poised to take advantage of every facet of the current technological moment.

Here’s the story behind the sensory overload:

Donovan Burtan: Audiovisual EP is a bit of a straightforward term, but what were the ideas behind the marriage of these media?

Dan Freder: Our project has always been an audiovisual one. When we met, Dustin was completing a classical saxophone performance degree at McGill and I was a studio artist in the fine arts program at Concordia and we had a desire to do something performative together outside of the academic contexts we were used to working in. So we were attending a lot of concerts together and we kind of just dove headfirst into performing together.

Our first gig was three years ago for Art Matters, which is Concordia’s undergraduate arts festival, and it was an awesome learning experience — a lot of things went wrong. We’ve used that as a jumping off point to push the project further.

On stage, what we look like is we have a wall of homemade box lights and we use a digital projector. We work together to create works with a one-to-one relationship between sound and what people see on stage.

DB: I get the sense that you’re both trying not to distract from the other thing going on.

Dustin Finer: They’re really meant to be of equal weight or importance for the live performance experience. With the EP we wanted to transfer the fact that we were audiovisual to a recorded format, taking that audiovisual performance practice and finding a way to package that up. We’ve made a series of five music videos, one for each of the tunes, and one of the videos is interactive.

Dan: Laser-disk was not really an option for us so the final physical format of this is a USB key and we’ve made some cases out of recycled plywood that we milled, to kind of press-fit the keys into. You get all of the videos, some remixes our friends have done of the songs, the songs themselves and some secret Easter eggs that are only on the physical copies.

DB: Dustin, were you doing looped saxophone before this duo?

Dustin: No, it really started simultaneously through seeing performers like Colin Stetson, wanting this ability to perform solo, knowing people who were experimenting with loopers. I kind of had this interest and that coincided with Dan and I wanting to develop something audiovisual. It hit at the same time.

DB: Is there sort of a limitation with the looping? There’s definitely a sense of similar sounds going on throughout with all the saxophone stuff, but how do you make it interesting?

Dustin: It’s definitely a major restriction compositionally so I try and use that to inspire creativity.  I consider that these sounds will be looped, it will have some aspect of minimalism through repetition, but what are different ways I could layer or recombine or structure songs so that there’s a different feel to each piece?  I can also use some of the effects that are built in the looper to kind of manipulate the timbres, sounds, try and take it somewhere a little bit beyond the natural sound of the horn.

DB: Dan just mentioned your classical background — what other genres and mediums contribute to the way you approach the sax in this group?

Dustin: Dan and I both have pretty wide ranges of music we listen to that seep into what we’re doing.  Minimalist composers like Steve Reich and Philip Glass, they definitely play a role.

Dan: Another big one early on, as far as making loops interesting, was William Basinski — all that tape delay stuff.

Dustin: Or that piece we just listened to was actually inspired by an Aphex Twin tune, which listeners might not know.  As well as a lot of instrumentalists we have in the city who come from classical or jazz backgrounds and are using that in a more experimental, pop or indie context.  Like Sarah Pagé or Justin Wright.  They have a similar background to me, classical training, but are finding new ways to communicate that on their instrument.  That really inspires me a lot.

DB: We were speaking about the limits of saxophone, but Dan I did notice that the first video is mostly shapes and then there’s some that are hardened music videos. Is that a way that you guys tried to make contrast in the piece?

Dan: Prior to making these five videos for the EP, all of our videos that we had for the project were a documentation of what we do live. So, our approach from the very beginning of this EP was we want to make videos that don’t really have us in them — let’s use this medium as an opportunity to go somewhere else.

The original idea was to work with a different director for each video and maybe I would tackle one.  In the end, we made four of the videos ourselves and we were lucky to have another director help out on the video “She’s Great and All.”  The video with the shapes is quite minimalist and those shapes are part of our physical, live installation.

DB: I understand that Dustin did the storyboarding for one of these videos. Do you find that the two of you are seeping into each other’s mediums?

Dan: A little bit. I think in the last year Dustin has gained a lot of video skills, I have a video production background, but most of that has been on experimental film stuff — it’s very rare that I do a video project that’s narrative. Dustin is a veracious reader and a very experienced storyteller so I think his skills were able to complement mine in a really positive way for a lot of this project.

Dustin: Another element of things seeping back and forth is Dan has a background as a drummer and I don’t think we’d be able to communicate a lot of the ideas we develop if he hadn’t performed music for a big part of his life.  It helps us speak about the lights in a musical way and have that dialogue.

DB: Is that the data you pull from the sax looping, a rhythmic pulse then implement that with the lighting?

Dan: The two things I look at in my software — I use MaxMSP for anyone who’s curious — but the things I look at to drive the visuals are amplitude and pitch. It’s pretty amazing even what one of them on its own can give me in terms of a range of data to work with. Sometimes less is more. ■