When I wrote this a few years ago as part of my bio-blurb on Twitter, I didn’t realize I had summarized a concept that can trace its roots to Plato.

“The so-called paradox of freedom is the argument that freedom in the sense of absence of any constraining control must lead to very great restraint, since it makes the bully free to enslave the meek. The idea is, in a slightly different form, and with very different tendency, clearly expressed in Plato,” wrote Karl Popper in The Open Society and Its Enemies (1945).

In other words, without restrictions on freedom for some, there will be no freedom for all.

“In this formulation, I do not imply, for instance, that we should always suppress the utterance of intolerant philosophies; as long as we can counter them by rational argument and keep them in check by public opinion [my emphasis], suppression would certainly be unwise. But we should claim the right to suppress them if necessary even by force; for it may easily turn out that they are not prepared to meet us on the level of rational argument, but begin by denouncing all argument; they may forbid their followers to listen to rational argument, because it is deceptive [fake media?], and teach them to answer arguments by the use of their fists or pistols.

“We should therefore claim, in the name of tolerance, the right not to tolerate the intolerant. We should claim that any movement preaching intolerance places itself outside the law, and we should consider incitement to intolerance and persecution as criminal, in the same way as we should consider incitement to murder, or to kidnapping, or to the revival of the slave trade, as criminal.” 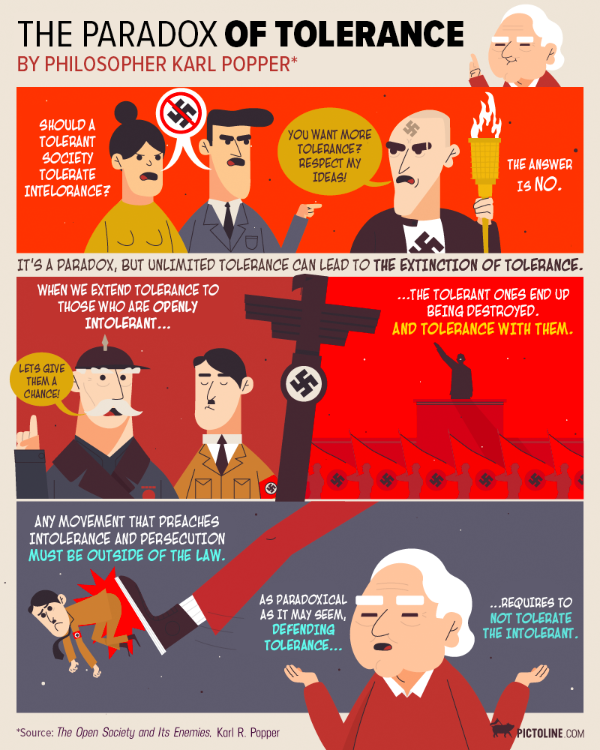 Popper’s paradox of tolerance is especially enlightening in the wake of the anti-fascist protests in Charlottesville last weekend and U.S. President Donald Trump’s attempts to equate the actions of white supremacists with those of anti-fascist protesters. Never mind that one group came armed with banners and megaphones while the other wielded batons, torches and shields while attempting to provoke with racist slogans, including “One people, one nation, end immigration,” “Jews will not replace us,” and that good old Nazi favourite: “Blood and soil.”

Trump’s attempts to create a moral equivalency between neo-Nazis and anti-fascists fails so miserably because the former are the very definition of amoral.

No one could possibly deny that the tighty-whitey-righty agenda that weekend was not merely to defend a monument to slavery but to preach intolerance to an entire country, if not the world. But have we reached a point where we need new laws to punish those who push an agenda of hate?

I don’t think we’re there yet. But we have certainly reached a stage where the proliferation of hate and ignorance on social media requires a much more robust response. We forget too often that we, too, are entitled to freedom of speech, and that includes the freedom to denounce views that offend us and that diminish the humanity of those with whom we share the planet.

We need to stop ignoring it when friends or neighbours tell us “I’m not racist, but …” We need to challenge the intolerant tropes our friends post on Facebook or Instagram. We need to stop settling for being “not a racist” or “not a sexist” and turn ourselves into anti-racists and anti-sexists.

On a larger scale, we should applaud and assist efforts to publicize and castigate the leaders and followers of fascist, racist, misogynistic, anti-Semitic, islamophobic and other hate-based groups, such as what happened in the wake of Charlottesville, where photos of individual “Unite the Right” marchers were highlighted and widely circulated, costing several participants their jobs.

We have to free ourselves from the notion that these tactics are unfair: they are nothing compared to the injustice these people want to impose on their fellow citizens for having the wrong religion or skin colour. These people often live in a bubble where their hatred costs them nothing. It’s time we take away that free pass and expose their prejudices to their colleagues, bosses, neighbours and friends.

People like Trump confuse these types of actions with attacks on freedom of speech, but they are in fact the embodiment of free speech. While conservatives don’t hesitate for a second to threaten advertisers with boycotts in order to punish media for articles or opinions that upset them, they condemn actions like the BDS (boycott, divestment, sanctions) movement against Israel and even try to render them illegal. The only free speech they defend is their own.

The rise of Trump may make it feel like we have reached Popper’s red line, where the advocates and supporters of intolerance are immune to rational argument or persuasion. It’s important to keep in mind, however, that many of them are also primarily motivated by fear. Fear of the Other, fear of the unknown.