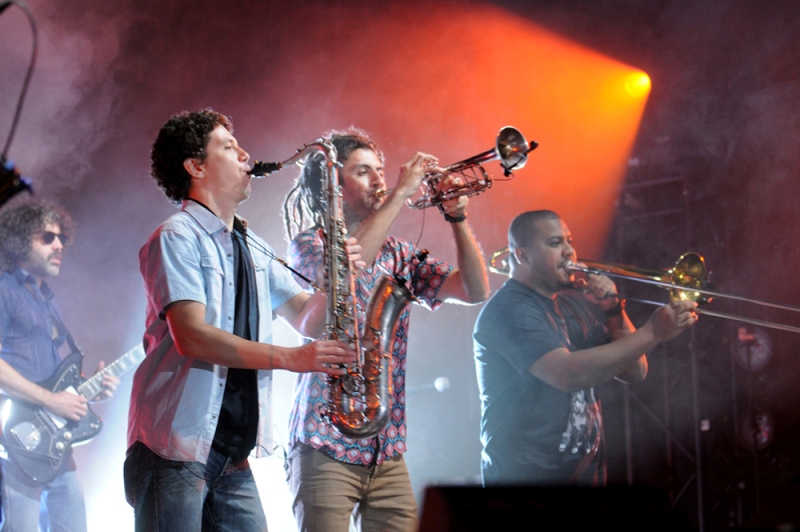 “Jazz is a Four-Letter Word.”

That’s what New Orleans trumpeter, keyboardist, composer and band-leader Nicholas Payton sang on July 4 to a surprisingly small audience at the Monument National. It was the main lyric to a piece that included a looped sample of legendary bebop drummer Max Roach saying “Jazz doesn’t exist.”

If Payton, who began his career as a promising mainstream jazz trumpeter comments on the genre in this way, then what are the rest of us to think? Maybe he’s right. The implication is that Jazz is a limiting label, and what Payton and his band laid down that night during the seventh day of the 10-day festival was clearly not what we usually understand as jazz. It was funky, gritty, dreamy urban music with infectious beats and some virtuosic playing, especially from Payton — on trumpet and keys simultaneously!

It is likely that many of the shows during this 38th edition of the Montreal International Jazz Festival raised the same questions about jazz. Guitarist Bill Frisell’s duo set with bassist Thomas Morgan at the Gésu on July 2 certainly did. It was a mesmerizing nearly two-hour set (with the encore) that contained only one true jazz standard (Billy Strayhorn’s “Lush Life,” beautifully rendered). Mostly it consisted of tunes by Frisell and arrangements of Americana melodies, as well as the theme to the 007 film Goldfinger. The encore featured “Moon River,” but given the typical airy and twangy Frisell treatment. The set contained lots of improvisation, however, and that is at least one essential element we expect from “jazz” artists.

The contrast provided by the pairing on the same stage on the same night (at the Maison Symphonique on July 30) of Charles Lloyd’s quartet followed by “Hudson,” a band made up of fusion shredder John Scofield, drummer Jack DeJohnette, Larry Grenadier on bass and John Medeski on keys, also provided some food for thought.  Lloyd’s group laid down a deep soulful mood right off the top, dedicating the set to pianist Geri Allen, who had just passed away. The interchanges over a very supple time feel, sensitively interpreted by drummer Harland, bassist Reuben Rogers and pianist Gerald Clayton contributed to the depth. The pulse just flowed, almost of its own accord. The music seemed effortless and took us places that were good to go.

In contrast, the more hard-edged Hudson quartet, delivering tunes by Jimi Hendrix and some penned by the members of the group, seemed forced, jagged and leaden. Despite the obvious skill of everyone involved and some fine solos, the music had a hard time soaring. The rock-feel of most of the tunes felt hollow after the transcendent experience of Lloyd’s set, which delivered what we expect from the finest music. Possibly this was one of the reasons lots of people poured out of the hall before the end of the show.

Other memorable shows from my end were not in the concert halls, and not even jazz. These included Selwyn Birchwood on the blues stage on July 1, and Pokey LaFarge’s well-oiled rockabilly swing on the main Place des Festivals stage on July 5.

Jazz may be a four-letter word, but that doesn’t stop meaningful and fun music from happening. ■

See our photo gallery of the second half of the Jazz Fest below. See the first half here.