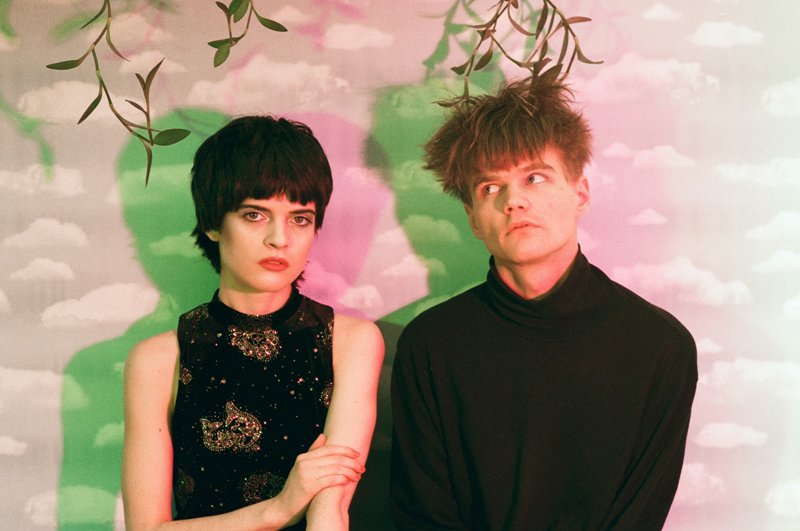 Local art-pop duo She-Devils cut a distinctive figure in the indie world. Spinning soul, surf, French pop of the ’60s and ’70s and other eclectic sounds into their palette of samples, they’ve crafted stunning songs that many would be hard-pressed to recognize as a patchwork.

With the growing presence of Audrey Ann Boucher’s vocals, they’ve continued to drive their sound forward, and their new album is their biggest leap yet. Given that the self-titled LP is also their label debut (on Secretly Canadian), the duo’s other half — producer Kyle Jukka — has had to craft their instrumentals from scratch, but managed to do so while retaining their sonic essence.

Owen Maxwell: How has the switch to loops been for you since you’ve had to move away from samples? Is it hard to find the right sound?

Kyle Jukka: Once we started recording, it just made a lot of sense and it worked for us. We can get more and more precise as we do it. For our first record, we can try and edit as we wind down.

Audrey Ann Boucher: It was definitely a challenge and we really had to adapt. There’s something that felt a little off but we’re getting back on track.

OM: How have you gone about making these new loops?

KJ: When we were assembling our songs, they had a fairly typical instrumentation on them anyways so it was more just an attempt to replace that.

OM: Were you making instrumental adaptations of samples you liked or developing them from scratch?

KJ: It’s a bit of both. Sometimes an idea comes out of playing or I’ll be listening to an old song and think something in the rhythm sounds really cool and go from there. Ideas at their most basic beginning stages come from anywhere but there’s still a lot of inspiration coming from the older eras we sampled before.

OM: Do you plan to play live any differently or will that stay the same?

KJ: I’m still just using my samplers. The guitar is really more of a prop but it would be nice one day to play it. I think we’re getting more on point with the style, and involving ourselves more. We’re not going to get an orchestra or something. If anything we’re getting more formidable.

OM: Was there anyone else that helped this album come to shape?

KJ: Jorge Elbrecht we got in touch with when we wanted to mix the album. We never worked on it in the same studio but we sent all the mixes to him and he spent a while to mix down, but he really improved the sound of the album a lot.

AAB: Peter Woodford, who we recorded the album with, helped guide the process really well as an engineer. He knows all his instruments and sounds so well. He suggests these things to you like an organ or a drum kit for certain sounds so he really helped the instrumentals.

OM: Was it daunting to write an album so focused on love or was it more just a challenge to make sure it was as far reaching as possible?

AAB: I feel like when I was writing the songs, there was never a feeling of repeating myself. I only even realized a connection when I looked at it as a whole body of work. It was a way for me to deal with all the emotions I was going through — it was kind of cathartic. I don’t know what I would’ve done if I hadn’t written these songs at the time. I feel like my emotions can be all consuming and it’s nice to channel that into something constructive.

OM: Do you feel like that catharsis is part of the reason the album felt more upbeat?

AAB: I feel like a lot of it had to do with my own retaliation. We were doing music for a long time without anyone else’s input since we’d just play a live shows, there was never a blog or people writing about it. But when we started putting out videos and released the EP, people said it was dark and moody, it’s like David Lynch etc. I don’t want to be boxed into anything so I tried to do something different from that, which isn’t necessarily the best way to go about making art. I’m so new to it all and needed to adjust to taking things more lightheartedly. That lighter sound was to say that we’re not just this Lynchian band, we have a mind of our own.

OM: Your vocals are so noticeably fuller on this record.

AAB: I think singing more has helped. It’s just a muscle, it becomes stronger the more you use it. My relationship to singing has become more refined because of doing it more and even now compared to recording songs a year ago has kept expanding and I’m learning new things. I try to have more control over it rather than letting it all out whenever.

OM: Did visuals like the one in the “Hey Boy” video inspire any of the music on the record?

KJ: I don’t know if it’s that specifically but when I’m working there’s always an image in my head of the character and it manifests in the way that an instrument is being played, even more so with a voice. I’m not sure if the video is precisely a representation of what I saw or what inspired us, but it’s related.

AAB: It’s primitive and reminiscent of the Flintstones. It’s not the whole but it reflects the heart of an aspect of our aesthetic.

OM: What’s in the cards for the next few months?

AAB: The show in Montreal is going to kick-start our North American tour, then we’re doing a West Coast tour with Beach Fossils in July. We’re also hoping to shoot another video for “Make You Pay,” and hopefully record some new music soon, too. ■