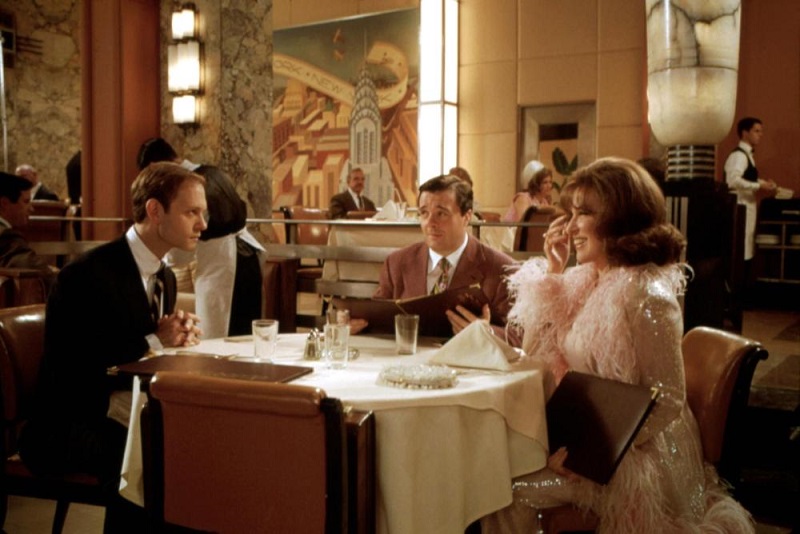 Does Montreal play itself? No. Once again it stands in for New York, while the suburbs stand in for Connecticut.

Most egregious local landmarks: There really isn’t much to note here. Isn’t She Great is a movie about indoor people doing indoor things, and the few outdoors sequences were actually shot outside of Montreal, in places like Terrebonne, Hudson and Trois-Rivières. There’s, of course, a scene using the old bank building now known as the Théâtre St-James as a backdrop, and another scene inside of Birks, but Montreal is extremely inconspicuous in this film.

Notable local talent: Former MusiquePlus VJ/TV personality Sonia Benezra has an almost wordless cameo as a manicurist caught in the whirlwind of one of the film’s least successful comic set-pieces. (It’s doubly strange that Benezra appears here since the other bit players in the scene are not local actors, suggesting that she was either flown out for a bit role or that various bit players were flown in.) Another seriously bizarre cameo comes in the form of lawyer, politician and language activist Peter Blaikie, who plays a talk-show host interviewing Truman Capote (played by the unGooglable Sam Street) in a short sequence. Ricky Mabe shows up briefly as Jacqueline Susann’s son in the last act of the film, and Pauline Little plays a contestant on a gameshow that Susann is a panelist on.

There are generally two reasons why someone’s life gets adapted into a biopic. The first is if that person was so cool/famous/interesting/fucked-up/pathetic that their life holds an inherent power over the viewer before the movie was even conceived — this results in biopics like Walk the Line or Gandhi or even something as trashy as Wired or Star 80. These types of biopics are the ones that are most likely to suck, often because they simply go through a laundry list of the best known things about a person and dramatize them. The second type of biopic happens when the individual’s life is severely overshadowed by something they did, to the point where they might otherwise disappear behind that achievement — that’s the type of biopic that results in a film like Hidden Figures or The Imitation Game. These tend to be better if they manage to enlighten the viewer on something rather than, as mentioned above, barrel through exposition and point-form facts.

It’s not clear exactly which approach Isn’t She Great had in mind when tackling the life of novelist Jacqueline Susann. It definitely seems to believe that Susann was an almost otherworldly character born to be famous no matter what. On the other, it pretty firmly makes the point that her one major life achievement was writing a book that sold a shitload of copies even though most people agreed it wasn’t very good.

Those two depictions of Susann grapple with each other through the entirety of Andrew Bergman’s shrill and uninspired Isn’t She Great, which opens with Susann (Bette Midler) as an unsuccessful Broadway actress painstakingly hacking it out in late-1930s New York. At least the timeline suggests it’s late-30s New York; the film pretty much skirts all signifiers until it’s time to go all swingin’ ’60s halfway through. Susann meets Irving Mansfield, a press agent who soon becomes her husband and fully devotes himself to propelling Susan into the mainstream. Most of his attempts don’t really go anywhere until he proposes that his wife write a book. Write a book she does: a trashy, gossipy and supposedly unpublishable bit of pulp titled Valley of the Dolls that eventually makes it to the page thanks to a hip, swingin’ book agent (John Cleese) and his considerably stuffier and more buttoned-down editor (David Hyde Pierce).

Isn’t She Great takes the form of a tacky sitcom broken up into bite-size pieces. Forget the idea of “sequences” and get used to scene after scene of Midler and/or Lane entering stage right wiggling their eyebrows and pumping out some caricatural zingers at top volume. The camp aesthetic is in full force here, if you couldn’t tell from the casting… until it isn’t. It’s one thing to make a fun, zippy, pink-hued comedy about a brassy dame who clawed her way to the top — but Isn’t She Great is still beholden to some version of the truth, and the truth is that not all of Susann’s life was so pink and poppy.

Mansfield and Susan had a son, Gus, who was severely autistic and placed in a home as a toddler. Around the same time, Susann began a long battle with cancer that would eventually claim her life. What this darkness does to Isn’t She Great is make every dramatic moment feel cheap and unearned, and every attempt at prolonged comedy (such as the first sequence where the stuffy editor visits Susann’s home, which unfolds as the world’s most feeble and ill-timed door-slamming farce) feel anemic. Consequently, Midler and Lane struggle with finding the firm, temperate middle in their performances and instead settle on the extremes, mugging wildly for the sake of comedy and staring at their feet when it’s time to get sad.

You’d be forgiven for assuming that the point of Isn’t She Great is to draw parallels between Susann and Midler, opting for the Man in the Moon approach where the star is so intimately drawn to the material that they can’t help but see themselves reflected in a subject’s life. But Midler has nothing to do with Susann, and she’s seemingly been cast with the caveat that she’ll be given as many Bette Midler-esque things to do as possible in the film’s 96-minute runtime.

Isn’t She Great was met with uniformly terrible reviews when it came out, landing on many worst-of lists and even garnering a Razzie nom for Midler. Isn’t She Great is pretty bad, but it actually doesn’t seem to have gotten any worse with time. It’s slightly more prescient now than in 2000, what with the new proliferation of people being famous for the sake of fame. There are even a few good things about it, like the extravagant production design and Stockard Channing (who actually looks a lot more like the real-life Susann than Midler) as Susann’s overly dramatic actress friend.

There are also things about it that have aged terribly, like the post-Austin Powers cartoonish ’60s stuff (including a cameo from a bargain-bin Jim Morrison impersonator) and the vomitous easy-listening Burt Bacharach score that blares over every scene regardless of intended feel. (Much of it sounds like Bacharach is about 75 per cent of the way to remembering how to play “The Look of Love” from memory.) It’s not a lack of material that sinks Isn’t She Great. Though I wouldn’t call Susann “imminently interesting,” there’s something that could be made from a life that was, if nothing else, completely singular. It’s a lack of perspective, of understanding of what its story could be about besides an endless series of one-liners and plastic backdrops. ■