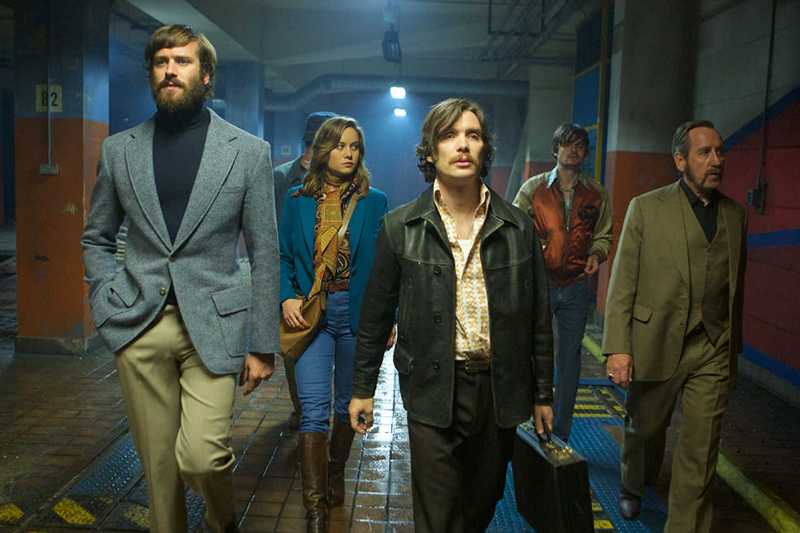 Film festival interviews generally take the form of a roundtable, in which press outnumbers the talent by ratios of at least four to one. This is definitely the most convenient and time-effective way to conduct an interview, if not the most personable. It does beg the question, however: what if there is more talent than press?

The cast of Ben Wheatley’s Free Fire is sprawling, and they were pretty much all giving interviews at the same time at TIFF last September. It was in keeping with the film’s rambunctious spirit and blood-spattered spirit of camaraderie that the majority of the cast (Brie Larson, Babou Ceesay, Sharlto Copley, Michael Smiley, Sam Riley, Noah Taylor and Enzo Cilenti, some — though I shan’t dare reveal who — toting complimentary Heinekens) joined Wheatley in the cramped press lounge for what was dubbed a “free fire roundtable”.

“I’m really glad we have a big cast,” says Copley, the first to enter the increasingly sweaty press lounge.

The cast breaks out into rapturous applause when Larson walks in. Everyone has taken a seat on a large sectional couch, but Larson is forced to sit in an absurdly high chair.

What followed was a flurry of one-liners and insanity in line with the film, which focuses on two rival groups of gangsters who meet in an abandoned warehouse in 1970s Boston in order to complete what seems like a routine arms deal. Tensions flare almost immediately, guns are drawn, allegiances are tested, kneecaps are blown off.

Of all the cast members, who would be the likeliest to make it out?

“He looks like Ken and he can shoot. He’s not even here,” says Copley.

“He can do anything! He can play ping-pong, he’s good at darts, he’s handsome… What a prick!” says Riley.

What’s different about working with Ben Wheatley as opposed to any other director?

“Ben gives you the character and you’re expected to just run with it,” says Larson.

“Actually, he lets you feel like you’re doing that, but he’s in complete control,” adds Riley.

“Is he? Fuck!” exclaims Copley.

“He gives you enough that you love your character and you want to do it to the best of your abilities,” says Smiley.

“Because I’m sphinx-like and don’t give anything,” deadpans Wheatley.

What was it like sharing a scene with a castmate who basically spend the whole movie on the other side of the room?

“I cried a couple of times, ‘cause I really felt it, y’know. I emotionally overreached a lot, ‘cause I’m Irish and I’m sensitive. You know, we’re the crying, singing Europeans,” cracks Smiley.

“It was loud! I know it sounds pretty obvious but it was incredible. It’s just gunfire constantly and you’re sitting there with earplugs, and trying to perform most of your scenes with earplugs is pretty unique,” says Copley. “I hadn’t had that much of a movie to do with earplugs in.”

“The earplugs are really good, and yet, you can still hear Sharlto through them,” adds Smiley, cracking up the room. “There’s something about the frequency of the South African accent, it cuts through everything.”

“I wish you were this funny in the movie,” Copley snaps back.

How much of the script was improvised?

“I honestly don’t remember what was scripted and what wasn’t anymore,” says Larson.

“And Amy was rewriting it as we were shooting, wasn’t she?” says Wheatley. “So there was improvisation incorporated into it as we shot, and I was also editing as we went. Not in the evenings, but literally as we were shooting it. I wanted to get that feeling they had in the ’50s and ’60s with live TV. It was straight off the cameras and into the edit suite. It was really free like that, and it’s good that you can’t remember.”

“There’s a fair bit of improv, but it’s also pretty true to the script,” adds Taylor.

“And that’s why we had you talk!” says Taylor.

Did the shoot reflect the film’s pace, which grows more hectic and fast-paced as it progresses?

“We shot it chronologically,” says Wheatley. “Otherwise it would’ve been really difficult to keep track of the wounds and the general destruction in the building. That was a decision that was made very early on. The script itself is structured in terms of goals and tiny missions, so, yeah, we knew what the pace would be. Basically the film reaches a kind of crescendo and then goes back down because you couldn’t keep it full tilt for the whole time.”

“My favourite parts were those mad moments where the camera was basically at the back of the room, and we’d fill our pockets with bullets,” says Riley.

“We’d do five pages at a time and then we’d do another five pages, but by the end of two weeks we’d do 13 pages in one go,” adds Wheatley.

“And do you guys remember the rehearsals? We had to go BANG, BANG, BANG!” says Copley.

Is this the most fun you’ve ever had on a shoot? It certainly seems so now!

“I’ve had fun on all the films, to be fair,” says Wheatley.

“But this one was the most fun, right?” adds Larson.