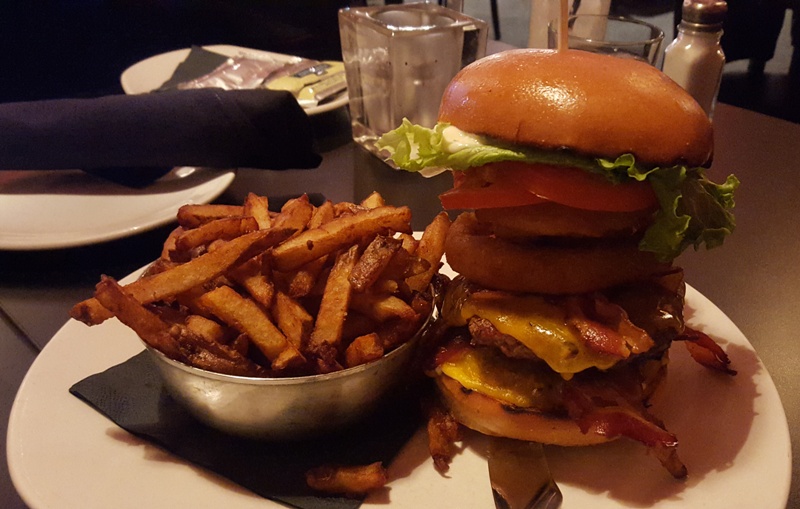 The Ultimate Burger at the Rail Coal Fire Bistro

A fire ripped through a Kahnawake strip mall in January, burning the popular 99 Restaurant beyond repair. 99’s massive menu combined family-restaurant staples with casse-croute faves and feasts for carnivores, and it was licensed, too — a total crowd-pleaser. No wonder it was one of the top-rated eateries in the area.

It’s a shame that it took the bad news of 99’s razing to pique our interest in rez dining (which is tax-free, by the way), but that’s how it went down. Having only attended one powwow and one wedding in the small town, my man and I embarked on a series of trips over the Mercier Bridge to Kahnawake to try out what are said to be its top three restaurants. 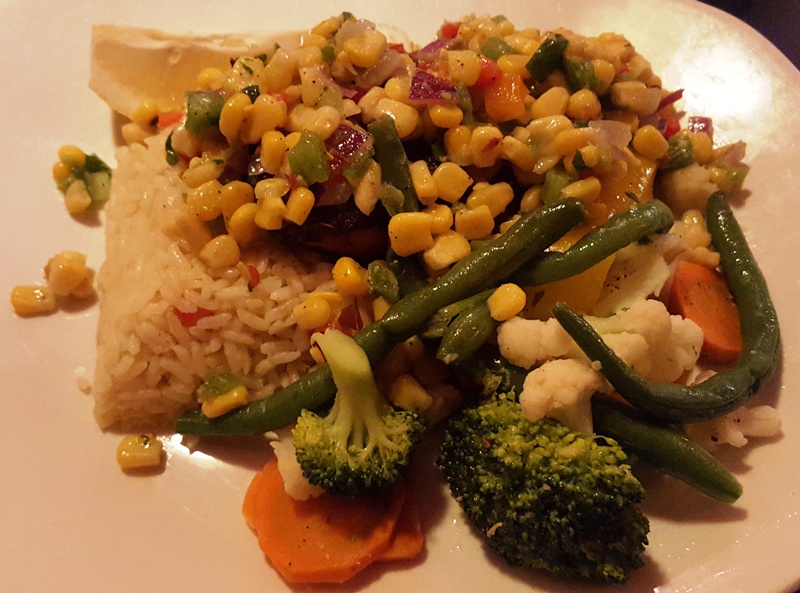 Blackened salmon (it’s in there somewhere) at the Rail

Our first stop was the Rail Coal Fire Bistro, the restaurant and bar connected to Kahnawake’s poker club, Playground (whose players eat and drink at Rail for free). After passing through the game space, which was already well-populated and tension-filled by midday, we were seated in the dining room, a suitably versatile space considering its status as a sports bar (complete with multiple giant screens) and go-to for business lunches and family dinners. That said, its atmosphere was surprisingly casual and almost cozy.

Because of its tie to the poker club, Rail serves all meals from early morning to the wee hours. The lunch menu alone was a heavy read, packed with decadent dishes and some token light alternatives. He ordered the Ultimate Burger, a supersized version of the house Rail Burger: two all-beef patties with twice the bacon and cheese plus lettuce, tomato, fried onion rings and jalapeno mayonnaise, and he swears it was one of the top three best burgers he’s ever had. I was less impressed (but still satisfied) with my blackened salmon, seasoned Cajun-style with corn and salsa, sautéed seasonal vegetables and rice — while the meal was hearty and fairly flavourful, the entire plate was over-salted. 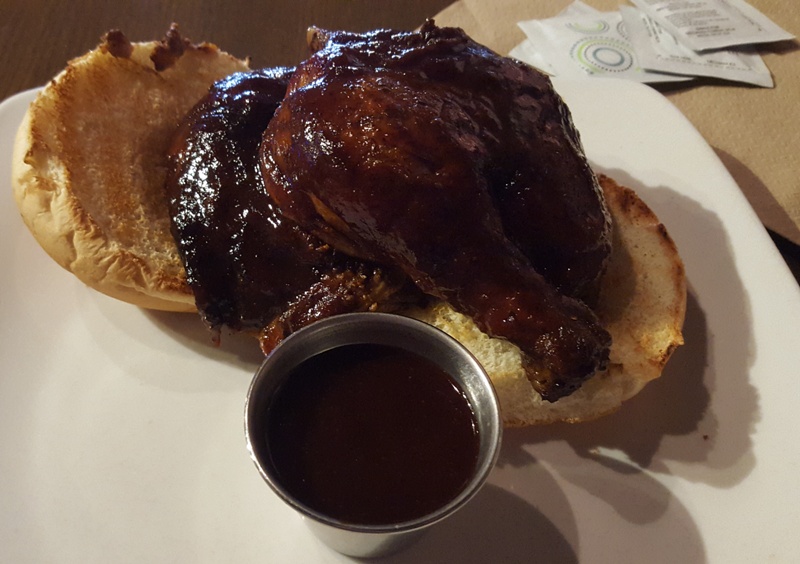 Salty and meaty were two characteristics that carried over to our next meal in Kahnawake, at Robbie’s Smokehouse & Burger Bar. (As a pescatarian with a family history of heart disease, I was not the one leading the way on these excursions.) Robbie’s exemplifies a trait that’s become a bit of a cliché of Canada’s native communities: an affinity for Americana that extends from Southern/trash food to country music to Old Glory itself, all of which was on hand at Robbie’s. 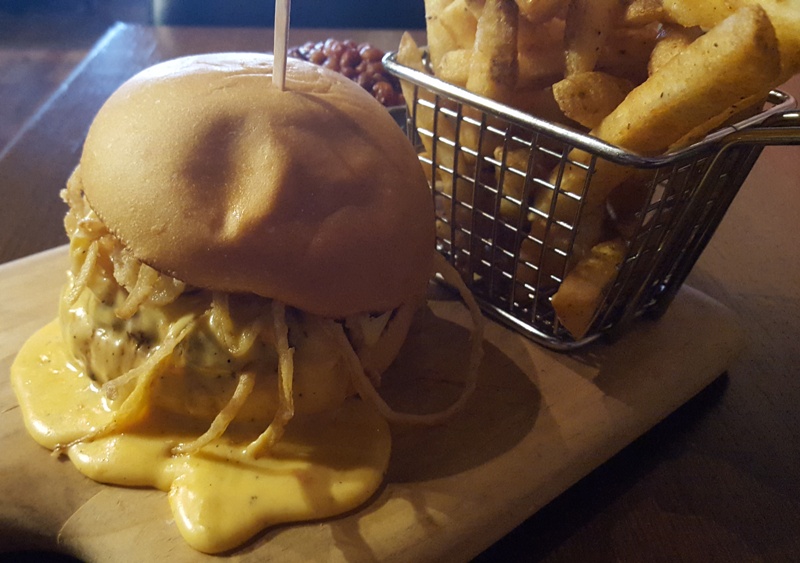 We sat in a corner emblazoned with a stars and stripes backdrop to peruse another epic menu: 21 varieties of burgers, multiple pulled meat, smoked meat and grilled cheese sandwiches, seven steaks and 11 smoker options, with different cuts, quantities and combos of chicken, ribs and brisket — and that’s not to mention cocktails and wines, salads and desserts. He ordered a quarter BBQ chicken — coated in a thick, sweet brown glaze that most closely resembles a basic Kansas City-style BBQ sauce — and praised the smoky flavour and tender texture of the meat. Less impressive were his Robbie’s burger, topped with fried onions and drowned in a bland cheese sauce, and my virgin jungle juice cocktail and mason-jar cheesecake. Chicken aside, we left disappointed but blamed ourselves (in part) for having made poor choices. 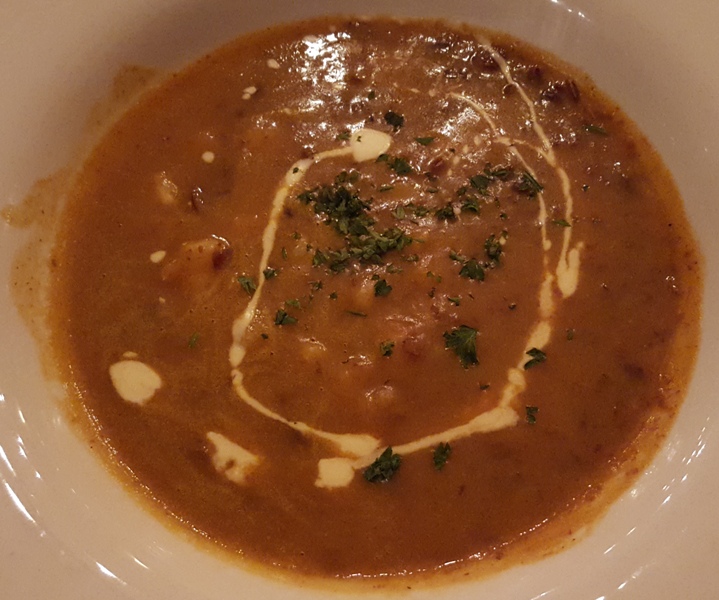 Last on our list of culinary adventures in Kahnawake was Xavier’s Steak & Wine Bar, a jackpot for fans of specialty steaks and private imports. As opposed to our previous stops, Xavier’s offers a fine-dining experience, with considerate and informative service and a refined aesthetic, from the plating to the decor to the staff uniforms. And while the cuisine on offer was far from the all-American focus of the other restaurants we tried, their menu was almost equally eclectic: a dozen appetizers (not including separate soup, salad and sides sections and cheese, charcuterie and seafood platters), pasta, sandwich, chicken, beef, pork and seafood mains and eight kinds of steak. 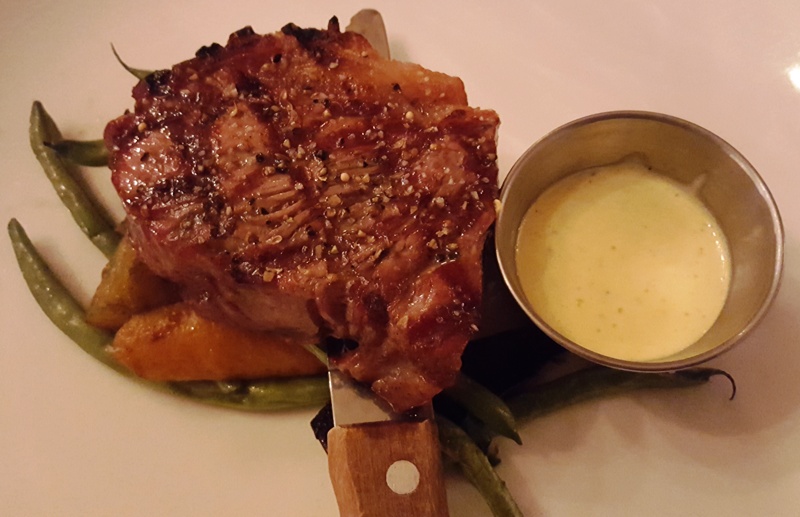 While I once again opted to keep it minimal and order a three-sisters soup — a traditional Iroquois purée of hominy and kidney beans, butternut squash and mild seasoning that was simple and delicious — he chose one of the house-specialties: a New York cut of dry-aged steak, made with Canadian Prime beef sourced from  the same organic farm near Ottawa that supplies Justin Trudeau. The 30-day “dry-aged” prep process is said to concentrate and enhance flavour as well as heighten tenderness, and my omnivore companion attested to its unique qualities — it was easy on teeth and taste buds, he said, as were the excellent fries and Béarnaise sauce on the side. A shared slice of dense, crumbly chocolate cake capped our Xavier’s experience perfectly.

Though our meals may have been hit and miss, eating out in Kahnawake’s sparse commercial strips was a novel out-of-town experience that bears repeating. Luckily it’s only 20 minutes away. ■