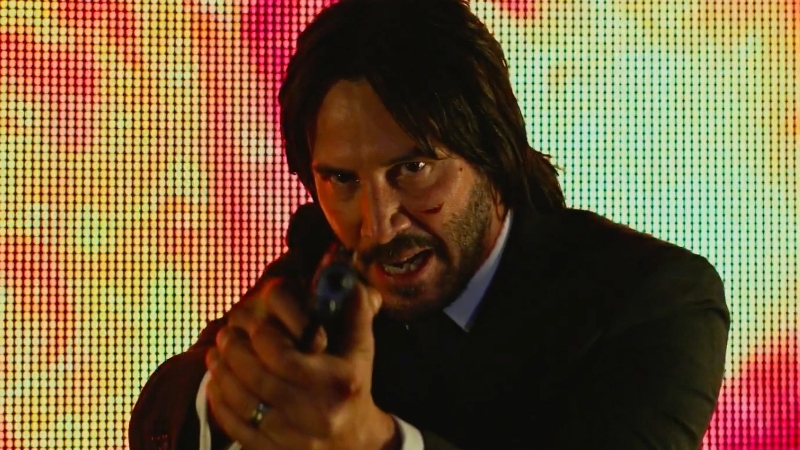 I have to admit that I wasn’t particularly enamored with the first chapter of the John Wick saga. It was certainly slick and propulsive, but not particularly different from the flood of old-man revenge movies that it found itself mired in upon release. It was a fine, forgettable B-movie that nevertheless found a surprisingly large following — and it took me a second chapter to start wrapping my head around it.

As a character, John Wick, isn’t particularly witty or badass in the action movie mold. He wears a sharply-tailored suit and everything, but he looks greasy and sleepy and resigned, and any time he manages to place a one-liner, it feels cumbersome and alien to him. John Wick is the action hero in an existential struggle — there is nothing that John Wick hates quite as much as running around killing people, and it just happens to be the thing he’s the best at.

The second installment of the John Wickverse finds our hero wrapping up the loose ends of the first film, reclaiming his famed muscle car from a Russian gangster (Peter Stormare) and settling in for life with his new dog and big, empty house. He’s almost immediately rousted from retirement by Santino Marchesi (Riccardo Scamarcio), the son of a prominent gangster who calls upon a long-dormant blood pact between him and Wick in order to have his own sister eliminated so he can claim his spot in the organized crime hierarchy. When Wick refuses in no uncertain terms, Marchesi asks a little less nicely — by torching his house. Forced back into the international criminal underworld, Wick soon finds himself chased by a revolving crew of deadly assassins, Ruby Rose and Common being the two most prominent (though in the world of John Wick, assassins are hiding around literally every corner).

There’s something patently ridiculous about this world overrun with hitmen constantly waiting to go and take down any target text-messaged to them. (Any and all hit orders come from an antiquated switchboard run by tattooed rockabilly ladies, who punch out executive orders on old typewriters and ’80s-style green-on-black computers — an international fleet of on-call assassins then receive a text message, and we rapidly understand that everyone in the world wearing a suit is probably a covert assassin.) It moves the film into almost complete abstraction, a black-and-white world where there are no innocent casualties and gunfights in broad daylight are met with mild annoyance by the handful of people walking around who aren’t also covert assassins.

Despite all of this, John Wick’s preferred method of dispatching bad guys isn’t by jumping up against walls and drop-kicking them in the trachea from great heights. The film continues the first chapter’s tradition of “gun-fu,” a mixture of martial arts and shooting people in the head at point blank range that never feels fully realistic but still, somehow, seems grounded.

The film’s aesthetic remains a little tacky, from the ’90s-style, gunmetal grey font of all on-screen subtitles (recalling deodorant packaging with “extreme” aspirations) to the an overuse of thumpy industrial music. And the rat-a-tat pacing, while certainly keeping things exciting, also makes it obvious that the film is structured almost exactly like a videogame, with Reeves moving through levels and “bosses” (generally played by recognizable character actors) intercut with mumbly scenes of exposition that the viewer unfortunately can’t skip through. These are mostly offset by fluid direction and undeniably effective action scenes in a variety of locales that often have more to offer than the usual industrial-wasteland tones of action cinema. (Particular props to the shootout between Reeves and Common in a subway station that, for all intents and purposes, can best be described as “exceedingly polite.”)

Yet John Wick’s ace-in-the-hole is also its most obviously flawed one: Keanu Reeves. Reeves isn’t the most expressive actor in the best case scenario, so it’s not surprising that he gives a ton of stilted line readings in the handful of moments between the ass-kickings he doles out here. Reeves seems confused and sometimes robotically unconvinced of the things he’s saying; it’s not, by any stretch of the imagination, a good performance, but it is unquestionably the right performance for a film where hyperrealism and surrealism are often interchangeable. It seems, somehow, entirely plausible that Keanu Reeves would have a lot of trouble taking down a 400-pound sumo-looking assassin; it does not seem plausible that John Wick would even have an altercation with that dude, and it absolutely does not matter. Reeves’ entire performance is beset with a kind of uncomfortable surrender that lends the film a bizarre (and perhaps not entirely intentional) metatextual quality.

The first John Wick drew comparisons to the early, cacophonous films of John Woo and Tsui Hark. I’m not sure I would agree with that comparison as far as the first film is concerned, but I was definitely convinced of it by the time John Wick: Chapter 2 rolled around to its final set-piece: a disorienting shootout that unfolds in a contemporary art exhibition that presents a gooey, psychedelic take on the common carnival mirror maze. There’s no reason why a Hollywood action movie should ever wind up tearing through the Met (for some reason, the film’s chief villain makes it his headquarters), except that it looks cool as hell, and it’s certainly better than greyish-brown subway tunnels or an airplane hangar.

I don’t really subscribe to the turn-your-brain-off-at-the-door approach to watching movies that are dumb or somehow considered less-than. Pleasure is pleasure, and although I may feel sheepish standing up for something that’s widely considered to suck, I don’t think that what I feel should really be considered guilt. I will say that John Wick 2 is an aesthetic triumph above, say, something that made me think about literally anything beyond the fact that Keanu Reeves wears a turtleneck with a suit for an absurdly large percentage of the film. It’s an extremely well-done, extremely preposterous action movie that I suspect had nothing more in mind than exactly what it delivers — and perhaps even less. Intentional or not, it’s as close to pop art as action cinema has gotten lately.

PS: Part of John Wick: Chapter 2 was shot in Montreal, though such a minimal part of the final product has any recognizable architecture that it doesn’t really qualify for a Made in MTL. I spotted two or three shots within an extended subway shootout sequence that were filmed in Place des Arts metro and that’s about it. ■