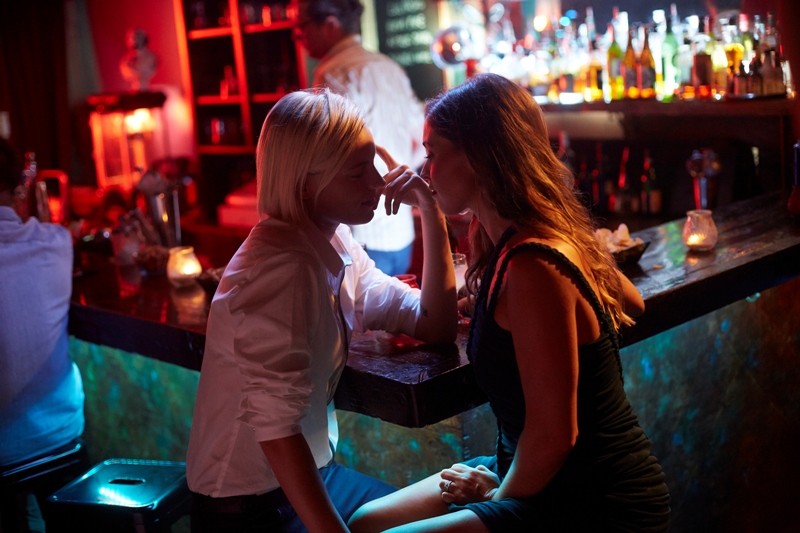 Erika Linder and Natalie Krill in Below Her Mouth

In the history of cinema, films about lust, romance and love have typically taken a male perspective. Even Blue Is the Warmest Color, which is ostensibly about a relationship between two women, was constructed from a male perspective and with consideration to what men may find appealing in the story. That’s not terribly surprising if you consider how skewed the stats have been towards men in the industry, but filmmaker April Mullen was aiming to change that with her film Below Her Mouth. Made with an entirely female crew (there are a couple of men in the cast), Below Her Mouth explores a passionate affair between two women in unflinching detail.

It’s certainly new territory for Mullen, whose previous work has been mostly comprised of genre films like the horror-comedy Dead Before Dawn 3D and the thriller Farhope Tower.

“I really love a challenge and I do feel drawn to all sorts of material,” says Mullen. “It just happens that when you start making features, you get on a roll and that’s what you end up making. Thrillers tend to sell really well internationally, so with my production company, that’s what we started gravitating towards. It’s a luxury to be able to shoot a drama, especially one that focuses on just two characters. It’s a luxury and it’s a change of pace, and I love sitting there with the characters and watching their arcs, really sit in the moment and breathe. I was really excited by the challenge. And, definitely, I’ve always had a love story in me — I was just waiting to tell it!”

Swedish-born Dallas (model Erika Linder, making her feature film debut) works as a roofer in Toronto. Having recently broken up with her girlfriend and moved out on her own, Dallas meets the buttoned-down Jasmine (Natalie Krill) — whose neighbours’ house she also happens to be roofing — in a Toronto bar. Sparks immediately fly between the two, leading to a passionate whirlwind love affair that’s complicated somewhat by the fact that Jasmine is about to be married — to a man (who happens to be away on a business trip).

“Because of its subject matter and the intimacy, we really wanted to bring to the screen something unique,” she continues, “seeing what it’s like, through the gaze of a woman, to fall in love and lust and what that feels like for a woman. Going in with that in mind when I was shot-listing, blocking and sort of choreographing and production-designing everything to do with the film, I had to constantly forget about everything I had watched — advertising, TV or film — that were primarily made with male audiences in mind. I had to forget about all those images I had been exposed to my whole life when it comes to sex and intimacy and love and just look inwardly and be really attuned to what affects me as a woman and what really turns me on and what draws me close to want to be intimate with someone.”

Though the film has a pretty traditional structure, its middle act is notable both for its relative abstractness and the explicit nature of the sex scenes between Linder and Krill. “If you ever have experienced that or been lucky enough to live through something like that, you lose track of everything,” she says. “Time, space, everything become a blur and you really need to be close to that person. We really wanted to depict that between the two of them, but an hour and a half is a tight time frame for a slice of life!”

One surmises that a film so intimate requires a large amount of trust between the director and the actors; Mullen confirms that notion. “We spent a lot of time together before the film,” she explains. “That was really important to the team in terms of getting to know them as people. They started to really know each other in life, as well. We saved their first kiss for on-screen, and we shot in sequence for the most part, which is not traditionally done in film. Usually the schedule dictates the sequence, but we tried as hard as possible to shoot in sequence. The first time they were together in the film, that night was the first they were actually together. We were actually able to build on the momentum of them getting to know each others’ bodies, the first time versus the second time… All those things sort of built, and I think the audience can really feel that.”

For a director whose previous work often swung on its perceived profitability, Below Her Mouth remains a daring movie. “It’s a bold film whose subject matter is actually illegal or completely prohibited in many parts of the world,” explains Mullen. “This film won’t be able to be seen in a lot of places, and won’t be able to be shared with audiences, never mind the big screen. We live in Canada where love is love and we can be free creatively and express ourselves. That’s a gift on its own, but yes, I would say there are extreme challenges when making a film like this.”

I mention that a group of young women were present at the press screening where I saw the film, and all of them were already seeing it for the second time even though the film had only played Montreal once at FNC. Clearly, the film has already started to find an audience. “That’s so exciting!” exclaims Mullen. “That’s definitely the audience that’s responding to it – the younger generation that’s gender-free and love for love. I think they’re aching for stories where they can identify with both sides. It doesn’t matter if it’s male or female — it’s just a love story.”  ■

Below Her Mouth opens in theatres on Friday, Feb. 10