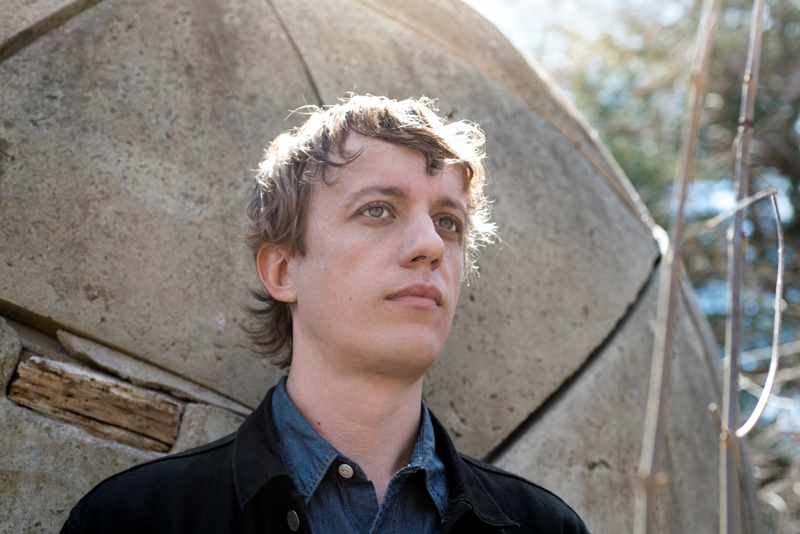 The open road, the endless horizon — Steve Gunn’s winding guitar riffs and expansive, engrossing, ambiguous lyrics capture that travelling man’s essence like few other troubadour songwriters. The burgeoning indie rock star, who hails from Pennsylvania and first became known as a member of fellow Keystone State guitar prodigy Kurt Vile’s band, has been garnering plenty of praise since the release of his solo album Eyes on the Lines late last year. And before this journeyman musician makes his way to Montreal for a gig on Jan. 13, he told me more about his nomadic life, starting the story with a surprise twist: setting it not a tour bus, as expected, but instead on a revved up, sputtering hog.

Kyle Mullin: I was watching your music videos, and really enjoyed the clip for “Ancient Jules,” where you’re on a motorcycle and driving on the highway. It must’ve been fun to shoot.
Steve Gunn: Oh it was. I’m friends with a guy, Michael Chapman, who has been playing and touring since the mid-’60s. He’s this incredible songwriter that I befriended a few years ago, and we’ve toured together quite a bit, and I like to go visit him. My label sent a guy from London to shoot the video, and he made an impromptu video out of me spending the day riding the motorcycle and hanging out with Michael.

KM: Watching it made me think to myself — because most musicians tour on busses— “Does Steve tour on a motorcycle instead?”
SG: (Laughs) I wish. That’s a dream of mine. Maybe even a bicycle, if not a motorcycle. I’m a wannabe biker, really — I just hop on friends. I don’t even own a car. I live in New York City and ride a bike mostly.

KM: In that video there’s so much great footage of the open road. And many writers like to focus on how your music is well suited for road trips, and how your lyrics allude to travel. It made me wonder if you do a lot of writing while you’re touring and travelling.
SG: I write while on tour; it’s a good time for it because there’s a lot of sitting and waiting and driving. It’s my time to be alone and think and daydream. But I’m also still doing the bedroom lo-fi set-up that I started with as a musician years ago. I’m set up in my bedroom now actually, getting ready for this tour. So I’m up working every day, either in my rehearsal space at home or on the road.

But now I’ve graduated from recording in my apartment to working in a studio. I make the demos at home and am now working in some really nice studios.

KM: Yeah, the production on this new record is a big step forward from your previous albums. An Interview magazine article details how you’ve tried to improve not only your production but also your singing. Does that mean you use a lot of vocal techniques?
SG: I find I have to take care of my voice more and more now. I’ve lost my voice a few times, like once in Austin at an in-store performance, when my voice just slipped away. I luckily drank 50 cups of tea after that, and was ready by the next show.

KM: I’ve read that Adele, Roseanne Cash and lots of other musicians have lost their voices because of polyps. It must be terrifying for a musician.
SG: Sure, but I think people who develop polyps were smokers, and luckily I’ve never really smoked. I try to be as healthy as I can on the road, and use homeopathic remedies specifically for my throat and singing. That helps me avoid any problems.

KM: That all sounds very different from when you were a kid — you once described yourself as a “snarky skateboarder” who went to Danzig concerts with your sister as a boy.
SG: (Laughs) Yeah my dream of being a hardcore punk star faded quickly. It didn’t take me long to realize how formulaic and limiting it was. Though I still like that music, I quickly got into jazz and more experimental music. I’m sure my younger self would look at who I am now and be surprised, but he’d also be happy that I’m not a car mechanic or something, and that I’m sustaining myself with music at least. ■