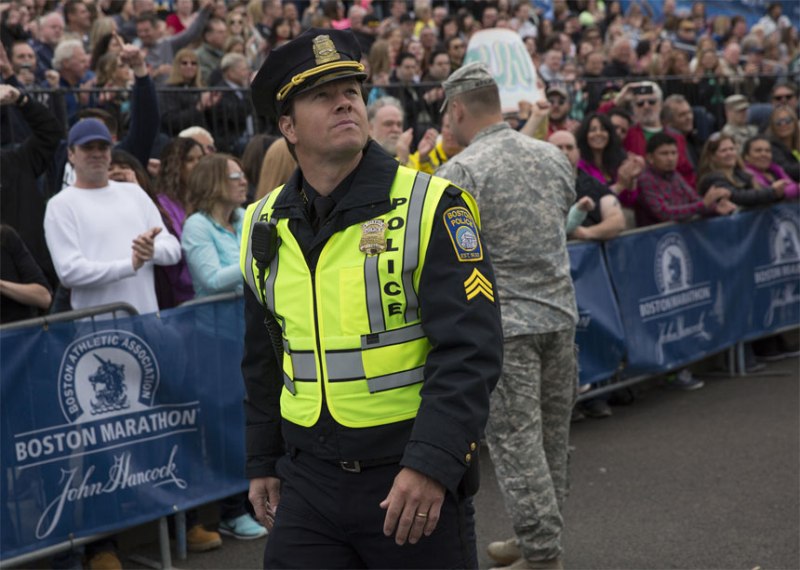 It’s natural, I think, to feel an overwhelming sense of dread when you learn that a film about the Boston Marathon bombings has come out of Hollywood starring none other than Boston’s most Bostonian representative in Tinseltown: Mark Wahlberg.

There’s a very real possibility that this horrible, infamous day in American history would be given the Michael Bay treatment, gussied up and pumped with equal parts steely patriotism and splashy sentimentality. There’s a version of this movie out there that features two star-crossed lovers separated by tragedy, a lovable moppet who tears at our heartstrings, a heroic cop who goes above and beyond the call of duty and the woman who loves him and sits at home, worried: this is exactly that film. But Peter Berg is not Michael Bay.

Or rather, Peter Berg is no longer Michael Bay. Since the flop of the very Bay-esque Battleship (a board game adaptation featuring Rihanna, Taylor Kitsch and Liam Neeson taking on fucking space aliens from the confines of a naval battleship, must I remind you), Berg has dedicated his big-screen career to a very specific kind of film: true-life “disaster procedurals” starring Mark Wahlberg — and he’s not half bad at it, from what I’ve seen. Deepwater Horizon was one of the year’s pleasant surprises, a big-budget disaster movie that, while allergic to character development and deeply in love with CGI fire, was significantly more dedicated to a meat-and-potatoes approach to storytelling than you’d expect from that subject/star combo.

Berg uses much the same method with Patriots Day, though the nature of the story told here does force him to indulge in more melodramatic clichés and broad patriotism than in the previous film. The bombing only constitutes a small part of the film, which is instead dedicated mostly to the harrowing chase for the Tsarnaev brothers that kept Boston on lockdown for days after the attack at the marathon’s finish line.

Wahlberg plays Tommy Saunders (the only major fictional character in the film), a Boston cop with a bad knee and a worse attitude who’s assigned to the finish line as penance for roughing up a vice cop some time before. Saunders is in the heat of the action when a couple of bombs go off hours into the marathon, a heavily attended Boston tradition. Caught in the middle of the carnage, Saunders feels a unquenchable need to find the perpetrators, a task considerably complicated when the feds (led by Kevin Bacon) move in on the situation and begin tracking down what turns out to be Chechen brothers Tamerlan (Themo Melikidze) and Dzhokhar Tsarnaev (Alex Wolff).

The biggest strength of Berg’s approach is that it covers a lot of ground at once, meaning that the film has so many threads and characters that it can’t really be bogged down in too much corn. A handful of survivors’ lives are profiled from the disaster’s preamble to its aftermath, but Berg stops way short of showing us a burnt-up picture of their loved ones floating in the breeze (as Bay did in 13 Hours). Even the perpetrators are depicted as more than just faceless demons, though Berg stops well short of trying to elicit any sympathy for them.

That’s not to say that the film isn’t designed for maximum impact. Almost all of the characters’ slice-of-life preamble is depicted through their romantic pursuits, and Berg indulges in some extremely wack heartstring-tugging when he frames a couple frolicking in bed by focusing mostly on their feet — because they will subsequently lose those feet in the attacks.

Berg is surprisingly good at calibrated cacophony. Patriots Day is at its best when it moves along breathlessly with few pauses for slow-motion emotion and Wahlberg speechifying (there’s only one of these, surprisingly). The search for the suspect (which also ropes in the Boston police commissioner, played by John Goodman, and nearby Watertown’s sheriff, played by J.K. Simmons) was a real-life event that I remember as being suspenseful as hell just sitting in my house — unsurprisingly, it plays like gangbusters even considering Berg isn’t afraid to get his hands dirty with the most unglamorous of details.

All this, however, does point to the film’s biggest fundamental flaw: that these events are so recent that there’s absolutely no water under the bridge. (Tamerlan Tsarnaev’s wife’s trial isn’t even over — a fact that the film makes abundantly clear.) There’s definitely an upside to the ripped-from-the-headlines aspect of the story, but the fact that the film includes the longest documentary coda I’ve ever seen in a based-on-a-true-story movie also points to the real motivations behind this project: prolonging this whole Boston Proud thing by a couple of years.

It’s certainly not the most facetious or dishonest reason why any real-life event was ever made into a movie, but when a film finishes with something like 20 minutes of documentary footage of the real people whose lives you just re-enacted, it’s hard to really feel like this story was burning up the people telling it. Maybe I’m wrong — maybe Berg, Wahlberg and everyone else involved felt an overpowering desire to exorcise the demons associated with this dark chapter in American history, but maybe not. Either way, the good thing about this kind of too-soon effort is that they tend to age more gracefully than most. Ask me again in 2020.  ■