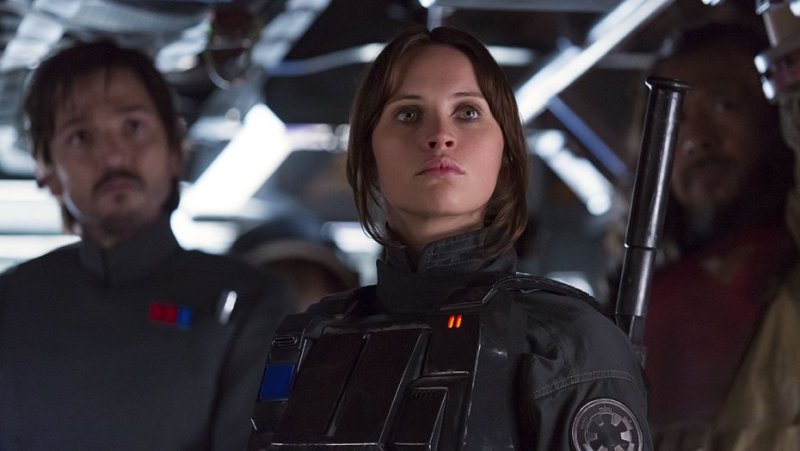 Diego Luna, Felicity Jones and Jiang Wen (in the background) in Rogue One: A Star Wars Story

As a Star Wars-obsessed preteen in the late ’90s, I read a considerable amount of the “expanded universe” books available at the time. Some of them were indescribably boring political thrillers that featured the characters I knew and loved negotiating trade agreements; others were straight-up fantastical nonsense, such as the story that followed Boba Fett as he was very slowly digested by the monster he falls into in Return of the Jedi. I’ve since fallen out of love with Star Wars,, but I’ve always wondered why the ever-expanding world of ancillary and parallel storylines never made it to the silver screen.

The new storyline concocted by Disney and the grand poobahs in charge of the franchise have perhaps made it impossible to go back to the well of all the offshoots and spinoffs created in the last 40 years, but we finally get a parallel Star Wars movie (or at least, a new one, since I guess those Ewok-centric TV movies starring Wilford Brimley would count) in the form of Rogue One: A Star Wars Story, which — as the title indicates — takes place within the Star Wars universe, but without (or with very few) of the characters we know and love.

Jyn Erso (Felicity Jones) didn’t get to have much of a childhood. Separated from her parents at a young age due to her father’s (Mads Mikkelsen) wavering dedication to the Empire, she’s raised by rebel fighter Saw Gerrera (Forest Whitaker) and left to a hardscrabble life of rebellion and rapscallionery. She eventually falls in with the rebels, particularly with officer Cassian Andor (Diego Luna), who has been tasked by Mon Mothma and the other rebel leaders to follow up on rumours that the Empire is currently hard at work building a planet-sized weapon of destruction they call the Death Star.

If the rumours are correct, acquiring the plans for the Death Star is the only hope the Rebel Alliance has of destroying it, so Erso and Andor round up a team that includes defected Imperial pilot Bodhi Rook (Riz Ahmed), a blind monk straight out of a Shaw Brothers movie (Donnie Yen), his brawnier compatriot Baze (Jiang Wen) and an irony-challenged reprogrammed Imperial robot (voiced by Alan Tudyk) to take the plans back from engineer Orson Krennic (Ben Mendelsohn, channelling Donald Sutherland at his slimiest).

In case it wasn’t clear, Rogue One occurs right before the beginning of the very first Star Wars film, A New Hope. It’s not so much a parallel story as a distantly related prequel, and let me first preface all this by saying that it’s hardly the most pressing Star Wars story that could be told. I mean, certainly it’s an exciting storyline, but I doubt that many people were truly wondering how exactly Princess Leia came to have those plans in her possession at the start of the film. In terms of completing the rich tapestry of the Star Wars universe, it’s hardly transcendent.

What director Gareth Edwards does understand about the film’s premise is that it’s a perfect way to tell a Star Wars story without telling “the story of Star Wars,” and he moves the scope of the film away from the rollicking space opera and closer to something resembling a classic men-on-a-mission film like The Dirty Dozen or The Great Escape. A lot of my recurring criticism about blockbusters (and superhero movies, more specifically) is that they completely obliterate any kind of stakes in their desire to be one square of fabric in a never-ending quilt of unspooling profit. Superhero movies aren’t genre movies inasmuch as they’re a genre unto themselves, yet they could greatly benefit from adhering to a more specific genre structure, be it a heist movie, a romantic comedy or even a horror film. Rogue One isn’t a superhero movie, but it also isn’t tainted by its inevitable proximity to them.

What results from all this is a tight, focused action film that uses its universe well without being too slavishly dedicated to it. It’s a little rough-going at first — as it turns out, some of this story was already set up in the Clone Wars TV series, and the film perhaps relies a little too much on the audience’s general understanding of the events preceding the film (it’s also, to my knowledge, the first Star Wars film that doesn’t begin with scrolling text). Edwards and his writers (which include Chris Weitz [!] and Bourne scribe Tony Gilroy) know to exploit the broad strokes of the Star Wars universe and leave the chaff and minutiae behind.

Some people might find the presence of a blind, staff-swinging monk knocking Stormtroopers across the head ridiculous, but I welcome it. Bring on the cross-genre nonsense! Leave the midichlorians behind! The last act of Rogue One is particularly rousing, a rat-tat-tat action sequence that also highlights the film as the darkest in the entire Star Wars franchise — bleaker than even Empire Strikes Back and certainly more hopeless than the majority of quadrant-pleasing sci-fi blockbusters out these days. (Granted, don’t go in expecting Michael Haneke here.)

There’s certainly something to the concern voiced by some that Rogue One was made with purely mercantile intentions. It doesn’t so much further the Star Wars universe as colour it in, but then again, it’s really bizarre to attack an extremely expensive franchise that was always designed to sell toys for the cardinal sin of wanting to continue to sell toys. There’s something about Rogue One that feels useless — but then again, who’s to argue that any movie is useful? ■

Rogue One: A Star Wars Story opens in theatres on Friday, Dec. 16 (with advance screenings on Thursday, Dec. 15). Watch the latest trailer here: