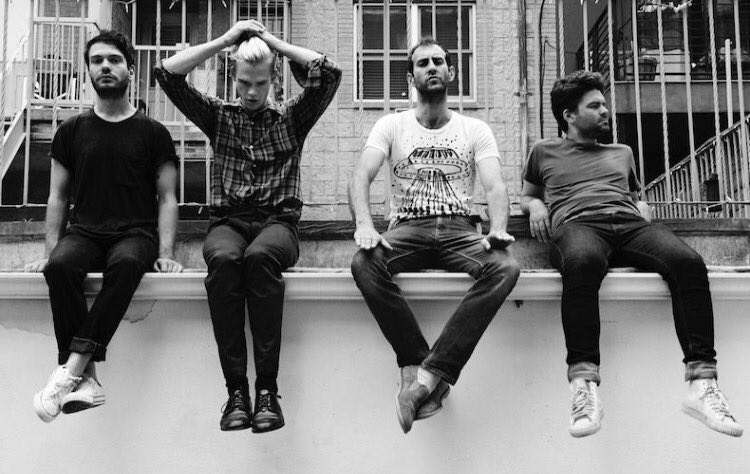 Less than two years after releasing their first album as Viet Cong, Preoccupations have re-introduced themselves with a solid self-titled record. Although the band’s line-up remains the same, the name-change coincides with a re-imagining of how they operate. Highly contrasting instrumental approaches and more emphasis on open space make for a sense of unpredictability.  Also, the discordant lyricism adds an element of tension, which may be reflective of some of the group’s experiences on the road.

Now the band is primed and ready for another long North American and European tour, which hits Montreal this week.

Donovan Burtan: So it’s been a relatively short time since your last album. How did this one come together?

Matt Flegel: By the time the self-titled Viet Cong record came out, we had already been touring around those songs quite a bit, and there was no haste or pressure to make a new record or anything. A lot of it was just us — we wanted new songs to play. We just took any time we could in between tours and went into a bunch of different studios. All in all, we ended up recording in about five different spots. I guess it was not really a long time for fans, but for us we were just playing those songs every night for two years and it was time to start writing some new stuff.

DB: That’s a bit of a different album cycle. It wasn’t necessarily go into the studio, record a bunch of songs and go show them to people.

MF: It was definitely a different method, which isn’t necessarily ideal, and a lot of stuff we scrapped. Our original plan was we had two weeks where we went into the barn where we recorded the first record. After all we had enough ideas to just go in there and bust a record out and we recorded like 80 minutes worth of music in that one session, but only ended up keeping about nine. It just wasn’t flowing very well and it’s stuff that we might end up coming back to for other records, but it wasn’t where I wanted to be going at this particular moment. It’s kind of a convoluted way to make a record in five different studios, but I like that because you get a lot more different sounds going on. The first record, you can tell the drums were all recorded in the same room.

DB: I guess it inspires more contrast if you continuously write songs and find yourselves in different moments in your lives.

MF: Absolutely, and I like how it ended up sounding. There’s more happening sonically.

DB: Besides this element of contrast, generally I find the album has a sense of discord. The single “Anxiety” is a tense song and your record label wove a narrative of you guys being in a tumultuous time in your lives including break-ups and the band’s name change.  Do you think these things are a piece of the album?

MF: Yeah, maybe inadvertently, but looking back, of course. Anytime you’re writing things it’s basically going to be a product of place and time. There was a lot of stuff going on. I mean it’s not necessarily anything mind-blowing or radical as far as things that happen in life. It’s hard to be in a band and hold onto relationships or hold on to some semblance of a normal life I guess, and I think that definitely comes out in the songs.

DB: There’s also an element of re-introduction, maybe due to the name change. I feel like when “Anxiety” came out it was a much different sound.

MF: For sure. Again, inadvertently. We knew we were going to be calling the band something different for the next record. I don’t know if this informed the change, but in the back of our minds we thought we could do something a bit different. It still sounds like the same four guys making music. We were just trying different instruments, different ideas.

DB: How did the instrumentals come together? The first one was a more traditional rock sound, but now you’re occasionally in a very different place.

MF: I think that’s our nature as musicians. You just get bored with things, want to try new pedals, effects, instruments. A lot of our writing is just trial and error. I’ll have a skeleton of an idea and we just get together and hash it out over a couple of days, or even longer than that. We’ve spent a week just finding different drum sounds. Not in the studios that we have to pay money for, but the home studio experiments. That’s the luxury of the home studio.

DB: I want to compliment you on the tune “Memory.”  I think there’s a really awesome change in pace in the middle of that tune and you actually have a bit of a Montreal connection on there, Dan Boeckner of Wolf Parade comes through with some vocals. How was it to have him in the studio with you guys?

MF: It was cool. Very random. We were doing the vocals for the first half of that song. For the second half breakthrough, I just knew that I wanted another voice, and I was literally texting Dan: “Hey, are you in town, we should hang out after we’re done at the studio.” Then I was like “Wait a minute, you wanna sing on this track?” and he just came and did it.

DB: Wolf Parade has been a pretty big Canadian band. Were they a group you looked up to?

MF: I hadn’t really listened to them up until last year when we did a couple shows with them.  I checked out Apologies to the Queen Mary and it’s an awesome record. I just don’t really listen to a lot of contemporary music — still stuck in 1983.

DB: I mean you guys don’t necessarily sound straight out of the ’80s, but that seems like the era where you pull a lot of your sound from.

MF: Yeah, a ton of it. As far as experimentation in the studio, that was just a time when people were trying to do a bunch of different sounding things. There’s so much to pull from and so many bands from that era that I still haven’t heard. So much stuff that was pretty obscure back then.

DB: I mean post-punk is one of those eras that’s looked back upon fondly, but wasn’t necessarily accepted at the time.

MF: There’s a cult following for a lot of these bands, but I don’t think they were the ones selling records.

DB: So you guys are a few dates into the tour. How’s everything coming together?

MF: It’s getting there. Like you said it’s the beginning of the tour and we had most of the summer off. We’re all fresh and healthy and pumped to be doing it again. The new songs are getting there — by the time we get to Montreal they’ll be perfect.” ■