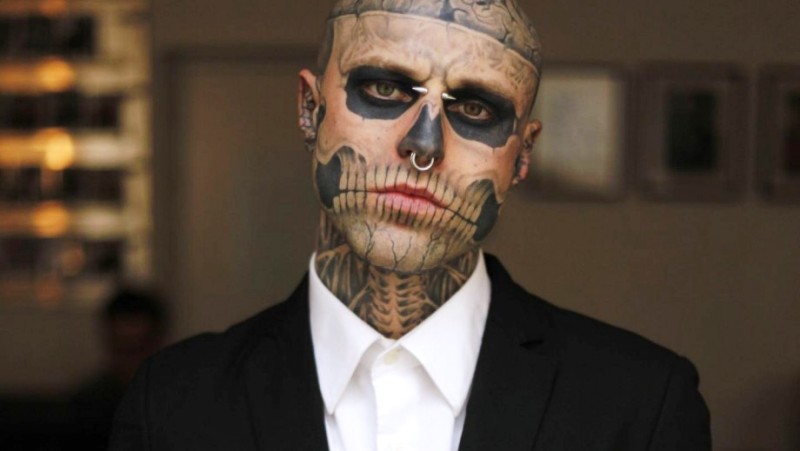 Long before Montreal’s most famous tattoo enthusiast Zombie Boy (born Rick Genest) starred in Lady Gaga’s “Born This Way” music video, walked the runway for Thierry Mugler, filmed 47 Ronin with Keanu Reeves or was immortalized in wax for the Grévin Wax Museum, he was a young St-Henri punk living in lofts along the train tracks and washing cars to raise money for tattoos, back when the neighbourhood still had more squats than condos.

When I ask him if he still lives in St-Henri, Zombie Boy laughs; “Define living!”

I met up with the performer, actor and model earlier this week at the downtown office of his management agency Dulcedo for a quick chat ahead of his performance at the Freak-Off Block Party in the Quartier des Spectacles this week.

I quickly discover that despite Zombie Boy’s affinity for the macabre and grotesque, underneath the squirming centipedes, exposed bones and rotting flesh that decorate his outward appearance, he’s a friendly and energetic fellow with a keen sense of humour who enjoys making people laugh as much as giving them a shock.

The “Freak-Off” of tonight’s party is in reference to Zombie Boy’s talents as a freakshow performer — something he’s been doing from a young age.

“I grew up doing freak shows,” he tells me. “I really wanted to take that angle in my life, like eating glass and all that nonsense. The pain for show stuff, I’m really good at that. I have a high tolerance for pain.”

Ten years ago, when Zombie Boy was about to turn 21 years old, he was testing his limits for enduring pain and had an eye on the future when he decided to embark on the skeleton tattoo project that he’s famous for today.

“I realized that I was becoming an adult and it was time to think about my future and about my career and more responsible things,” he explains.“ So I got my face tattooed with a skull!”

That may not seem like the normal path for a career-minded young man, but then again, Zombie Boy has anything but a normal career. In fact, he’s making a career out of questioning what we think of as “normal” in the first place, with an upcoming TED Talk this autumn in Austria, where he’ll be exploring the topic of normalcy through the lens of his lived experience and philosophy.

“I get so many people prejudicing, it doesn’t matter if you’re from this walk of life or from that walk of life — I get side eyebrows from everybody,” he says. “That kind of taught me in my own shoes, that no matter where you go to just ignore them. Ignore everybody and do you.

“I’ll be speaking about the idea that normal is relative. ‘What’s normal to the spider is chaos to the fly’ — Morticia Addams said that. I think those are good words and I’m going to tramp through the jungle of that subject.”

Zombie Boy has worked almost exclusively with Montreal tattoo artist Frank Lewis over the years to create his tapestry of body art, adding new works here and there and eventually connecting them together.

“Frank did the grand majority of my tattoo work.” Zombie Boy says. “I was just like, ‘I want some bugs and some bones,’ and Frank said ‘maybe throw a spider web here, and maybe a big centipede crawling through, with a tarantula on your armpit.’ We just winged it. I’ve had a couple of flash pieces but mostly we took different markers and drew the different veins, bones, bugs, etc.”

A regular at tattoo conventions, Zombie Boy tells me about meeting one of his favourite tattoo artists in Toronto.

“I went to Toronto for the ROM tattoo exhibition [Tattoos: Ritual. Identity. Obsession. Art.] and was very stoked for the first time ever to meet Paul Booth and shook his hand, and took a selfie with him. He’s been one of my heros for a long time. He’s a superhero — throw a cape on him!”

Besides tattoos, Zombie Boy’s other great love is music, which he’ll be sharing tonight via his DJ and performance set on the Melting Pot stage with DJ Alchemiste.

Zombie Boy and Alchemiste are also working together on another music project—they’re recording an album of new songs with a band led by Zombie Boy (writing lyrics and performing vocals) with Alchemiste on bass in a collaboration with former Rob Zombie guitarist Mike Riggs, with an anticipated Halloween launch for the first single.

“For the past two years and a half I’ve been working on music. We’re fortunate enough to be working with Riggs, formerly the guitarist of Rob Zombie. He’s got a big stamp on the project and working so hard with us. He’s managing a lot of the band stuff so it’s going to have a lot of that industrial, metal vibe to it, with flashes of dubstep all over it. I like to call it Korn-step, but Riggs hates it when I say that! (laughs)”

Zombie Boy doesn’t want to spoil the surprise by divulging too much of what’s in store for the crowd at tonight’s Melting Pot event, but given his performative personality and years of freakshow touring, we think it’s safe to say it’ll be an event like no other.

“The dead have no fear and fear no pain,” says the living zombie who’s made his mark by training himself to tolerate extreme pain. “If you want to smash a cinder block on me, go for it!” ■

Zombie Boy will headline the Freak Off Block Party with DJ Alchemiste and opener DJ Seb Brière at the Just for Laughs Melting Pot Stage (outside 175 Ste-Catherine W.) on Tuesday, July 19, 10 p.m., $19.45. Tickets are available here.

The outlying progressive left party produced a platform teeming with ideas and even more buzzwords.