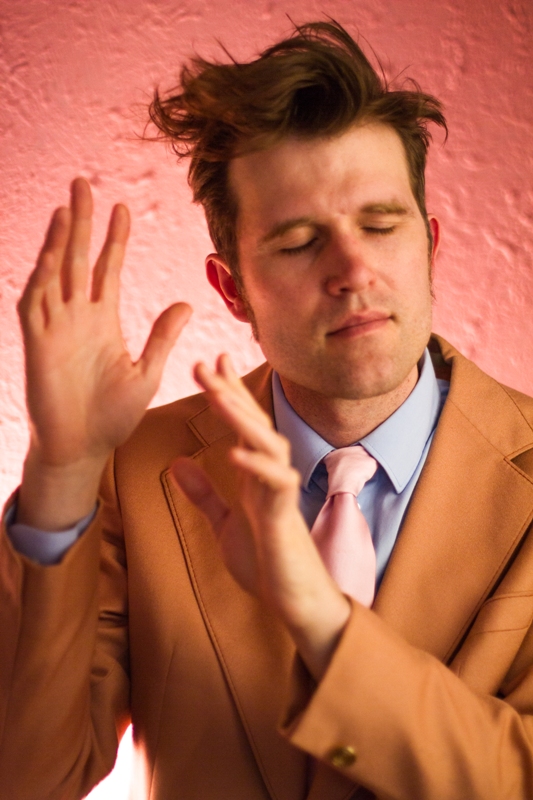 Since 1999, the World Provider has been penning and performing pop anthems, largely lo-fi productions high on melodies, riffs and a “stadium attitude.” Emerging from the Toronto scene that produced Peaches, Feist, Mocky and Chilly Gonzales, he moved to Montreal in 2001 and evolved from a solo project to a band.

Frontman Malcolm Fraser (a Cult MTL columnist, so you know) has had a number of bandmates over the years, the one constant being drummer, keyboardist and singer (and life-mate) Stacey DeWolfe. Behind the scenes (and occasionally on stage) is Dears singer Murray Lightburn, who produced the World Provider’s 2011 LP History of Pain, as well as the new EP, Always, being released on the Dears’ label/production company Ting Dun on May 27. (Scroll down for to hear a track from the EP, and see a brand new video.)

The EP features guest appearances by Fraser’s old pals Chilly Gonzales and Mocky, but the live line-up at this week’s EP release show promises a back-up band of local all-stars.

I connected with Fraser by email to discuss life, death, returning to synth-pop roots, working with significant others, the appeal of old-man bars and more.

Lorraine Carpenter: A recent life-changer for you is having a son — has fatherhood had an impact on you creatively?

Malcolm Fraser: I’ve definitely come up with a lot of lullabies and songs about poop, diapers and bums, but that’s more for personal one-on-one performances. I haven’t felt it creeping into my regular practice, but we’ll see. You never know!

LC: You recently lost a friend (and documentary film subject), musician Gordon Thomas. Outside of the personal impact of his passing, which is documented on your blog, has it affected you creatively, or altered your feelings about making music?

MF: Gordon was and continues to be a big influence and inspiration. I guess his passing provokes some reflection about the value of devoting your life to your art at all costs, and the balance between striving for success and just accepting that your art is its own reward. But nothing that’s changed my feelings about making music — not yet, anyway.

LC: I understand that your new EP is something of a return to your lo-fi synth-pop roots — was this a conscious aesthetic choice or the result of new gear or the influence of creative collaborators?

MF: When Murray produced our last album, History of Pain, he had this big spiel about how the WP was going to “graduate” from our old cheap toy synth sound. After we finished the album, he played in our band for a few shows and had to learn some of our old material. Then he did a full 180 and declared that he’d “betrayed” the original spirit of the WP and had to get it back! So for the new record, we used generally the same synths as on our old albums, but took a lot more care with the song structures than ever before. So it’s a return to roots, but a step forward at the same time, or so I like to think.

LC: Were there any other new or different techniques, guests or significant influences on the EP?

MF: Chilly Gonzales plays piano on “Pam Pam.” It has a different sound than the rest of the tunes on the record. I wanted to do a big disco tune with piano like the Scissor Sisters’ “I Don’t Feel Like Dancing.” In the end it sounded totally different than that, but I like it a lot. Murray is a big “rock” guy, but he can really bust out the dance-pop chops when it’s called for!

LC: As a Parc Exer, I love that you have a song called “Pam Pam.” I’m pretty sure, based on past conversations, that there is a connection to the bar on Jean-Talon, but how far beyond the title does it go? What is the appeal of that place for you?

MF: To be really honest, the original title was “Bam Bam” but then I remembered that there’s a famous reggae song with that title. I like to have original song titles whenever possible so I was racking my brain. Then it came to me: Why not name it after my favourite old man bar in my neighbourhood? So it is and isn’t related. I do like that place, it’s just an unpretentious, friendly neighbourhood joint. They sell mini-pitchers of BVM for $7 — I’m sold!

LC: I’ve been reading your accounts of your best and worst shows, and one recurring element of the worst shows is on-stage fights between you and Stacey during soundcheck, but I get the impression that this kind of thing is rare. Life partners as music partners is not uncommon, but there are of course inherent challenges to these kinds of creative pairings — do you have any advice for couples starting bands?

MF: It’s not always easy because as a life partner, you have to be supportive and sensitive to the other person, but as a creative partner you have an equally important responsibility to subsume your egos and issues to making the work as good as it can be. So it can lead to conflict at times, though we’re getting much better at that — no on-stage fights since those incidents which were several years ago! At the same time, doing music with Stacey is a dream come true for me, because I have these two favourite parts of my life and I don’t have to choose between them.

I don’t know if I have any advice beyond being respectful, being kind, giving each other space and all the usual couple stuff. If you think you might like collaborating with your partner, try it — you’ll certainly find out!

LC: What’s your current live line-up? And what’s this I hear about an all-star band for the local launch?

MF: For these shows, we’re trying a kind of crazy experiment. I read somewhere that Chuck Berry hires a pick-up band in every town where he plays, and I know Ariel Pink did the same thing as a stunt a number of years ago, too. So we’re trying something like that.

The Toronto show was seat-of-our-pants risky, occasionally sloppy and ultimately fun as hell. I expect much the same for Montreal, except that actually living here means we’ve been able to rehearse a little more. ■