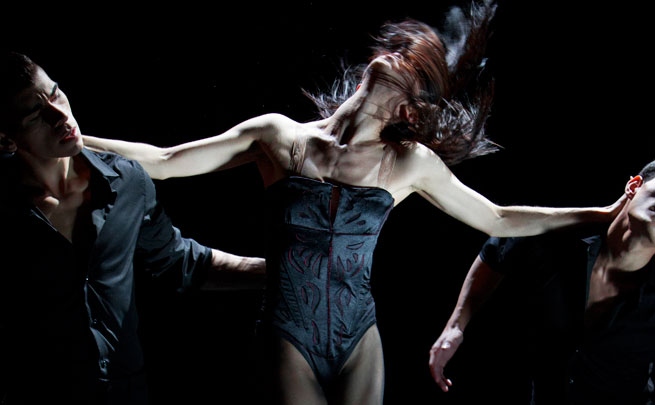 1. “The Seasons” (Vivaldi’s The Four Seasons) “a series of 12 tableaux evoking the 12 months of the year, he subjects the 12 dancers to the dizzying speed…” choreographed by Édouard Lock

3. “Gnawas,”  focusing on the four elements and related to the gnawas, “a mystical brotherhood adept of Islam, descendants of former slaves and merchants from centre and southern Africa” choreographed by Nacho Duato.

James Oscar: Can you speak about how Edouard Lock collaborate with São Paulo Dance Company for this interpretation of  Vivaldi’s Four Seasons?

Inêas Bogéa: Édouard Lock’s versatility and previous works made me invite him to create a work for us. It was a privilege and a challenge, too. I always dreamed of dancing one of his pieces as a dancer, and now it has come true in another way, because he has created something especially for our dancers. It’s been so special for them to work with a dance master!

He divided each part of the music into the 12 different months of the year and its seasons. The light created by him is full of contrasts, from deep dark to intense luminosity. In various scenes, each gesture corresponds with the light’s movement, that cuts the space like it is being edited in live action. He said that “sometimes you reveal and you hide.” We can observe many layers in the set that integrate and interfere with one on another, and create new relations to both the people that are watching and those who are dancing.

JO: How does the word Mamihlapinatapai shape what we will be seeing in the piece choregraphed by Jomar Mesquita. Is Mesquita’s deconstruction (unpacking) of a “traditional” Brazilian dance somehow related to the meanings in this word?

IB: Yes, absolutely. The word Mamihlapinatapai is a term from in the indigenous language spoken by the Yaghan, a tribe of the Fire Land (Tierra de Fuego) that means a look between two people, each one wishing the  other to make a move and make something happen, but none of them acting. And you can see this on the stage during the piece.  It deals with the desire for love between men and women.

Mesquita used deconstructed elements of ballroom dancing to create this work. The set is made with lights, also on the floor, that create a special design and draw a certain ambient atmosphere.

JO: Gnawa looks like a mystical web, a secret, hermetic community. Can you speak about Duato’s piece Gnawa?

IB: Gnawa is a piece that uses the four fundamental elements — water, earth, fire and air — to talk about the relationship between the human being and the universe. Duato was inspired by the nature of Valencia, surrounded by sea and sun, and by Mediterranean aromas, colours and flavours, to create Gnawa. He is interested in gravity and the use of the solo as key elements in constituting his dance. This interest is renewed in a ritualistic tone involving a musical trance that leads to and is driven by the movement of the bodies. ■