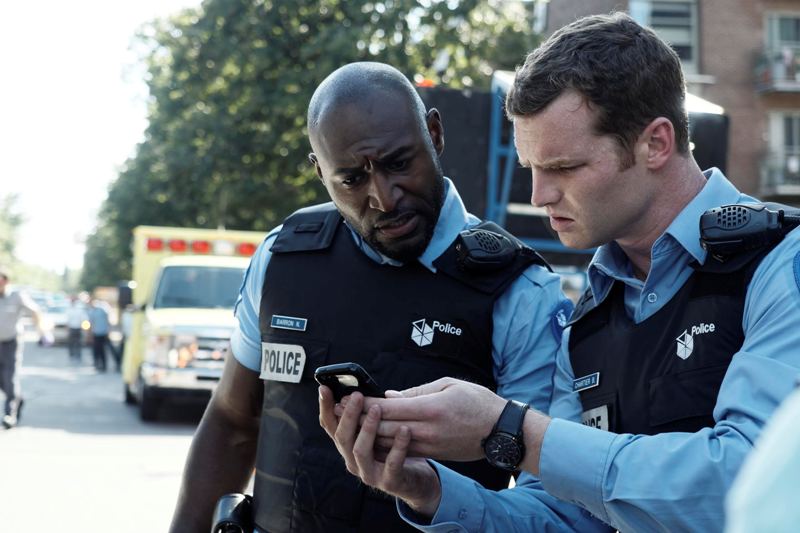 Despite any negative views or conflicted feelings we may have about cops in general or the local force in particular, both the French- and English-language versions of Montreal police show 19-2 hit notes that have resonated with viewers, critics and award committees.

Its tendency toward disturbing storylines and corrupt characters as well as “coarse language, nudity and violence” are in keeping with a lot of the best TV happening these days. More importantly, its equally gritty and banal beat-cop milieu and quality writing, directing and acting recall some of the best cop dramas of the past.

A racially diverse, English-speaking police force is clearly something that Montrealers have only experienced on TV. In 2012, Vancouver-based actors Jared Keeso and Adrian Holmes were cast in the lead roles of Ben Chartier and Nick Barron, making Holmes the first black actor to play a lead on a Canadian TV show.

“That’s a huge honour and a huge opportunity to inspire and give hope to other minorities in Canada,” Holmes said over the line from his home in Vancouver in mid-November, when shooting for the third season of 19-2 was on a brief hiatus — seven episodes were in the can, with three to go. “Leading a critically acclaimed series in my own country is the greatest gift that I could have ever received.”

Much like his 19-2 character, who transfers to Montreal from Morin Heights, Keeso is a “country boy” from the small Ontario town of Listowel (pop. 6,867), and prior to shooting the pilot he had never stepped foot in this city. Now, after living in Old Montreal for a couple of years, Keeso has moved to the Plateau and is considering settling here permanently.

Holmes remains on the West Coast, but he also has a love for Montreal that will stick for life. “I would say Montreal is the main character of the show,” he says. “We get to show the ROC how beautiful Montreal is, ’cause we shoot all over the island, and off-island, too.”

True that, but the worst of Montreal is showcased as much if not more than the best, and not just aesthetically. The city’s more ghetto, run-down neighbourhoods get plenty of screen time, and as with most cop shows, the pits of humanity are on full display, but not just with the criminals.

“The thing about 19-2 is we wanna be the truth of the job,” Keeso says. “We don’t wanna be gunslingers, we’re not glorifying anything, we’re not Hollywoodizing anything. We’re the piss, puke and sweat of the job, and the Montreal police gave us every opportunity to do it genuinely.”

Montreal cops are not only consultants for 19-2, they’re on the set supervising important scenes, like the incredibly intense 14-minute tracking shot in the school shooting episode that opened season two. Prior to the show’s production, the lead actors attended police boot camp, learned how to stand, walk and cuff perps properly and did ride-alongs with beat cops in different parts of the city.

“They asked, ‘Do you wanna see a crack house?’” Keeso recalls. “Then something comes over the radio in French, I don’t understand it, the cherries go on and the house that they were gonna show me, by the time we got there it was a crime scene. Someone from the house had gone into a restaurant and stolen the cash register so we had to go knocking on doors in this crack house looking for it. It was pretty wild. It was a real eye-opener.”

In his training, Holmes witnessed the aftermath of a (non-fatal) shooting in a Middle Eastern restaurant and rode alongside writer/producer Bruce M. Smith in a patrol car’s backseat during a white-knuckle high-speed chase. More recently, between seasons two and three, Holmes did a ride-along with Vancouver’s gang squad and nearly passed out at the sight of flesh wounds inflicted by police dogs.

“There was a carjacking and the suspects weren’t cooperating, they weren’t getting out of the vehicle, so they had to release the dogs, and my God. I was like, ‘Note to self: when the cops tell you to do something, just cooperate.’ Keep the peace, even if you think you’re in the right ’cause when they start throwing their authority around… It was pretty hard to watch.”

Likewise, the moral ambiguity, even moral bankruptcy of some characters on 19-2 is remarkable considering the Montreal police force’s involvement in the show. Though Keeso’s Ben Chartier is a pretty standard, by-the-book white-knight cop, some of the series regulars are corrupt and violent; others are so debased that they’re monstrous. Even Holmes’s Nick Barron is a slightly shady rule-bender, “the Malcolm X” of the show, as he puts it — the guy who gets things done “by any means necessary.”

“It’s realistic,” says Holmes, when asked about the negative depiction of cops on 19-2. “Not all police or police forces have a positive image, and obviously there are officers who misuse their power and get out of control. So you gotta understand that they’re human beings.”

Based on their experiences, Keeso and Holmes say that local cops not only don’t mind the dark side of 19-2, they’re big fans of the show. “We get stopped by police officers in Montreal telling us how much they love the show and how accurate the cases are,” Holmes says. “The best compliment you can get is one from the police themselves, and we’ve gotten so much love from them that it just makes going to work sweeter.”

As for the season to come, the one thing that the actors were able to reveal is that the tone is a little lighter, a welcome shift for real-life friends whose characters spent parts of the first two seasons at odds.

“It’s nice to not have to scowl at each other every time they call ‘Action!’” Keeso says, describing the mood as “looser” and “more fun.” “But, you know, it’s 19-2 so it’s not gonna stay that way for long. It’s gonna go somewhere pretty dark and tragic and disturbing. It’s only a matter of time.”

CONTINUE TO PAGE 2: Alex Rose speaks to the show’s writer/producer Bruce M. Smith and location manager Adrian Knight for a special edition of Made in MTL.