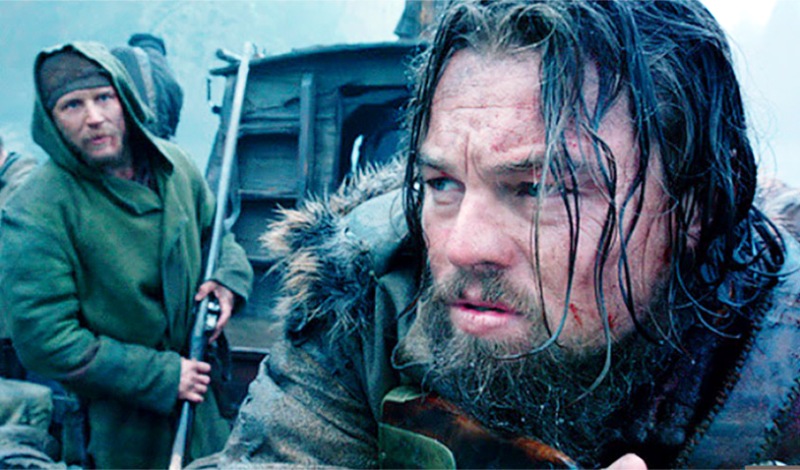 Tom Hardy and Leonardo diCaprio in The Revenant

“The beast in me

Has had to learn to live with pain

And how to shelter from the rain

And in the twinkling of an eye

God help the beast in me”

The Revenant is a new avenue for Iñárritu to explore. It’s an action thriller, which means it is predicated on the very notion that misery must be escalated. In other words, it’s the first time that the director’s propensity for wallowing in it not only serves the material but elevates it.

Hugh Glass (Leonardo DiCaprio) works as a fur trapper alongside his son Hawk (Forrest Goodluck) and a motley crew of scuzzy shitheads under the guidance of Captain Andrew Henry (Domnhall Gleeson). After their party is decimated by a platoon of Sioux warriors looking for the chief’s kidnapped daughter, the men decide to put an end to the trip and cut their losses. On the way back, Glass is out for an early morning hunt when he stumbles across a bear and her cubs. Fearing for her cubs’ safety, the bear mauls Glass within an inch of his life, breaking his foot and essentially ripping out his throat. The men bandage Glass up to the best of their ability but carrying him is too heavy a burden for the entire party. Opportunistic shitheel Fitzgerald (Tom Hardy), young recruit Jim Bridger (Will Poulter) and Hawk are tasked with bringing Glass home for an extra paycheque. Fitzgerald, a two-bit criminal who apparently has little to look forward to in civilization, decides to cut his losses by leaving Glass in a shallow grave and making like the wind. 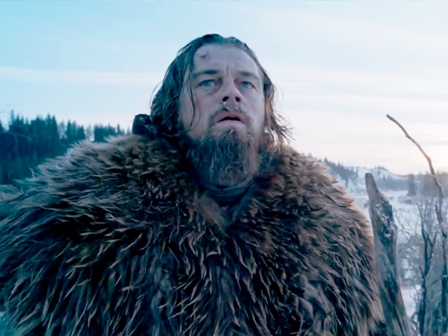 What follows is almost two full hours of a feral, decomposing DiCaprio dragging himself through the snow-capped American wilderness with the single purpose of vengeance on his mind. Covered in mud, blood, phlegm and various other animal particles, his voice reduced to a croak, DiCaprio becomes downright bestial. Cinematographer Emmanuel Lubezki uses only natural light to capture the often-breathtaking northern vistas to create something that looks somewhat like an IMAX nature documentary with a bleeding, wheezing death machine dragging himself through it. Iñárritu’s propensity for wallowing in misery actually works out beautifully when it involves problem-solving, near-drowning experiences and drawn-out hatchet fights.

There are, of course, some of the more unsavoury Iñárritu elements at play here. The film’s score is pretty heavy-handed and rather overused; I’m not sure why three composers were necessary for what amounts to an interchangeable series of sustained tones and a couple of bars of dissonant violins, but they sure are omnipresent. Ditto Iñárritu’s try-hard emotional wringing, which basically takes the form of a series of cheeseball flashbacks that Glass has of sun-dappled happier times with his late wife. This rather pedestrian backstory pales in comparison to the visceral immediacy of the rest of the film. In fact, the film’s outsized intensity and visual beauty seems almost deliberately calibrated to gloss over the fact that the script has, in actuality, about the same amount of depth and character development as your average Taken sequel. The fact is that for all its sweeping vistas and mud-spattered period costumes, this is pretty much just a straightforward action film.

But what an action film. A lot has been written about how difficult The Revenant’s shoot was, as if braving bad weather conditions and eating raw seal liver (or whatever the fuck else) was a direct indication of the film’s quality. Whatever happened behind the scenes of The Revenant, it resulted in a very intense, engrossing film experience, a not-quite-subversion of genre that elevates a basic script into a tour-de-force of intensity. It’s not without its flaws, but I cannot imagine another situation in which Iñárritu’s particular set of overbearing stylistic and storytelling quirks are this perfectly suited for the situation. ■

The Revenant opens in theatres on Friday, Jan. 8. Watch the trailer here: