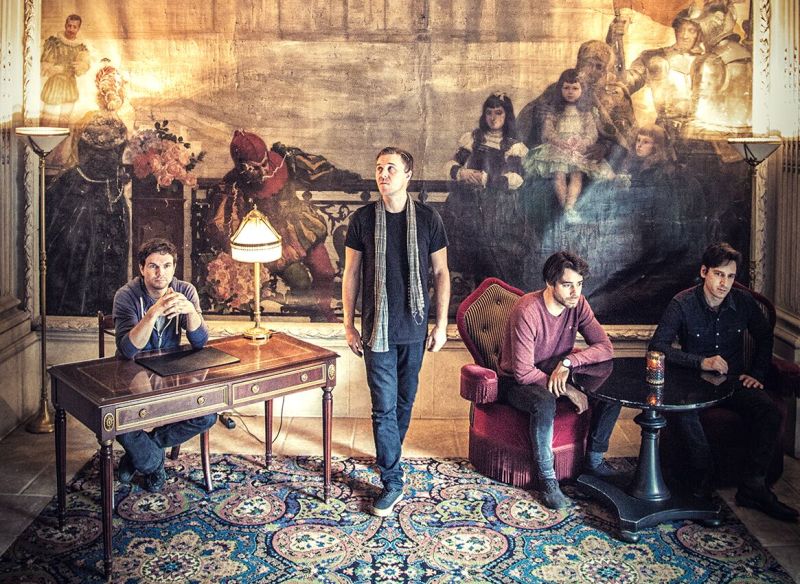 The Franklin Electric is playing the M for Montreal music festival tomorrow night (Wednesday, Nov. 18), fresh from a European tour that ended on a very dark note. We contacted singer Jon Matte about the band’s experience in Paris on Friday, when they got frighteningly close to the shooting at la Belle Équipe restaurant:

Jon Matte: We were coming home from Bristol in the U.K. It was a long day, and we were just pulling into Paris. We were making stupid jokes — we were a bit delusional, like normal bands get when you’re in a van for eight hours — and we turned the corner of a street where a woman was running across the street crying and to our left was a corner café and ambulances and firetrucks and people on the ground getting resuscitated with CPR.

We had no clue, like what the fuck is going on here? Maybe someone is choking on their food or had a heart attack — we obviously assumed the least of it. We were staying two blocks away so the light turned green and we kept going, kind of unsure, and then we got to the Air BnB and within five minutes the news feed started to go and we realized what did we just drive through? Our friends in Paris were like ‘Don’t go out, there’s a shooter on the loose’ and there was all this chaos in the streets, people running around, sirens, helicopters.

We were all scared. It’s kind of this feeling of adrenaline — you’re kinda shaky, you’re really excited, you don’t know how to feel — you want to know how to feel but you can’t. There are certain things that are just beyond your conscious mind, and the effect that they have on you — I still don’t  know to what degree I or the guys have been affected by this.

In the couple of days I’ve had to sit at home and think about things, I started to allow myself to feel more about what went down. You think about the number of terrorist attacks and bombings that happen all over the world that are not necessarily spoken about, which boggles the mind, too.

The fact that it was a music venue that was attacked — that’s a scary line to cross because it’s not a political place it’s not a bank it’s not a religious place. It’s a place where it’s just pure expression and music. Everybody thinks they’re safe and it won’t happen to me — that’s something we’ve been thinking about over the last few days.

People from our booking agency know people who were at that concert. It’s kind of like Montreal. When I see posts [about people who died] from people I know in Paris, it’s [the equivalent] of, you know, the guy who owns Metropolis and the guy who used to do sound at Divan. Everybody’s kind of interconnected in Paris, so it’s affected a lot of people in the music scene.

What follows is a separate interview with the Franklin Electric conducted on July 31, 2015 on the grounds of the Osheaga festival, shortly after the band’ set.

Lisa Sproull: What’s your experience been like in the Montreal music scene, working with promoters, venues, other musicians, technicians — have you had any notably good or bad experiences?

Jon Matte: I’m kind of the guy who’s been a sponge, just soaking up ideas and information on how it works. I was always there. I’m friends with Patrick Watson and the guys from Half Moon Run. Just having conversations with people, seeing their shows, seeing how they do things. We learned how to run a proper sound check, how to do our monitors — everything we’ve learned here will serve us for probably the rest of our lives, from other bands helping us out and technicians and people in the industry giving us tips.

LS: You have a really classic and timeless sound, and a lot of bands that try to do this end up sounding derivative. How do you maintain this classic sound while keeping it new and fresh?

JM: I think it’s based on the honesty of your art. When you try to stay grounded in the honesty of what you’re doing, it’s not about a style or a sound. You kind of do something that you feel at home in, that makes you feel excited and makes you feel like you’re doing something you enjoy doing, and then there’s just the honesty of the lyrics and the sound, and the sentiment side of things, too, keeping it as personal as possible. We’re about to go into the studio, so that’s a good question because that’s what we’re going to try to do when we look at new songs.

Alexis Messier: I think it’s also related to the styles of music we listen to. Jon has his style, I listen to classic stuff like Van Morrison, and mixed together it gives a fresh sound. The modern vibe is brought by William, he’s the kid, he’s like 24, so it’s like a filter that’s applied to old school stuff. We’re in 2015 so I guess we succeed at doing something fresh with an old-school flavour. It’s all a mix of different stuff.

LS: Can you tell me a little bit about what you’re going to get up to in the studio?

JM: Osheaga was a great opportunity for us. We played at 2 in the afternoon, and honestly we just want to thank all the people that came out. Here in Quebec it seems like there’s something very loyal in the music industry, which is maybe closed off to us a little bit at times. But once you’re kind of accepted in the Quebec music scene, you get a lot of loyal fans and they support you — they come to shows, they buy records. For me to see that amount of people there and being into it was amazing and it was super great to be there. ■

The Franklin Electric will perform as part of the M for Montreal music festival with openers Milk & Bone and Elliot Maginot at the Rialto Theatre (5723 Parc) on Wednesday, Nov. 18, 8:30 p.m., $26