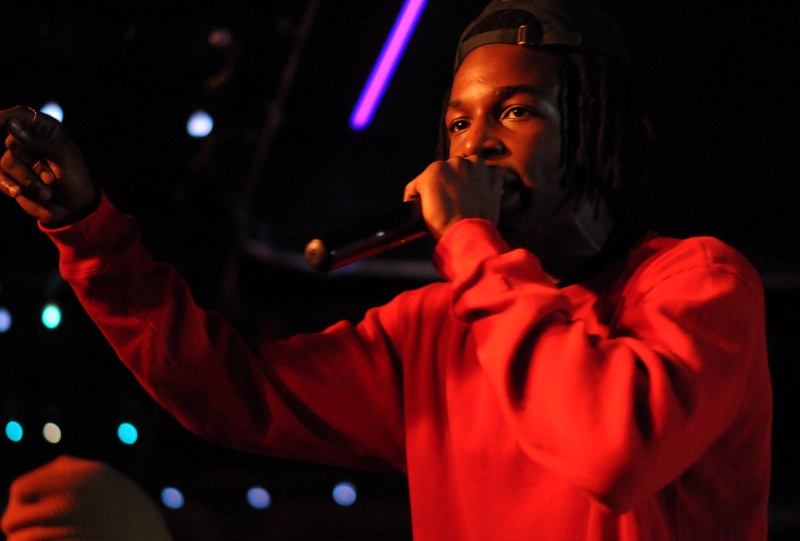 Jazz Cartier. All photos by Cindy Lopez unless otherwise noted

The 10th edition of the M for Montreal festival is a wrap, and the 2015 edition was packed with 514 goodness (with a nice side of bands and performers from out of town, too). Here’s what our music team and ace photographer documented from Nov. 18 through Nov. 21.

Toronto’s Jazz Cartier, touted as Canada’s next big rap export, has gotta be the artist I’ve been asked the most about in 2015. So I was curious to see what he brought to the table live on Thursday at Cafe Cleopatra. And frankly, it turned out to be a light snack. His music is decent, his style is au courant, and his show is energetic, but it all feels a little too calculated. You’re supposed to love this, and many do, and I grant the small crowd ate it up. But it’s the kind of thing I can only see as being interesting once. I missed his opening set, to a much larger crowd, at Metropolis the following night, and I hear it went over, but after all the hype I expected more. And it would have been nice to hear DJ Dopey, one of Canada’s finest on the decks, put to more effective use on stage. One to watch, but hard to say for how long. The hype still needs some living up to. (Darcy MacDonald) 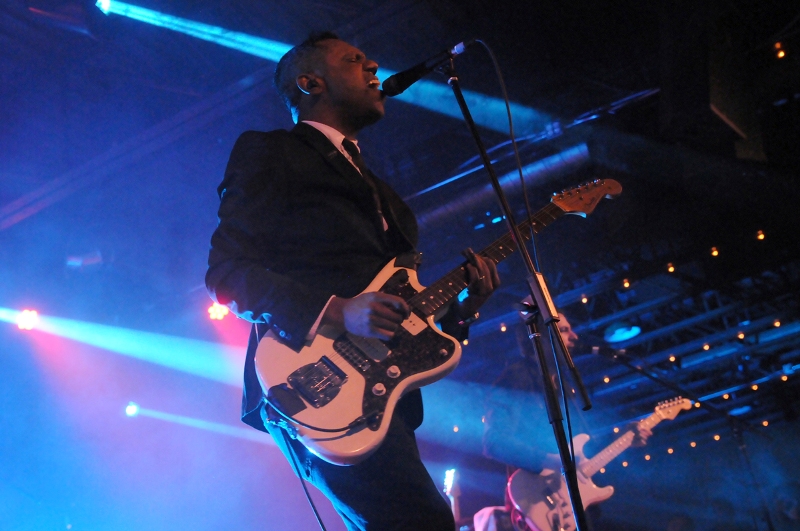 Doris Day’s “Que sera sera” felt like an apt song for Montreal’s orchestral rock OGs to walk out to on Friday night, one week after the Paris attacks, following days of anti-refugee spiel in the old and new media. The drama of the Dears’ lyrics took on global proportions, too, while their songs were delivered with the sonic grandeur that we’ve come to expect from this band. Even minus the showy brass and strings that accompanied them in the past — and in their recent 20th anniversary performance in Montreal — the Dears’ core five-piece played a straight-up high-energy set of career-spanning material, opening with the rock-solid lead tunes from their new record, Times Infinity. Why these guys aren’t playing a venues much larger than the Fairmount is beyond me. (Lorraine Carpenter) 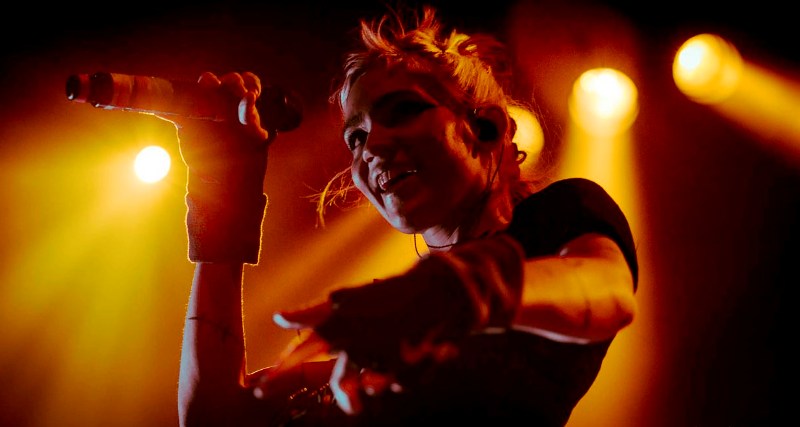 A week ago, Grimes cancelled a couple of shows and played a short set in one city, to give her voice and body a chance to rest after she pushed herself a little too hard—but at Metropolis on Saturday night, you’d never know she was in recovery mode. Despite wearing a stiff boot on her right foot to protect an injury, Grimes tore across the stage in front of a rapturous and adoring audience with hair and skirt flying, illuminated by strobe lights, colourful projections and even lasers emanating from the stage to the back of the room. Alternating between material from 2012’s Visions and the brand-new Art Angels, her set was also peppered with off-album collaborations like “Phone Sex” and last year’s “Go” (both feat. Blood Diamonds). With endearing awkwardness, the self-described shy performer spoke to the audience and crew in between-song interludes, when she gave the hometown crowd back all the love they gave her — offering a shout-out to M for Montreal and her early shows in the city, as well as bringing a group of Arbutus-affiliated scenesters on stage to join her and her pair of back-up dancers for several songs. I’d wondered if we’d see any real instruments on stage given their presence on Art Angels, but in the end she didn’t need them — she was doing just fine on her own. (Lisa Sproull)

It was a busy night for shows in Montreal, I’ll give you that, but the fact that the two producers behind the Fractal Fantasy interactive audiovisual mindfuck couldn’t muster a larger audience of curious onlookers was a huge letdown. Jones provided a viscous alternative to Sophie’s bubbles and gurgles, while Hawke – an erstwhile Montrealer who collaborated with Kanye West, for crying out loud – ramped up Jones’ mutated party trap with blistering synthetic horns. Visuals on par with their fractalfantasy.net homepage would have made for a more immersive experience, but their punishing future sounds proved equally potent in the dark. Montreal wasn’t ready this time around, but hopefully we’ll figure it out soon. (Erik Leijon) 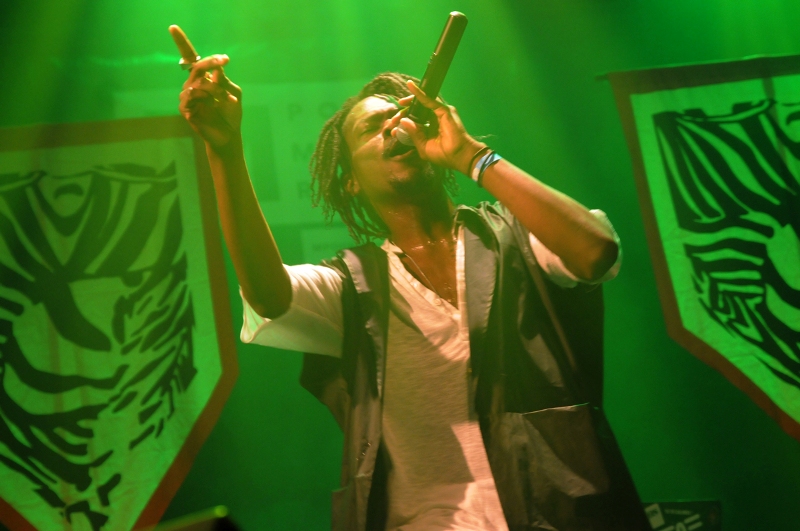 Headlining the all-francophone showcase at Café Campus on Saturday (with a trilingual set), Pierre Kwenders exhibited his eclectic musical palette with panache, on a stage draped in quasi-animal print flags, backed by a DJ, drummer/percussionist and guitarist/keyboardist. Making a showcasey afternoon crowd of less than 100 people actually dance is an accomplishment, but it’s hard to stand still given Kwenders’ pretty accessible Afropop/hip hop sound (with a touch of swampy Louisiana sound on “Mardi Gras”), as heard on his record Le Dernier Empereur Bantou. He led the way with his own moves, keeping a boogie going from his gravity-defying hair down to his Converse. Though his outfit (minus the Converse and flashy hat he wore at the beginning) was very Kanye, Kwenders emanates nothing but humility and good vibez. (LC)

The Montreal duo took to the stage on Friday night joined by an additional three players who collectively recreated the best moments from their recent EP, Only Qualms. The group’s sound is as charmingly quirky as ever, and they fill a void in the local scene for hooky, weird pop in the tradition of say, the Unicorns in the previous decade. In the intimate setting of Bar le Ritz, their energy and performance was dialed in to precisely the right degree. The crowd enthusiastically received them, and they surely won over some new fans with set highlights like “Clouds” and the infectious closer, “Miracle.” (Mike Sallot) 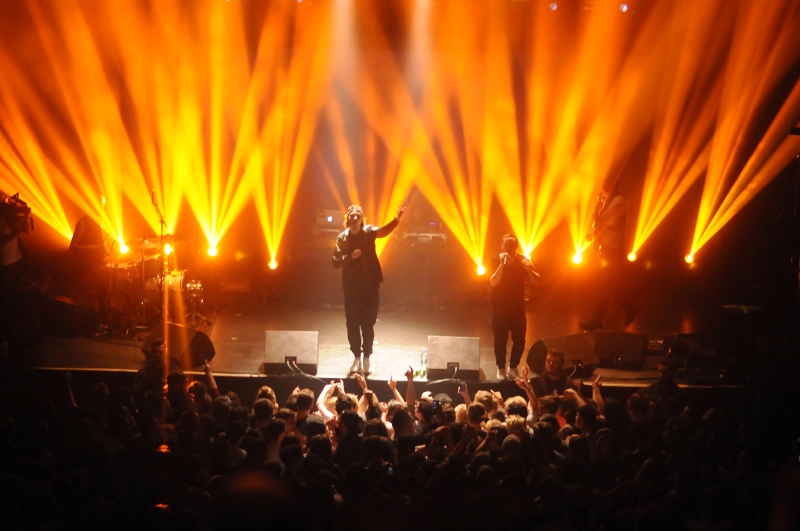 I’m pretty sure the last time a Quebec hip hop group headlined the Metropolis would have been Dubmatique, or at least during their era. In more recent years, Alaclair Ensemble have held the venerable ol’ music hall down for Nuit Blanche. A headlining Metropolis show is a rite of passage for a local band on the rise, and Loud Lary Ajust made the moment theirs on the strength of their music, their set energy, and above the palpable adoration from the wall-to-wall die hard fans that packed Metropolis to the rafters, the takeaway feeling being next, they do it twice. Un triomphe. (DM)

With their laser-like intensity focused on an impressive array of on-stage gear, Montreal synth-lords le Matos blazed through a set that drew heavily on new material from their forthcoming album and their soundtrack to the retro-futurist action flick and Fantasia festival hit, Turbo Kid. Sonically, the show progressed like the plot to the best ’80s teen adventure film, with dark and suspenseful moments followed by shimmering highs, best exemplified by set-closer “Tequilla Sunrise.” In a similar way to those cinematic moments when the heroes face grave danger and finally triumph over the forces of evil, you couldn’t help but root for le Matos as they unleashed their energy on the swelling Newspeak dancefloor. (MS)

After an appearance at Osheaga this past summer that didn’t quite hit its mark, the stakes were high for the Glaswegian beat-maker’s return to Montreal. This time around, he went straight for the jugular with a DJ set that effortlessly moved between tempos and included a fair number of highlights from his own production career (the thundering horn samples in an amped-up version of “Higher Ground,” which he co-produced with Montreal’s Lunice as TNGHT, felt like it could have cracked open a chasm in the concrete dancefloor of the SAT). Happily feeding off the energy of the crowd, HudMo closed with the triumphant “Scud Books,” a highlight from his sophomore LP, Lantern. (MS) 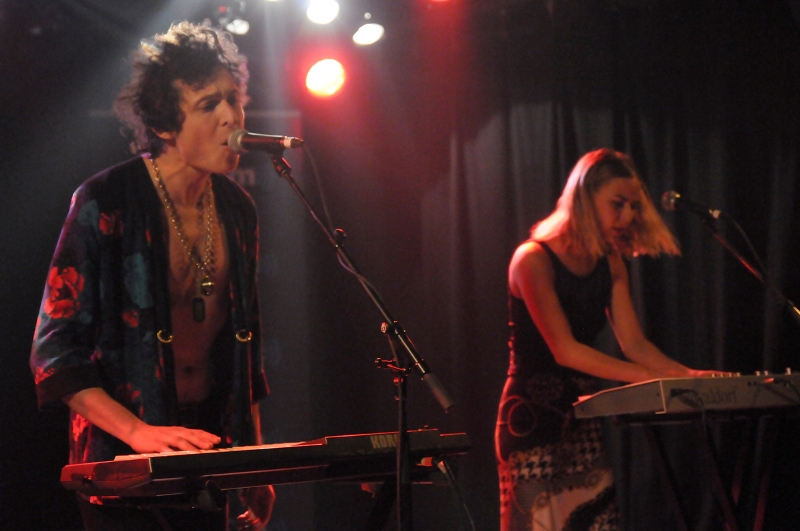 Electro-pop trio Paupière isn’t high-energy dance music, but given the timing of their set (Saturday afternoon) and the crowd (mostly hungover media and delegates), that was a very good thing. These local gals and guy, signed to the Lisbon Lux record label, produce a sound that’s alternately chilly and sweaty, breezy and smoky, bridging the familiar synthscape of the ’80s and the hybridized songcraft of whatever-we’re-calling-this-decade — the teens? Having just released their first single, Paupière in their nascent stage sounds pretty tight. Let’s see where they go from here. #Paupieremania (LC) 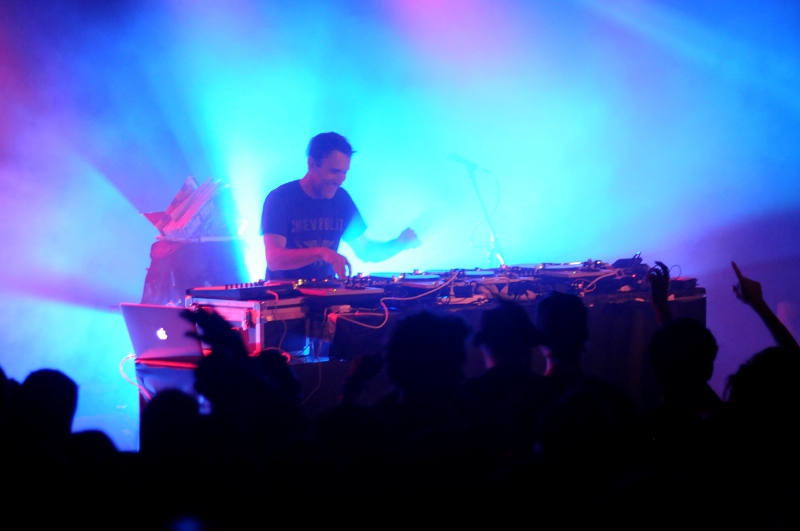 This was my gem of the fest, the moment I’d been waiting for, and a revisitation to my formative years as a hip hop journo. The once-Def-Jukie, a student-become-master of the DJ Shadow school of turntable academics, has long had the freedom to experiment with his craft; he’s a pioneer both of the video backdrop and the DJ-leads-live-band takes on making a guy on record players exciting to watch. But it was a pleasant surprise to find RJ in a return to absolute basics, at least for him. Four turntables, a couple of drum pads, and his two hands on the non-stop cut-and-loop. Oh, and a crate. Of real vinyl, the pop-and-hiss of which suggested his actual, sample-source vinyl collection, which he teased, rubbed and built to the anticipated climax of his most cherished Deadringer-era compositions. The Fairmount Theatre packed wall-to-wall with floor stomping disciples of his funk, suggesting the logic of a return visit sooner than later. RJD2 shows off exactly how it isn’t done anymore, a bittersweet symphony of dopeness. Thanks for that, M, Neon and SJU. (DM)

The highly anticipated sequel by James Gunn will screen at the Imperial Cinema.