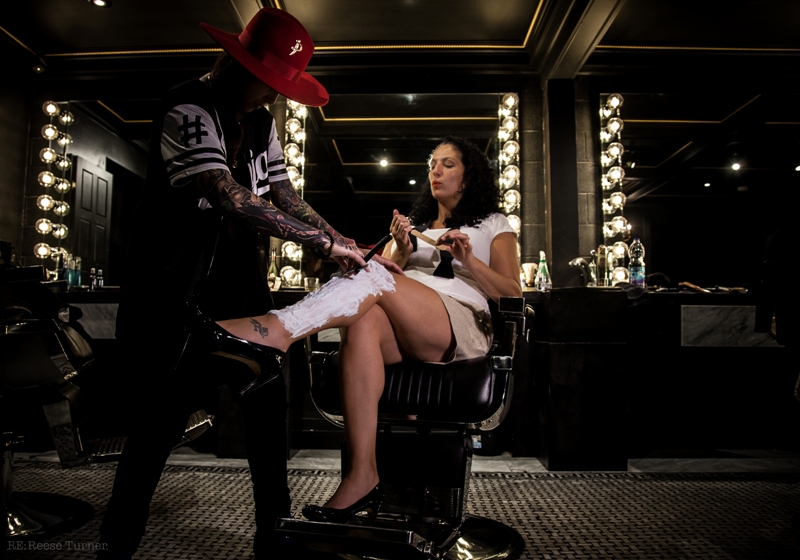 Montreal comic Eman El-Husseini is about to fly south and settle in New York City, bringing her politically and socially conscious “Emantertainment” with her. To help the second chapter of her career along, she’s taping a live performance at Club Soda this week, one that will serve as a resumé and calling card. Ahead of this big show — hosted by Mike Ward and featuring fellow Montreal comic Jess Saloman (who’s also married to El-Husseini, so this is a farewell show for her, too — I spoke to Eman about the comedy scene and the evolving political scene in Canada and the U.S.

Lorraine Carpenter: So why are you moving to the States?
Eman El-Husseini: I feel like I’ve hit a ceiling in Canada now, like I’ve done everything I could do. There’s just more opportunity in the States.

LC: Apart from the saturation of comedians and comedy clubs, how is the New York scene different? Is there more political and topical comedy there?
EE: The only major difference is that comics have to focus on topics that haven’t necessarily been touched upon, and if you talk about current events you have to approach it in an out-of-the-box way. New Yorkers are so used to stand-up comedy that anything that’s at all hacky, or if they see the punchline coming from a mile away, it’s not gonna work. In Canada I feel like we can still get away with that to some extent but it’s certainly not the case in New York, which is so wonderful for a comedian who’s trying to really hone their craft and challenge themselves to write with a unique voice.

LC: Have you ever encountered social media outrage about your material?
EE: I haven’t. I feel the need to entertain first and it’s actually really important to me to not be offensive. I still want people to reflect about topics that I touch upon, like religion, interracial marriage or the Israeli/Palestinian conflict, but I find that making audiences laugh is a more effective approach to getting people thinking than being preachy or trying to shove something down their throat. That’s why I got into comedy to begin with.

LC: Would your joke about Sept. 11 not go over well in New York, or are audiences there sophisticated enough to be chill about it?
EE: Yeah I think they are. I never got a negative response to that joke until once when I did it on the Strombolopoulos show. Some people just hear “Sept. 11” or they hear “rape” and they automatically shut down and they’re like, “No! I’m offended and I don’t want to listen to her making light of the situation.” But of course I’m not. I’m talking about the misfortune of having my parents’ wedding anniversary fall on that date.

LC: Do you think Canada will be a funnier or less funny place with a new Prime Minister?
EE: Ha! Well Stephen Harper wasn’t funny at all. I was really scared as a Muslim Canadian that it was like I wasn’t Canadian enough for him. Every time Stephen Harper came up in conversation with other comedians, it was about how upset we were about his government and his views. But he wasn’t that funny as a person either, whereas George W. Bush and now Donald Trump, it’s like a gift from God how hilarious these guys are.

LC: You must’ve contemplated the possibility that you’d be living in the States with Trump as President.
EE: Yeah, I’m kind of terrified of that. Every time we visit the States, people ask us what we would do, although I sort of have the practice of living in Canada with Stephen Harper for 10 years to put up with Donald Trump’s racism. The scariest part of this whole thing it’s not that far-fetched that Americans would vote this guy in.

LC: Hopefully a Democrat wins but I guess the downside is that they’re not as funny. At least Hillary isn’t.
EE: Oh not at all. I caught her on Jimmy Fallon and she was trying so hard but it just doesn’t suit her. I’ve always preferred her as a kind of tough, no-BS type of person. It seems unnatural for her to try and be funny. I actually have the same criticism of Tom Mulcair trying to be likeable and upbeat when we like his fiery attitude and how angry he is.

But speaking of political correctness, what’s with people going on about how we’re sexualizing Justin Trudeau? This hypersensitivity really freaks me out — it’s too much. I mean I don’t think good looks got him elected at all. He genuinely seems like a good guy who’s full of progressive ideas, something that we’ve been deprived of for the past nine years. But why not enjoy his good looks? It’s a bonus.

LC: So tell me how you chose the other comedians on the bill at this show.
EE: Well I had to choose my wife [Jess Saloman], obviously. Just kidding! I think they’re both fantastic comics. Mike Ward is really hilarious and he’s always been so lovely and generous with his time. I got to catch the Sunday taping of The Nasty Show at Just for Laughs this summer and it was such a standout performance.
We’re all really different from each other so it won’t be repetitive for the audience even if we touch on some of the same topics. We have different perspectives and delivery.

LC: So what are you going to miss most about Montreal?
EE: Oh my God, the food. We forget how lucky we really are. New York is okay but in Montreal, even if you go to an average restaurant you’ll get the best average meal there is. ■