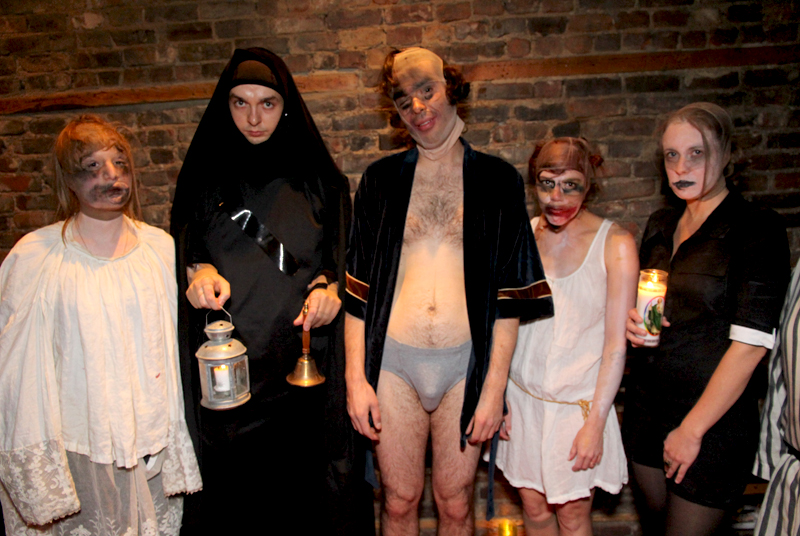 Part of the cast of SIN. Photo by Lisa Sproull.

The last time I went through a Halloween haunted house, it was pretty low-rent—imagine plastic props and cartoony vampires painted on dark walls, while a warbly tape-recording played tinny screams. It wouldn’t take much for Théâtre Ste-Catherine’s version (dubbed SIN—which opened Wednesday night and runs through Saturday) to top that—I was expecting to be impressed, but what surprised me was that I even found myself to actually be scared.

I felt disorientated immediately upon entering the normally familiar theatre when, instead of being greeted with the friendly smiles of the crew of comedians and actors who I’m used to seeing there, I was welcomed inside by a strange collection of ghoulish figures with sombre expressions and the slow, creaky movements of long-dead ghosts just risen from the crypt. “Who are you?” I asked of a particularly stony-faced host—someone, as it turned out, that I’ve met literally dozens of times before. From that point on I abandoned all hope of holding on to the comforts of the outside, non-haunted world as I gulped down a fortifying swig of beer and went headfirst into the unknown, bracing myself for the terrors ahead. 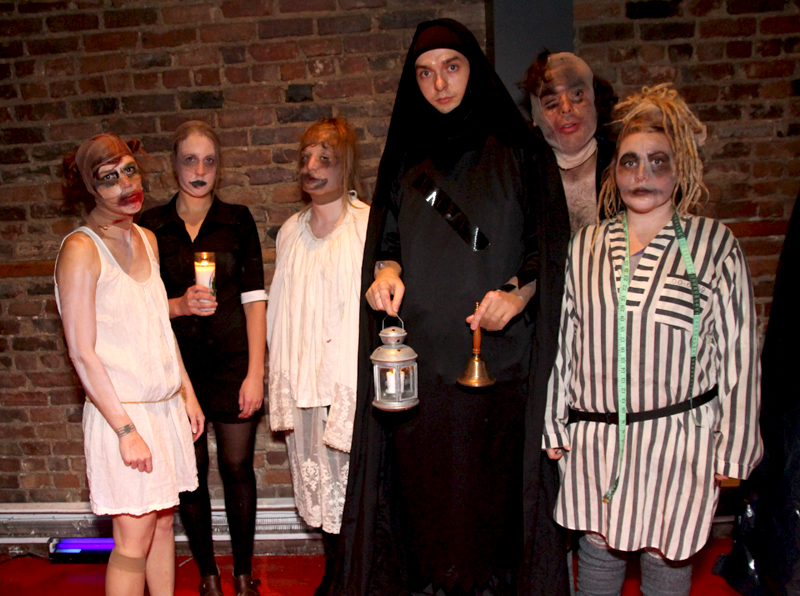 Part of the cast of SIN. Photo by Lisa Sproull.

For the haunted house experience, the seventh of its kind produced by Rolo Zuniga and Sandi Armstrong of Neighbours Productions, Théâtre Ste-Catherine has been transformed into a maze of small rooms created with temporary partitions. Every inch of space is used, from the ground floor to the rooftop. The tour begins with a spooky figure clad in black, hooded robes leading small groups of 5–10 with a candle-lit lantern through an alleyway to the back of the theatre. A soundtrack of creepy sounds sets the tone, but is no match for the sound of the real heavy rain outside or the frightening screams and moans coming from within the haunted rooms. Most impressively, an apparition in a long gown appears with an operatic voice, whose mournful but beautiful song provides a comforting balance to the tortured cries of her less fortunate comrades.

Moving from room to room is akin to visiting each of the nine circles of Danté’s Inferno of hell—where special punishments await those whose lives were marked by engaging in any one of the seven deadly sins, namely pride, greed, lust, envy, gluttony, wrath and sloth. Tortured souls are stripped away of any worldly comforts and tormented by demons who tease them, and us, with reminders of the earthly passions which became their downfalls. A bewitching Eve lustily gobbles an apple in front of a tempted Adam. A decayed ghoul admires his reflection in the mirror, only to have it come alive and attack him. Much of the experience defies description and must be seen in person with its shock value intact—and when you go, you’ll see why the event’s 18+ restriction is well earned.

Halloween is a time where we say we have fun being scared—but is there anything really scary about seeing another sexy pizza rat or something at the bar, as much fun as that might be? If you’re looking for a Halloween experience that is really and truly creepy and unsettling (and okay, still kind of sexy actually), you’ll find much to satisfy your sinful cravings at Neighbour Production’s SIN haunted house. ■

6 new deaths have been reported.