In festival jargon, they call it a roundtable. What we’re faced with now is more of a long couch. Room 540 is ostensibly a hotel room, though all it realistically fits is one low, long couch upon which all eight members of the press are sitting. Propped up across from us are two high director’s chairs for the interviewees to sit on. Brie Larson, however, isn’t too hot on the idea. “Am I just supposed to sit on this high chair?” she says. “That’s so weird! I’m not doing that!”

And so, Brie Larson — one of the most talented actresses of her generation and an almost certain shoo-in for an Oscar nom this year — sits cross-legged at a coffee table.

Larson was at TIFF to rep Room, the Lenny Abrahamson-directed adaptation of Emma Donoghue’s novel of the same name. Larson plays Ma, a young woman whose entire life is contained within the walls of a fortified shed. She cannot leave Room; she does not decide what she does. Ma has lived in Room for seven years, ever since she helped a neighbourhood creep named Old Nick find his dog. Old Nick brings her food and supplies; he also uses the visits to sexually assault her.

Out of one of these encounters, Ma’s son Jack (Jacob Tremblay) is born. As a small child, it was easier for Ma to explain away the limitations of Room, but as Jack turns five, his mind develops beyond the rigidity and fantasy that Ma originally used to justify their life in such an enclosed space. Seeing an opportunity to escape Room by using Jack, Ma decides to make a break for it and therefore upset the balance of terror she’s lived in for seven years.

For Larson, getting into the character’s skin was exacerbated by the conditions of shooting. “While we were shooting the movie — we shot it mostly in chronological order — everyone on the crew was thinking ‘Once we get to the escape part, it’s going to be so much easier,’ which, of course, it wasn’t. It was freezing, we were shooting in different locations, it was a lot more work than when you’re just on a soundstage every day.” 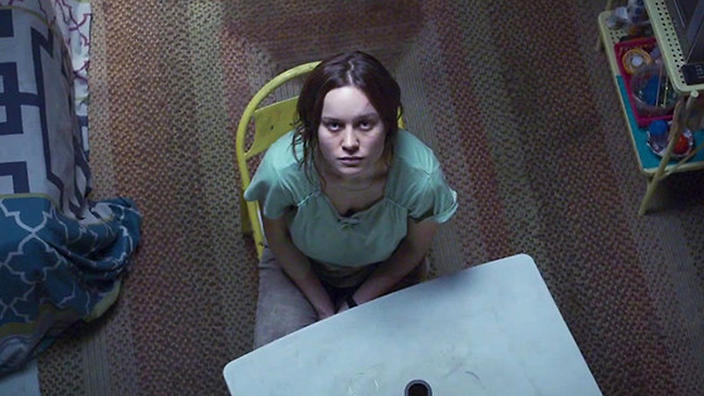 “The brain does an incredible thing because it wants to survive where it just shuts off a point of awareness,” she continues.

“It’s what we do all the time. We shut off this awareness of all the terror and the war in the world so we can have this lovely conversation right now. We do it all the time and she’s doing that in Room. She’s not dealing with what’s happening. You start to see her get this sort of manic feeling that they have to get out and knowing that she has to get out, but it’s not until she’s in a safe space and back at home that things start to come to the surface. That was actually much harder for me because she’s dealing with trauma, she’s dealing with panic attacks, she’s dealing with the amount of physical abuse she’s had over the years.”

Room hinges almost entirely on the relationship between Ma and Jack. Consequently, most of Larson’s scenes were only shared with young Jacob Tremblay. “I’ve never worked closer with any actor than I have with him. There’s no other movie I’ve done where I’ve had more scenes or spent more time with any one person. I can’t think of a better person to be on that journey with — he’s so much fun. We really got along very, very well.

“But he is… yes, he’s eight years old, but he’s not someone that we had to trick into this performance. When Lenny and I first met and discussed this project before Jake was cast, we had discussed that if the film was riding on this kid’s performance, perhaps we’d have to work together as a team to create situations in order to trick him into a performance. Instead, we found a kid who’s a legitimate actor — my performance exists due to him. So much of my performance was playing off of him and feeling a deep love and care for him. That’s what the movie’s rooted in. I can’t believe I’m saying it because I never thought I’d be working with a fine actor at eight years old, but I did. I really did!”

Working on Room also brought out Larson’s nascent desire to direct (she has already directed two short films), both from being on such a constrictive set and from spending so much time shaping her and Tremblay’s performance. “The one difference with working with an eight-year-old as opposed to an adult is their capacity to take multiple notes at once. I’m used to the director coming up and saying ‘Can you do it more like this? Can you do a little bit of this?’ Camera will say, ‘Hey, also be aware that your light’s right there so don’t get in his shadow.’ Wardrobe will come over and say, ‘Hey, can you be aware not to let this shirt fall to the side because that won’t match for continuity?’ And then hair might come and say ‘Actually, the ponytail fell to this side, so can you do it like that?’ You have to negotiate and all sort of digest into your brain and act like it’s all natural.”

“For an eight-year-old, that’s just way too much information and way too complicated. Things like continuity, which he called cotton-nuity, just don’t make sense to him. Instead of doing take 1, take 2, we’d just let the camera roll and I would stare into his eyes — a lot of eye contact between us in those four months — and I could sort of help him get there. I would have to sort of fix his hair because he’d mess up the wig, and make sure the cotton-nuity was right. When it’s just the two of us talking, we can sort of get him into that zone and get him to relax. We’d do some things that kids do like make a funny face or sit still for a second. It was just about creating this sort of focus between the two of us.”

“The tricky part on my end was that, of course, I’m doing my own emotional scenes because we’d shoot two sides,” she continues. “I’d have to learn how to basically hold a tear, hold emotion until he was ready to get to where he was going. It became this sort of dance between the two of us that really only I could do because it gets chaotic when too many people get into it. We’d just need everyone to chill — I talked with Lenny and I knew where the scene would go and I would help him understand. ”

“A few years ago at SXSW, I premiered a short that I had written and directed. I felt like that whole experience at SXSW was a moment that was really pivotal for me. I really felt like me. I felt like I did some really interesting, different characters in different movies and I was also there with a short that I wrote and directed that I was really super proud. Because of all that awesome stuff that happened at SXSW, I’m, like, an actor now,” she laughs. “I was sort of half an actor before, I wanted to be an actor but now I am an actor. I am writing, it’s something that I want to do and will start to transition into that, but right now I’m still getting my sea legs as far as being An Actor.” ■