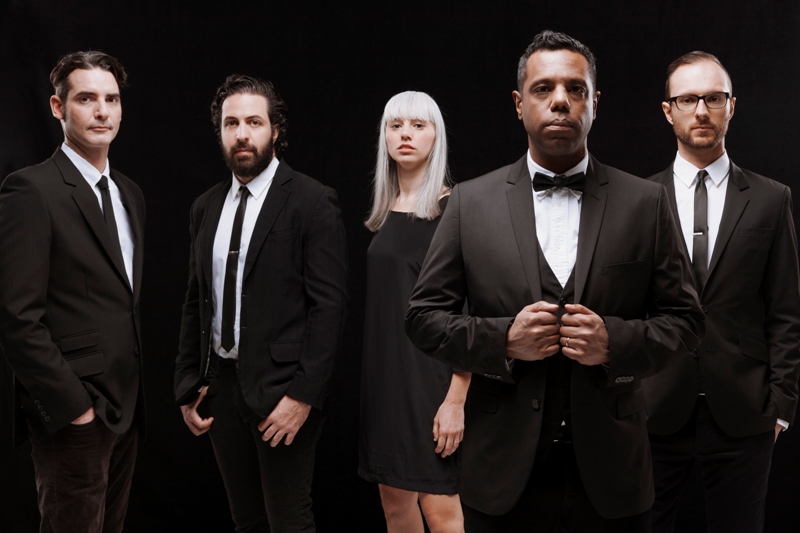 Sometime after the launching and touring of solo albums by singer Murray Lightburn and guitarist Patrick Krief in 2013, the Montreal band regrouped to make a record. They emerged from rehearsal spaces and studios in Montreal and Toronto with Times Infinity, to be released in two volumes.

Listening to Vol. 1, the first thing that will strike anyone familiar with the Dears catalogue (which you really should be by now) is that they’re fusing light guitar work and fresh rhythms and grooves with a distilled Dears sound — the steep riffs and funereal keyboards, the baroque ornamentation, the bursts of rock energy and the life-or-death ballads that leave traces of Gauloise smoke in their wake.

“That sort of self-referential thing was a theme that kept coming up,” explains keyboardist/singer Natalia Yanchak. “We obviously don’t wanna repeat ourselves but there were often times when we’d be, like, ‘We should do this — it’s kind of like what we did in that song.’ Having so many albums under our belt [five LPs, two EPs and a compilation of early material], it’s like we have our own canon that we can refer to.”

The band also treads some familiar territory thematically, wallowing in the darkness of the modern world and reeling at the thought of what the future will look like. A Dears album would not feel complete without allusions to the apocalypse, literal and figurative — here, “We Lost Everything” and “Here’s to the Death of All Romance” shouldn’t be seen as a reflection of personal tragedy (Lightburn and Yanchak, who are a married couple and parents to a pair of kids, are relatively happy and healthy) but of existential despair, which, if you’re paying attention to the outside world, seems fair enough.

The photo on the cover of Times Infinity Vol. 1 shows Lightburn and Yanchak embracing; it reminded me of something Yanchak once said about how the couple got through a tumultuous time for the band, nearly a decade ago, by holding onto each other like Kate Bush and Peter Gabriel in the music video for “Don’t Give Up.” I had to ask if there was any drama behind this image, the kind of image that feeds the notion that the band feels like the perennial undergog, like it’s “the Dears against the world.”

“Looking back,” Lightburn says, “I think that ‘Dears-against-the-world’ thing is a misconception and maybe just more of a …reflection of how the press loves to frame the band. This woeful, downtrodden band. And that is probably because the lead singer is an ‘angry black man.’ We’re generally a misanthropic bunch — aren’t we all? — but we’re not really ‘against’ anyone.

“To me, a band is like a family and families seem to have a sort of collective view of the world mostly due to being cooped up together for years. The words I write are filtered through my experiences and now my own family is a big part of that. The album cover photo is just a genuine moment that Howard caught secretly on his phone from behind the mixing desk. Natalia and I were holding each other in the control room listening to her final take of ‘Onward and Downward.’ We cropped off the heads to give it a more anonymous feel. But it perfectly captured everything that these albums are about: literally holding on to the one that means everything you for as long as ‘forever’ is.  It’s very very romantique.”

With its 10 tracks clocking in at 39 minutes, Times Infinity Vol. 1 is the leanest Dears record ever, but the band could have easily decided to go the opposite route and make it an epic. Even when sides haven’t been a practical consideration (as it is with vinyl and cassettes), the band has often broken their albums up into Side A and Side B (with a “symphonic pause,” Yanchak says), but apparently this two-part release was not foreseen when Times Infinity was conceived.

“We just had 20 songs and we recorded all of them,” Yanchak explains. “We definitely still make albums, but if there’s any way that we succumb to the pressures of modern life, it’s that we feel it’s a mistake to put out a very long album. It would have been an arduous, exhausting listen to get 75 minutes of music, or however much can fit onto a CD, into one release. No one has the bandwidth for that. But it was really important to us that Volume Two not be just a bunch of B-sides and throwaway, half-finished ideas. Volume Two is a full, standalone record that can exist on its own or can be complemented by Volume One.”

The album’s bed tracks were recorded at Toronto’s Revolution Recordings, engineered by Dave Schiffman, though the bulk of recording happened at Montreal’s Hotel2Tango with Howard Bilerman as well as Godspeed You! Black Emperor’s Efrim Menuck and Thierry Amar. Alongside a string quartet, members of Stars and Liam O’Neil (formerly of the Stills) stepped in to play horns. As usual, the Dears’ studio experience involved some experimentation, improvisation and drama.

“We played everything — some could call that experimental these days,” Lightburn says. “But the really marked weird thing that happened was that one morning I found that my Q chord was completely fried; a bit devastating as we’ve been using it since Gang of Losers [2006]. RIP. Then I realized that it’s 2015, that there’s probably an app for that. I found something that worked and if you listen on “Hell Hath Frozen in Your Eyes,” there’s a bit of ‘omnichord’ there. Believe it it not, that took dozens of takes to get right with my sausage fingers swiping this tiny screen while Krief was face-palming behind the desk hitting record/stop over and over again at 2 a.m.”

This week the Dears are playing a very special show at the Phi Centre, one that will mark their 20th anniversary as well as the launch of the new record. They’ll be joined by a number of guest musicians to recreate moments from Times Infinity, and from their greatest hits.

In the lead-up to this record’s release, some of the language included in press releases hinted that this might be the band’s last record. But surely the Dears story isn’t over.

“That’s just fatalism,” Yanchak says, referring to Lightburn’s tendency to wonder aloud whether there will be another record (before echoing it). “After Volume Two, who knows? That’s just the uncertainty of life.”

When I asked about the absence of Rob Benvie on this record — he’s the one band member from the Dears’ last record, Degeneration Street [2011], who didn’t play on this one — Yanchak says that he’s still playing music (while focusing on his fiction writing) because “he’s sort of plagued by being a musician.” The same is true of the rest of the band, and Yanchak and Lightburn — on their own or in league with Krief, Roberto Arquilla and Jeff Luciani — will almost certainly continue making music until the end of the(ir) world, whether or not it’s called the Dears, I suggested.

“You know, to our detriment,” Yanchak replies, “it probably always will be called the Dears.” ■