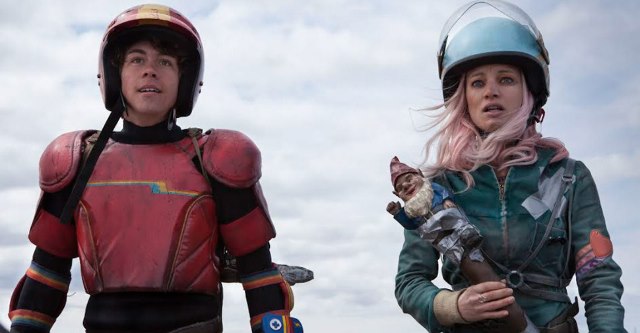 Since its international premiere at Sundance, anticipation for Turbo Kid has been simmering, reaching a critical boiling point during the film’s homecoming at the Fantasia Festival. The Canadian premiere of the made-in-Montreal movie sold out within an hour or so of tickets going on sale, and turned out to be one of the most delightful film at Fantasia this year.

In a parallel world where the apocalypse happened in 1997, the Kid (Munro Chambers) survives by scavenging for trade and taking few breaks for moments of youthful indulgence in comic books and other trinkets he has collected. His routine is interrupted when he meets Apple (Laurence LeBoeuf), who sticks to him like bubblegum. The Kid must find the courage to fight for friendship and his life when he has to face off against water tyrant Zeus (Michael Ironside) and his unhinged sidekick Skeleton (Edwin Wright).

I had the pleasure of speaking with RKSS, the Montreal filmmaking collective behind the movie — namely François Simard and siblings Anouk and Yoann-Karl Whissell — on the day after Turbo Kid’s premiere at Fantasia. Despite the previous night’s late and rowdy festivities, the three longtime collaborators sat before me (more awake than I) answering my questions and finishing each other’s sentences.

RKSS’s origin story begins with Anouk and Simard meeting while studying animation — the traditional illustrated kind. Soon after, the trio began making short films for fun, including their first project Deux morts, a 45-minute short in which two people attempt to murder each other in a kitchen. They look back at this project with laughter, having learned the hard way not to use tomato juice as a substitute for blood. Simard pointedly remarks that this really stings your eyes and “just sucks.”

When they submitted Deux morts to SPASM, the festival asked for the name of their production company, prompting a night of brainstorming. The trio came up with Roadkill Superstar. “We thought it was funny at the time,” Simard explains. “It’s like our death metal band name.” Over time, they’ve opted to go by what they consider the cleaner moniker: RKSS.

When it comes to working as a collective, Yoann-Karl pinpoints this as the source of their directorial strength. “We can rely on each other,” he says. “We have each other’s backs and it’s more fun. When it is stressful, you have your best friends with you, being stressed out with you [laughs]. It’s always great to have support. I don’t think we want to work any other way.” Anouk adds: “And, creatively, it’s cool because we have three brains together, working and finding ideas in three different spaces. It gives place to maybe some more twisted or weird ideas [laughs].”

“We always worked like that,” Simard continues. “The first movie was just a movie done with friends, just for fun, and we want to keep that spirit and so far…”

“It seems to be working,” adds Yoann-Karl. 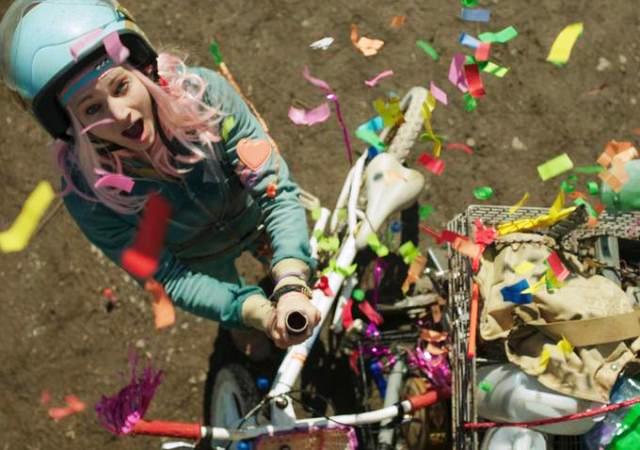 Turbo Kid was born out of their participation in The ABCs of Death, for which they made the short T Is for Turbo. The short was created as part of a contest that would result in the winning short being in the omnibus film. Although they didn’t make it into the final version of the film, Ant Timpson, the producer of The ABCs of Death, wrote to RKSS to ask if they would be interested in expanding the short into a feature.

“We had a cool concept,” says Simard. “Like Mad Max, but with BMXs.”

“But that’s not enough to make a feature,” adds Yoann-Karl, describing T Is for Turbo as “a fight scene with a bit of a story.” “We tried to write a love story, and I think we succeeded. We wanted a story with a heart, something that would be reminiscent of all of the coming-of-age movies from the ’80s. We are really big fans of The Neverending Story and The Goonies and all those films, so we wanted something that felt like that — in a post-apocalyptic world and full of death and gore.”

Turbo Kid has a distinctive use of gore, with generous litres of gushing crimson appearing on-screen. Even the less gore-inclined audience member will take pleasure in the extravagant splashes in the film.

“This was always our signature,” explains Yoann-Karl, “Our gore is never out there to shock. We aim to please and to entertain — it’s Bugs Bunny for adults. It’s Wile E. Coyote running over the Road Runner, but you actually see the guts.”

In terms of other aesthetic influences, Simard says, “we’re huge fans of Peter Jackson, the early movies that he did. I think that Braindead (also known as Dead Alive) was the reason I wanted to become a filmmaker.”

Everything is enlivened by the terrific soundtrack by electro synth artists le Matos, whose ‘“Rise of Turbo Kid” is on constant replay on my iTunes. RKSS have worked with le Matos on past projects and a member of the band, Jean-Phillipe Bernier, was also the film’s director of photography.

Along with presenting Turbo Kid to their home audience and celebrating at a special afterparty with  le Matos till morning light the day before our interview, RKSS was also busy pitching new projects at the industry portion of Fantasia, Frontiers.

“Three years ago, we pitched Turbo Kid at the market. Almost to the day, three years later, we’re showing the film here, which is fantastic!” Yoann-Karl explains.

“We’re pitching a new project this year called Elora’s Death Wish, with the same producer, Anne-Marie Gélinas, and her partner Benoit Beaulieu from EMAfilms, with whom we worked on Turbo Kid.

“The Zombies That Ate The World is a dark comedy, full of gore,” adds Simard. Then, with a smile on his face, he says: “Hopefully, we can start thinking about a sequel to Turbo Kid soon!” ■