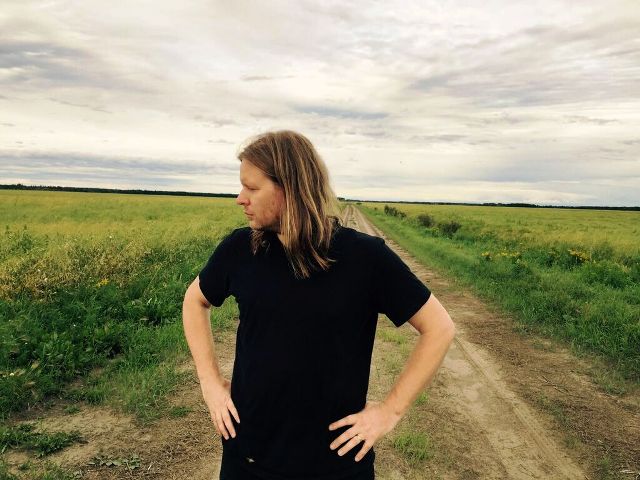 Following the trend set by Sarah Neufeld in 2013, Tim Kingsbury is the latest member of Arcade Fire to produce a solo project. It’s called Sam Patch — after a 19th century American daredevil who jumped into Niagara Falls — and while Kingsbury played an informal set of Sam Patch songs on his own at the River Fest in Elora, Ontario just over a week ago,  the project will be making its official live debut at the Passovah Summer Fest this week. The line-up will feature Arcade Fire drummer Jeremy Gara (who also plays with Neufeld these days) and singer/pianist Basia Bulat, who has worked closely with Kingbury on her albums, notably last year’s Polaris Prize short-listed record Tall Tall Shadow.

Lorraine Carpenter: So how did this project take shape?
Tim Kingsbury: Every time we go on tour, I end up writing a lot of songs in my hotel room or wherever, whenever I’m not playing shows, and this time I ended up with an arsenal of songs. When we finished touring, I started recording them and for the last year I’ve just been writing and recording a bunch of ideas.

I’ve been playing with Jeremy a little, trying to take the songs a bit further, and Basia. I put this band together for this show, which is sort of an experiment, just to put it out there a bit and see how it feels. It’s part of the process of writing the record.

LC: I understand you played a solo set at River Fest in Elora the other day.
TK: Yeah, it was sort of last minute. Basically an old friend of mine has this band, Safe As Milk — they were maybe the first band that I ever saw play when I was 10 or 11 or something; he’s a super old family friend. He asked if I’d come and play a couple of songs with them, so I went down to that, and the promoter of the festival asked if I would play on my own, so I ended up doing a small set of Sam Patch songs on a side stage. That was the first time I played them in front of people.

LC: How did that go?
TK: It was kind of interesting, actually. A lot of the songs weren’t written specifically for acoustic guitar, so I decided to try them out that way just to see how they hold up as songs on their own, and it was a good experiment. I think it went well — people weren’t walking away!

LC: What is your instrumentation for this material? How would you describe the style?
TK: It’s evolved a bit, but the feel of it is definitely rock music — I guess weird rock music. This doesn’t sound very rock ‘n’ roll but I started using a nylon-string guitar and this old Vox keyboard and a Moog synthesizer and I was using an arpeggiator with it, and a little drum machine as well. I was playing around between those things and composing ideas, often based on an arpeggio.

I’m used to playing with a big band and having lots of people around and everyone feeding off of everyone’s ideas, but this way I was setting up parts myself and expanding on that.

LC: Where have you been recording?
TK: I have a set-up at my place, I’ve been doing a lot of it there. I also did some sessions with John McEntire [a well-known producer and member of Tortoise and the Sea and Cake] in Chicago and then I did some of it at Arcade Fire studio in Montreal, too. It’s mostly self-produced and engineered — up to this point, it’s 90 per cent me. I’m slightly over halfway done; I hope to be mixing in the fall and then have it out as soon as possible after that.

LC: Do you have guests on the record?
TK: I’ve been playing most of it, but Jeremy’s played a lot of drums. I also did a few shows in Chicago with John McEntire, he’s on it, and Basia a little bit, too.

LC: Do you have a label?
TK: To be honest I haven’t even started that conversation yet, I’m just trying to get the record done and then I’m gonna focus on that.

LC: Any more shows booked post-Passovah?
TK: I don’t have anything booked right now. My immediate goal is to just to jump right back into recording and get that done, but in the fall and winter I definitely intend to be playing live. It felt good to be singing [at River Fest] — I’m excited to play more shows. ■