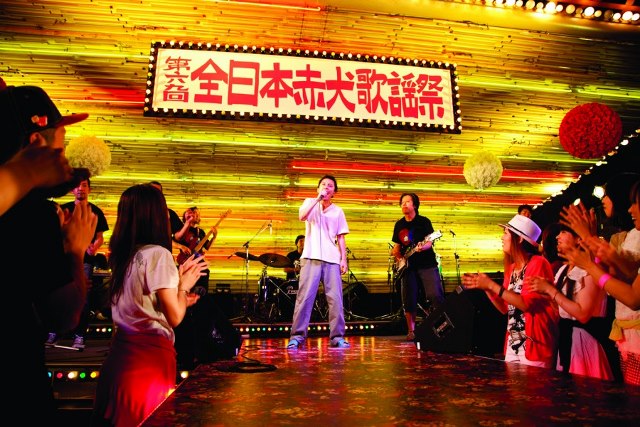 I admire filmmakers who try to mix things up and create new genres or hybrids. It’s often a good way to freshen things up. So a mistaken identity movie blended with comedy, drama and music should be an instant hit, right?

La La La at Rock Bottom introduces us first to an unnamed man (Subaru Shibutani) who’s back in the free world after an 18-month prison sentence. He only gets a few hours of freedom before being beaten by some thugs who leave him to die in a dingy neighbourhood. The nameless hero wakes up with a typical case of amnesia, leaving him to wander in the streets until he comes across a music event. Pushed by some unknown impulsion, he rips the mic from the hands of the signer and begins an impromptu karaoke session, just to pass out moments after.

The manager of the band, a 17-year-old named Kasumi (Fumi Nikaido), decides to bring him home and take care of him. She gives him a job at her recording studio, and renames him “Pooch.” Impressed by his vocal abilities, she offers him a chance as the lead singer of the band. Slowly, Pooch becomes accustomed to his new family, but his happiness might be short-lived as his past catches up to him.

La La La at Rock Bottom begins more like a comedy, but as the story progresses it eventually feels more like a drama. There isn’t anything wrong with any of the genres in themselves, and to be fair, both are well executed on screen. It does, however, feel a bit awkward, as if director Nobuhiro Yamashita had a change of heart while filming. The two leads are excellent, especially Subaru Shibutani, who gives a great performance as the amnesiac who doesn’t quite know what’s happening or where he is. As I said above, the comedic parts are funny and the dramatic acting doesn’t feel forced, just out of place.

The movie has its heart in the right place; maybe it just needed to choose to be one thing instead of taking on multiple genres at the same time. It’s still touching and filled with charming moments, which make it worth a watch. (Emmanuel Delacour) 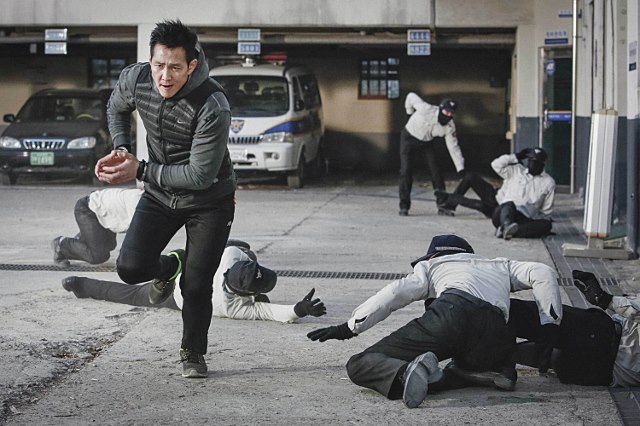 Put some badass cop/martial arts expert/mechanic in a high-stakes situation and see him struggle, bleed and kick ass for the extent of a feature-length film, and you have a good chance of crafting something that’ll attract audiences. Die Hard proved it, Crank confirmed it and Big Match sure as hell reiterates it.

Choi Ik-ho (Lee Jeong-jae) is a hothead ex-soccer player turned MMA fighter who, with the training advice of his brother (Lee Seong-min), is on the path to becoming a Korean no-holds-barred fighting superstar.

Everything seems fine and dandy until Ik-ho’s big bro goes missing and becomes wanted in a murder case. The police, now detaining the athlete as a prime suspect, put him behind bars at the precinct. There, Choi Ik-ho is given an earpiece and is told by a mysterious mastermind named Ace (Shin Ha-kyun) that if he wants to see his brother alive, he must fight his way out of the police station. We soon discover that the MMA fighter will have to put his life on the line for the entertainment of some shadow elite gambling on his success or failure at each stage set up by the diabolical Ace. Will Choi Ik-ho make it? The bets are on!

A simple premise — kick ass or bite the dust — takes us through this fast-paced action adventure where the hero will have to fight police agents, gangsters and members of a mysterious organization. Lee Jeong-jae is perfect in the acrobatic role of Choi Ik-ho, while Shin Ha-Kyun plays an over-the-top puppet master who’s quite enjoyable on-screen as the antagonist. The action is relentless, barely giving us any time to rest, and the editing is superb, shot with a vast array of techniques. The action never looks boring or repetitive.

Big Match doesn’t make the mistake of taking itself too seriously, either. Like Jackie Chan’s classics, it’s filled with goofy moments, overacting (in a good way) and physical comedy. It’s a two-hour ride that goes into hyperspeed with a no-nonsense story. With nothing held back, Big Match provides eye-popping action, laughs and, most importantly, fun. (Emmanuel Delacour) 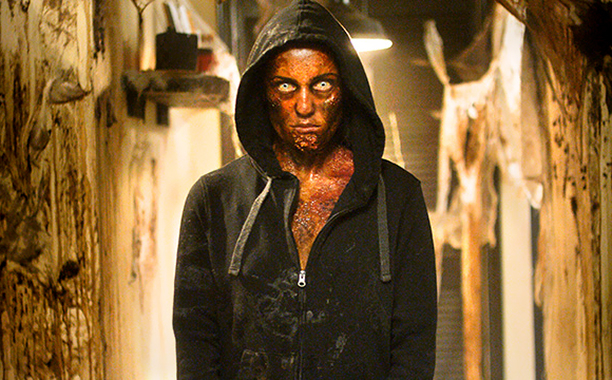 I think it’s too early to call it a worldwide phenomenon, but the “woman-slowly-rots-alone-at-home” subgenre is becoming a Fantasia staple that I’m not too fond of. It’s easy to see the appeal for horror filmmakers: limited locations, the potential for intricate make-up effects, built-in “cerebral” appeal… It’s interesting that it has developed as a subgenre without ever really producing anything remotely classic, but I’m starting to believe that it’s a topic ill-suited to feature length films. Unfortunately, like most films of its ilk, Chad Archibald’s Bite is largely a wasted opportunity, done in by its stilted performances and shallow plotting.

Casey (Elma Begovic) returns from her bachelorette party with a nasty bite on her leg from an unseen underwater assailant. The wound is getting progressively grosser, but Casey has other things on her mind: a dalliance with a stranger during the holiday is making her rethink her relationship with her straight-laced banker fiancé (Jordan Gray), but she can’t find it in herself to speak to him about it. As the wedding approaches, Casey’s wound becomes increasingly infected and her body slowly begins to transform, a cause of growing concern (and eventually death) for her friends and family.

Bite has a kernel of a good idea — too bad it’s exactly the same kernel as Cronenberg’s The Fly, complete with acid-puking action. Where that film worked as a potent (and gooey) metaphor for AIDS, Bite works as a much less potent metaphor for the ripple effects of promiscuity. It’s curiously old-fashioned in the way it treats its characters and their actions. Of course, it doesn’t help that the characters are thinly sketched and given dialogue that sounds like it comes from an afterschool special about the dangers of premarital sex, but even that could be brushed aside if Archibald did something interesting with the transformation. Instead he’s content with rehashing ideas from The Fly and doling out biblical punishments for his characters. (Alex Rose)