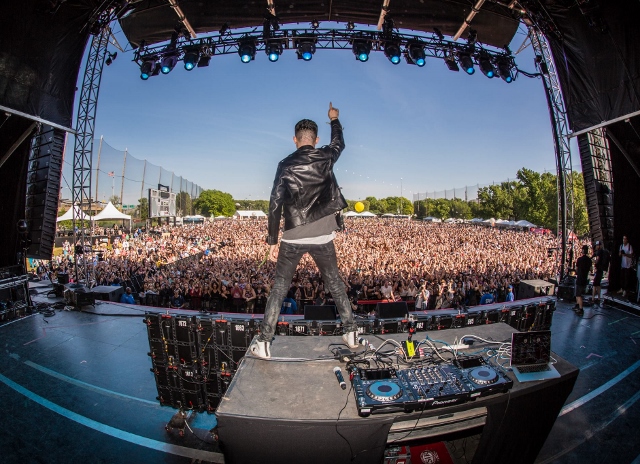 You didn’t really believe Trizzy would forget us, did you?

The chairman of the Fool’s Gold board, and one of Montreal’s favourite sons, brings his empire home for a an open-house, so to speak, closing out Mural fest with a day-long Homecoming block party at the festival’s Main Zone this Sunday, June 14.

Joining him are  FG label co-founder Nick Catchdubs, Rome Fortune and local signees Shash’U and High Klassified, among many more.

“Day Off is a (touring) festival in itself now, and this thing is within Mural, so we kinda had to give it a different name,” says A-Trak, explaining why this particular FG party goes a little off-brand, but is essentially the same idea.

“I think it’s the first of many more,” he continues. “We wanna do more events over there.” His cousin, SaintWoods co-founder and all around bon-vivant Zach Machlovich, helped get this party together.

“I like to think, you know, when I look at the nature of even like the last couple of instances where I found myself in Montreal, I dipped my toe in a few different ponds,” he recalls, describing shows at venues and events that perhaps didn’t allow him to flex true grit, notably a show at New City Gas and a more recent, wildly under-attended appearance with his brother’s band, Chromeo, for beer contest winners.

In other words, not his crowd.

“I went from doing ticketed shows at New City Gas, which was really more of a like a really EDM kinda show, to kind of like just, waiting off for a sec (for better timing).”

“(I wanted) to find a more central and, you know, all-connective kind of venue or opportunity to do now what I really wanna do.

Now that he’s found it, he looks forward to sharing in a more complete form of his vision with his hometown crowd. The beat scene here is vibrant from afar, and A-Trak credits longtime friend and Montreal party-pleasing veteran DJ Simahlak, who also performs Sunday, for turning him on to local talent, mentioning Kaytranada and High Klassified as stand-out examples of Sim’s quietly sophisticated reach of influence. He also cites Chromeo’s P-Thugg as a purveyor of local talent, notably Shash’U.

All in all, it’s a family affair, and the living room this Sunday is well-appointed indeed. We discuss the whirlwind of production talent sweeping the city these last years, but Trak is still an OG MTLien.

“I’ll always have a special place in my heart for the (his former band) Obscure Disorder days, and even before that running around to studios with my brother and stuff, producing records for Sans Pression…I was listening to that stuff the other day and it still really holds up. Those were special times.”

But for A-Trak, the future is now.

“What I’m going to do with my DJing is really to bring together a lot different of scenes.” ■