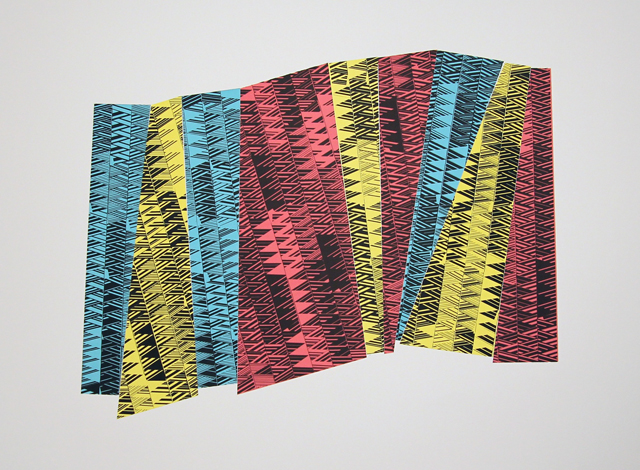 Art lovers of Montreal, hold onto your hats because this may just be the biggest week of the year. Montreal’s signature art fair, Papier, will be on this weekend and has moved to Mile End from its previous outdoor tent set-up at Place des Arts. This year the fair, dedicated to showcasing artworks on paper and featuring over 40 Canadian art galleries including many of your favourites from Montreal, will take place on the upper floors of Complexe de Gaspé, situating itself in the midst of a community of galleries, artist-run centres and studios in the massive former textile factory. The move is allowing the fair to greatly expand its programming to offer screenings, roundtables, tours and more, in addition to the visual art on display. The fair is open all day long Friday through Sunday, with a public vernissage Friday evening. Check out the Papier15 website for full programming details.

Naturally, when a big event like Papier occurs, you can expect several other shows to crop up around the same time. This means a lot of exciting things happening within a handy radius of the fair. I’ll get to these events in a moment, but first let’s have a look at a couple of things going on tonight.

Wednesday’s big show is in Griffintown’s Galerie Antoine Ertaskiran, with painter Kim Dorland opening his show I’ve Seen the Future, Brother, named for a Leonard Cohen lyric. The works, rendered in a variety of mediums from oil to acrylic to spray paint, inject a bit of modern urbanity into the classic Canadian landscape, giving the viewer a strange sense of nostalgia from the future. 1892 Payette, Wednesday, April 22, 5–8 p.m.

Thursday is a huge day, with 10 different openings going on. If you’re free in the afternoon, you won’t want to miss a roundtable at Concordia’s FOFA Gallery in conjunction with the opening exhibition The Rebel Yells: Dress and Political Re-Dress in Contemporary Indigenous Art. The exhibition centres around work by artists who have been influenced by Shelley Niro’s iconic photograph, The Rebel. Thursday’s roundtable will feature a discussion between Shelley Niro, Skawenatti and Dayna Danger on the topic of Intergenerational Photography: Community, Representation and Rebellion. 1515 Ste-Catherine W., Thursday, April 23, roundtable at 3 p.m. followed by vernissage from 5–9 p.m.

Also on Thursday at Westmount’s Han Art, check out a vernissage for For All We Know, featuring new works by neo-expressionist Catherine Everett. 4209 Ste-Catherine W., Thursday, April 23, 6–9 p.m.

A very important event is happening on Friday with the support of 15 different Montreal galleries and artist-run centres including the MAC, DHC/ART, SBC Gallery, Articule, Darling Foundry and many more. Perhaps you’ve heard that Cuban-American performance artist Tania Bruguera had been detained and is now facing charges in Cuba after attempting to re-stage her 2009 performance art piece Tatlin’s Whisper #6 in Havana. The piece would invite citizens and passersby to speak freely into a microphone in a public square for one minute each about their thoughts and ideas about the future of their country. Artists around the world are expressing their condemnation of the Cuban government over the censorship of this work, and the Montreal arts community will be joining the chorus by re-enacting the piece on Friday in the Place des Festivals. The public is invited to participate and show solidarity with Tania and other artists around the world who face similar barriers to their freedom of expression. Jeanne-Mance between Ste-Catherine & de Maisonneuve, Friday, April 24, 12–2 p.m.

Later Friday, head to Articule for the vernissage of Dylan Miner’s Silence of Sovereignty, an exhibition that uses everyday, mundane objects and field recordings from aboriginal communities both on- and off-reserve and a cartography of land-based experiences that ignore colonial artificial borders. 262 Fairmount W., Friday, April 24, artist talk at 5:30 p.m., vernissage at 7 p.m.

Speaking of Mile End, let’s talk about some of the other events surrounding the Papier Fair this weekend. You’ll want to explore the whole building, because several of the galleries housed there will be offering open houses and extended hours. Of special note is that a few stories down from Papier, you’ll find Marge Papier, a group show with 15 artists including Beth Frey, kimura byol and Ian Langohr. 5445 de Gaspé, #602, throughout the weekend.

Just around the corner from the fair, you can take in an outdoor display of a variety of works at Espace 40’s Sans-Papiers – Art in an Irregular Situation, held on the covered terrasse just outside the gallery. Inside the doors, the group show XL3 will open with a vernissage Friday. This show will feature large scale works from 30 Montreal artists including Zoltan Veevaete,Julie Robinson and Nathan Bartley. 160 St-Viateur E., #108, throughout the weekend.

On the Main, Galerie ROCCIA will hold an open house on Saturday with renowned fashion illustrator Jean-Claude Poitras, whose works are currently on display in the gallery. 5692 St-Laurent, Saturday April 25, 11 a.m.–5 p.m.

On Saturday,CanadianArt Magazine is hosting a Gallery-Hop day with a number of special events, including tours and talks at galleries all across town, from shuttles leaving from the Papier Fair site. A closing party takes place at Dazibao. Full program details available here.

As you can see, this is a huge week for the Montreal arts community with tons of work on display, so go early, go often, and enjoy this week’s creative energy!

For All We Know – Catherine Everett

Have Fingers Will Travel – A Tribute to Oliver Jones – Group Show

The Stranger Who Licked Salt Back Into Our Eyes – Brent Meistre

The Beauty in the Banal – Martin Ouellette