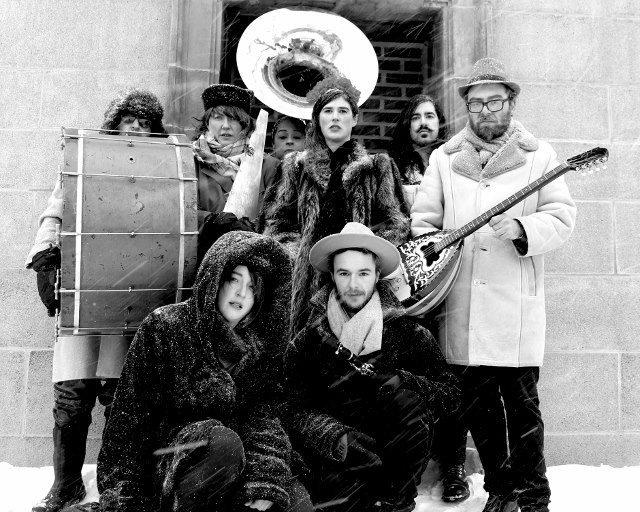 There’s no other band quite like Orkestar Kriminal. They rehearse, play shows and make records (they’re launching their Tummel LP this week) like any other gang of musicians, but all their material, and even the associated artwork, is stolen. The songs come from Greece, Poland, Ukraine, Russia, Cambodia, Mexico and beyond, most of them written during the Great Depression of the 1930s. Until Orkestar Kriminal lifted them from the public domain (a legal form of thievery), these songs were largely unheard, and almost never performed due to their subject matter: they’re all about the criminal underworld, documenting old-time gangstas worldwide.

This project was spearheaded by Giselle Webber, well known on the local scene for having fronted Hot Springs, sharing the spotlight with Roy Vucino in Red Mass, dropping beats and rhymes as Giselle Numba One and rocking the chanteuse vibe as Gigi French.

“I was on a bit of a musical hiatus and I really wanted to jump back on the stage,” Webber explains, “but my sense of pride in myself wasn’t quite strong enough to sing my own tunes. I wanted to sing other people’s songs, and at the same time I was discovering all this old music.”

On a scholarship to Klez Canada, an annual klezmer camp in the Laurentians, Webber attended a workshop on Yiddish criminal underworld songs by Berlin-based musician Daniel Kahn (who recently played a show in Montreal, incidentally).

“I went all gaga,” she says, “and I wanted to get the Gigi French crew together to learn how to play this music, all these dark, seedy, scuzzy songs. But I didn’t want it to be a klezmer band. I was trying to pursue anthropological musical research, sticking to this theme of public domain music from the inter-war period. It wasn’t difficult to find sketchy criminal underworld subjects from the ’30s because everybody was going through a hard time.”

And so Orkestar Kriminal learned how to play Greek Rebetika songs, Mexican narco-corrido songs and Russian underworld songs. The latter were largely played in secluded Romani cafés because, according to Webber, they “could get you murdered for performing them” in Russia, in their time. Luckily the band hasn’t experienced threats or violence when playing this material around Montreal, only the occasional quiet menace from mafia figures — having worked in bars and concert halls for years, Webber says the criminal element is easy to spot and almost impossible to avoid. But their presence, like the attendance of anyone from the various cultures the band is borrowing from at their shows, only adds pressure to play the songs perfectly.

“We’re thieves,” she says, “and you have to be sensitive not to offend while you’re outwardly stealing and profiting from music from other countries by songwriters that are dead. You have to earn back the respect you’ve lost from the get-go by performing the songs so well that you win everybody’s hearts in the end.”

One particularly sensitive and difficult area was covering Khmer songs from Cambodia, where the Khmer culture itself was largely destroyed via genocide in the 1970s.

“When you know that the original songwriter was forced to become Pol Pot’s girlfriend and be a sex slave and ended up dying in a labour camp, it’s like, how can I even perform this song? But I have to because these are beautiful songs, and these are all songs that died off with the [Khmer genocide]. When you decide to bring something like that back into the limelight, you have to do it with the same passion and the same fury that the original songwriters had. You’ve just got to appropriate it in a way that feels authentic to your own personal experience.”

Orkestar Kriminal’s multilingual lyrics have posed a significant challenge to Webber, but not as much as you might think: she already speaks many languages, including Cantonese, and has sought out tutors around town to build on her research and Google Translate exercises at home.

“I started to get a little bit of a reputation in Greek family restaurants as that chick who’s not Greek who sings Greek songs,” she says. “I have to have a link with the cultural community that I’m trying to represent. I need a human connection — it can’t just be anthropological. I happen to live in a town that has tons of people all over the world, so it’s just stupid to sit there in a library or on a computer when you could actually meet some awesome old man in a deli somewhere and have a fabulous conversation about it. The bridge is already built — you just have to be ballsy enough to cross it.” ■