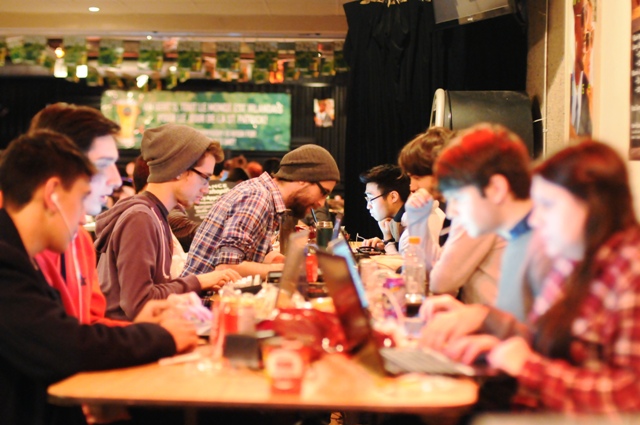 The gaggle of students that had overrun Gerts – McGill’s student-run bar – on Saturday afternoon were staring into their computer screens far more intently than its usual clientele. They also seemed to speak in tongues only a coder would understand.

“You reverted my revert,” a cry rang out from one table. “Now one of my comments is missing because you reverted it — I will revert you!”

Hackathons, a kind of science fair on steroids, bring together teams of up to four students, who spend a full 24 hours seeking to create something with wow factor. Teams demo their product and then democracy takes its course, with participants voting on each other’s projects and picking out the winners. Some of the 700-odd competitors at McHacks 2015, which took place at McGill this past weekend, hailed from universities in Ontario and the U.S. North-East; a few were high-schoolers young enough to have been born during the first tech bubble.

Twenty hours later, with the hacking phase complete, weary-looking groups of students scooped poutine out of Styrofoam containers as they polished the pitches they would use to talk up their creations.

One of the most conspicuous demos in the William Shatner University Centre cafeteria was a regular toaster that had been rigged up with sensors and motors, and connected to the net. By closely monitoring the temperature at the surface of the toast, team Toast4Me’s smart appliance promised perfect toast every time.

“This is the future of breakfast, basically,” said Adam Chan, a University of Toronto engineering student. The device was connected to a laptop displaying a live temperature feed; but it’s when its task is nearly complete that the real magic happens: “I get a text from the toaster saying, ‘Bro, your toast is almost done!’”

Though the team initially intended to use a phone to trigger a motor to push the bread into the toaster, as with all student projects, Murphy’s Law had intervened: “Something happened to the power supply yesterday,” explained team member Nikita Tsytsarkin.

As I found an empty spot at a table to tweet out a photo of this new-fangled Frankentoaster, I realized I was sitting near Michael Gibson from the Thiel Foundation, whose tweets I had seen earlier.

“Some people come to hackathons and sometimes they just want to work on something fun and whimsical that serves no purpose, and that’s cool. And then some people actually create something that could be a product or a service and that’s what I come to look for,” he said. “I’d love to try to help them out.”Gibson was here to hand out a few $1,000 grants to the most promising projects, as well as a pile of booklets containing a chapter of Zero to One by Peter Thiel — the techno-libertarian VC who rode the PayPal elevator to vast riches and who once famously paid 20 students $100,000 each so they could drop out of college and code full-time for two years.

Though Gibson wasn’t keen on my tagging along to observe his M.O., perhaps gaining some insight into the types of questions those who hold the purse-strings might ask at a product demo, I did notice that he often handed out a booklet to those groups at whose demos he lingered. So after checking a few fine efforts by some hackathon first-timers, I started following the trail of Thiel breadcrumbs throughout the first- and second-floor demo spaces of the Shatner building.

One of my first stops was SparkMail, who were touting the concept of ephemeral email: Snapchat for your inbox. You send your email to SparkMail with the recipient’s address in the subject line, and they receive an email whose contents disappear after a set time.

For the next demo, I strapped on a pair of VR goggles made by (Facebook subsidiary) Oculus Rift and found myself erratically driving a yellow Hummer on a racetrack that cut through a psychedelic, shimmering landscape. I was (virtually) drunk! Though my reflexes were way off and my vision was swimming, I managed to make a few correct turns in the course. But when I plowed through what looked like fluffy bushes, I quickly wrecked my Hummer against a tree. MADD should immediately license this PSA-style drunk driving simulation, aptly named Drunkulous Rift.

The trail continued on the first floor of Shatner, where I found the makers of Tendr, or, as they described it, “Tinder for food.” You set parameters for the kind of food you’re looking for and how far you’re willing to go to get it. The app then mines Yelp’s database of restaurant menus to offer up dishes that might interest you, which you swipe in the familiar fashion. A swipe to the right reveals the restaurant’s location and contact information. While certainly whimsical, Tendr looked functional, and it sure seemed like a solution to an unmet need, I think. So it was not surprising to later see them among the six teams voted into the finals of the hackathon.

“Tinder’s not great for us because we’re developers, but on Tendr if you swipe right, you get a match every time!” team member Adrian Pawliszko cracked during their finals demo.

The last stop on the trail of booklets brought me to Furkan Tufekci, a reticent McGill student who said he’d immersed himself in the minutia of Bitcoin for the past two years. His project? Coding scripts for Bitcoin-based smart contracts.

Smart contracts are snippets of code that execute automatically when a pre-programmed condition is met. They aim to become the digital counterpart to legal contracts. Couple these with Bitcoin — a shadowy crypto-currency that can be transferred instantly and untraceably — and my eyes popped as I imagined the future prospects of Bitcoin-based financial derivatives and options trading, since a contract is the heart of every financial product.

Demos done, the hackathon finalists were named and each group delivered a final demo to the entire group. Before the winners were unveiled, there was a brief pep talk by Cool Dad and McGill biz school professor Greg Vit, who referenced Tupac Shakur and explained that the three H’s a start-up needs to succeed are a hacker to build the product, a hustler to sell it and a hipster to come up with a cool design for it.

The democratically selected winners were Tendr, Toast4Me and Parrot, who had demoed a speed-reading app. Gibson, the Thiel rep, meanwhile, handed out two grants: one to the team behind Tendr, the other to the Bitcoin smart contracts guy. ■