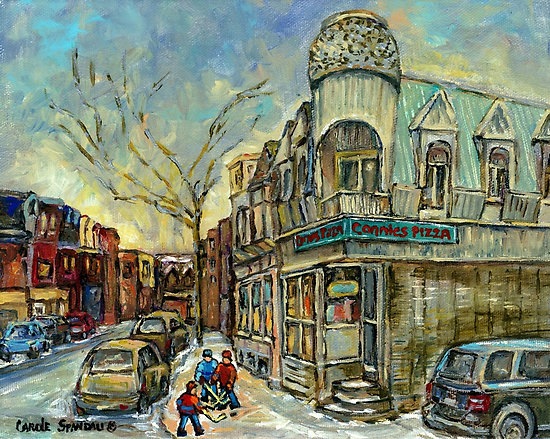 There was a time when the Point was synonymous with balcony beers at 9 a.m. on a Monday. The Southwest neighbourhood, and its historically lower-income, working-class citizenry, has come a long way in the past decade, but it will never become a steady ballin’ milieu. You can fix up the vintage buildings and serve as much foie gras as you, like but you can’t fully gentrify the Point, even if the recent boom of high-end culinary success stories in neighbouring Griffintown entices investors eager to cash in on the buzz.

For one thing, there are just too many legendary grease bars in the ‘hood offering good, affordable, classic comfort food. We ate at a bunch of them.

Just across from the street from the Charlevoix metro, this window-front-style diner does breakfast just the way you want it when you’re too lazy to do it yourself. Once housed in larger and somewhat more regal-looking digs further up the street, A la Fine Pointe feels a little cramped when you walk in, but its bright atmosphere and high ceilings offset the effect nicely. A friendly waitress seated my two dining companions and I, and wasted no time getting us coffee and taking our orders.

I went with a meat-lover’s option: two eggs with bacon, ham and sausage, baked beans, home fries, lots of fresh fruit and a choice of crepe or French toast. I went with the crepe, which was light and tasty. The bacon was absolutely perfectly cooked, and the other sulfates didn’t disappoint. The potatoes were fresh, hot and crispy. The fruit assortment was no after-thought, either. Everything on that double-sized plate was just right.

My friends shared a “bagellette” plate — that’s two fried eggs served over a bagel cut open-faced with a processed cheese slice. They both enjoyed the modest but easy-to-botch combination. Served with bacon, potatoes and more of that fresh fruit, it was a satisfying meal for two people. In terms of price/quality ratio and the general contented air among other diners in the crowded resto, I give this place a standing grade of “solid bet.”

Did you know there’s a steamé joint with a pool table that isn’t smack in the red light district? For 60 years, Paul’s has been plying the Point with patates and roteux. In fact, at this no-frills snack shack, there are only a handful of menu items: steamies, fries, frites sauce and poutine, with a Michigan option for your dog or your ‘tine. No burgers. No clubs. No pogos. Not even a toasté.

My poutine, while not a showstopper, was perfectly acceptable, tipping the scale toward “pretty darn fine.” Paul’s homecut patate is greased gold in its own right, and the Kingsey curd squeaks true, but I’m just not the sauce brune guy. I ain’t mad, though.

If you’re a hot dog head, Chez Paul is worth going off the beaten path for. A plain, old POM bun and Lesters link, coupled with the homemade ‘slaw (made daily from the same recipe since Paul’s opened) turns into plump, perfectly proportioned, wax-paper-wrapped taste of Keb diner heaven. Now, I personally am a “ch’moutard,” meaning I’ll only take cabagge and mustard on my ‘furter. Not to say your condiments of choice will throw the balance off, but I suspect that this particular dog-house wouldn’t have 60 years under its belt by adding some bullshit mayonnaise or whatever.

Since 2012, Boom J’s has been spicing up the Point with tasty Jamaican staples cooked with love in a kitchen that feels like home, and a warm, sparse atmosphere boasting little more than a wall counter and a few stools. You aren’t here for the tablecloths, though.

On this visit, I tried the large jerk chicken platter. Accompanied by red beans and rice and fried plantain, the order consisted of four healthy pieces of perfectly charred, fall-off-the-bone-juicy dark meat seasoned with a spice mix patently not for the faint-of-heart. I’m not pretending to be a connoisseur but this is the best jerk I’ve had in Montreal. The sides, far from phoned-in, were delicious and fresh and gave a nice starchy balance to the zest of the bird. It also comes with slaw-like salad I could do without, but it wasn’t intrusive.

My friend selected a sure hit for the less spice-inclined: Boom J’s boneless chicken roti. The traditional Jamaican take on the filling of curried white and dark meat, potatoes and carrots seems less stew-like than its West Indian counterparts at other spots around town, and I personally appreciate this more mashed take on the dish.

Though we had no patties that day, the beef, chicken and veggie pockets are golden crisp, flavourful and filling, and make a great, cheap meal-snack if you’re lucky enough to live nearby. A full selection of Grace Island Sodas rounds out this soul food experience, which won’t break your bank. Delivery is also available.

The great pizza debate in the rest of the Southwest centres largely around the merits of Woodland in Verdun vs. Nino’s on Monk. Occasionally someone will swear by a lesser-known dark horse. If that someone is from the Point, they’re gonna say Connie’s 100 per cent of the time. I swear by Woodland, but I believe healthy competition is the backbone of a strong local economy, so I decided to check this out in the name of both journalism and equal fattening opportunity rights.

I’ve walked by the place enough times to know it isn’t much to report on the inside, so I decided to check out their delivery steez to see if Connie’s would seize my pizza dollar for keeps. First I thought I’d go with an all-dressed — seldom my pie of choice, but as staple a Montreal dish as one can find. But any self-respecting pie dealership should have one named for the house, and the Connie’s Special happens to be an all-dressed with meat sauce , not far off the mark from my first choice, but so out of character for me that I couldn’t resist.

My medium pizza arrived in 36 minutes, which is pretty spectacular for a Thursday at supper time. I flung open the box and was excited when I saw an old school dough-ball, dead centre. Take that, Woodland.

Then came the real shock. I am a thin crust devotee. Not the über-thin, crispy, trended-briefly-in-1993 thin crust, but just, you know, flat. And Connie’s does it deep dish. I figured I was screwed, that there was no way I was going to enjoy this.

There are probably 100 little spots in this area for all tastes and budgets. Other well-loved dives here include the infamous Capri bar, Paul Patates (not to be confused with Chez Paul) and their homebrewed spruce beer, as well as the Quebec Smoked Meat takeout counter. And they all have their draw. But these four places will open your eyes to the area and its working-class charm. ■