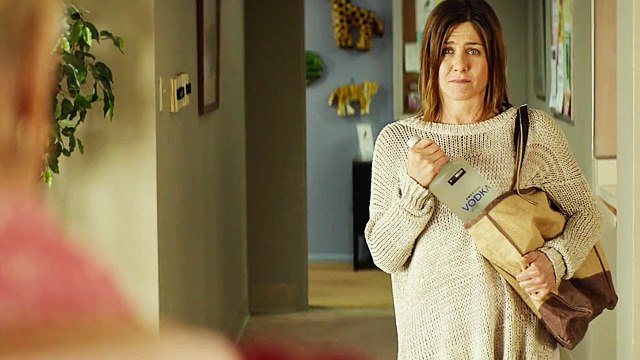 Few actors have had the dubious honour of having done their best work in a bad movie. Jennifer Aniston is a perfectly serviceable comic actress, but she’s hardly ever pushed herself dramatically in any interesting way — even her acclaimed dramatic performances (which mostly limit themselves to The Good Girl, really) have her playing a slightly sadder version of herself. The only way to break such a typecasting is to do a full 180-degree turn, which Aniston acquits herself fairly impressively with in Daniel Barnz’s otherwise pedestrian dramedy Cake. It’s exactly the kind of character that comedians play when they want to be taken seriously: dark without being hopeless, tortured without being evil, scarred without being grotesque. It’s a calculated change-of-pace vehicle every step of the way, in other words.

Claire Bennett (Aniston) was once a successful Los Angeles lawyer. A car crash has left her scarred and in chronic pain, popping pills and drinking wine under the discouraged eye of her nanny/nurse Silvana (Adriana Barraza). Claire sometimes attends a chronic pain support group that she holds very low in her esteem until she begins getting visions of a fellow group member who has recently committed suicide (Anna Kendrick). Plagued with these visions, she not-so-subtly immerses herself into the life of her grieving husband (Sam Worthington) and their son. Behind Claire’s cynical, acerbic exterior hides a pain and a grief that she has been repressing since the accident, and her newfound relationship with a hallucination might be the key to it all.

The series of contrivances and clumsily withheld details that set Cake into motion recall an innumerable amount of tragicomic Sundance also-rans, ground together into a makeshift indie sausage that never quite convinces (it’s tonally most similar to something like Six Feet Under, which has to be the most influential yet underappreciated force in indie cinema of the aughts). It avoids treacly sentimentalism from the get-go by portraying Claire not as a saintly victim but as an unpleasant, nasty and unsympathetic character, but then uses all of its screenwriting tricks and fakeouts to infuse the movie with the tears and histrionics you’d expect from a film with that kind of synopsis. (The relationship with the spectral Anna Kendrick character is by far the most underwritten aspect of the movie; it all but vanishes once its contrivance-settling purposes are through.)  It’s the kind of movie that mistakes story progression for narrative twists, withholding information for dramatic effect when revealing it early on would likely make the characters richer and more interesting.

Claire isn’t a particularly original character; she’s the kind of cynical, boozy, curmudgeonly character that would perhaps be played by Bill Murray or Kevin Spacey in another film, the person so broken down by life that they’d rather watch the rest of it slip away in a drunken stupor. It’s an unusual role for Aniston to play, however, and it’s surprising how well she acquits herself with the foul-mouthed, quick-to-insult Claire’s dialogue. Her performance comes across as fully formed and lived-in in the way that the film doesn’t with its hollow emotion and contrived machinations ultimately taking away from Aniston’s characterization.

It’s difficult not to be cynical about the intentions behind Cake. It’s being touted as Aniston’s big dramatic breakthrough and that’s precisely what it feels like. It feels like a calculated attempt to make a showy vehicle that botches and half-asses everything but the star’s big emotional breakthroughs. It’s like it was written in order to give the Oscar editors as much footage for the sizzle reel as possible. Aniston’s performance would make one hell of a sizzle reel — too bad it’s in such an underwhelming movie. ■