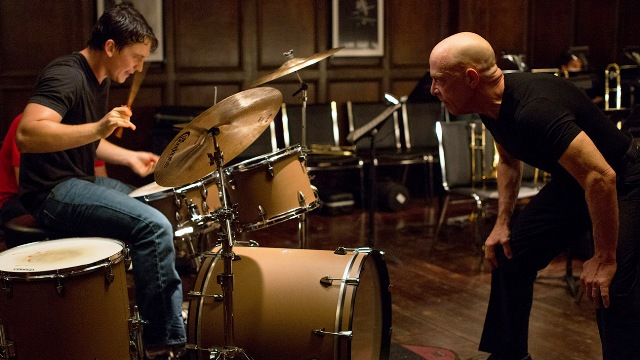 There are tons of movies about music. The act of playing music and (especially) the psychological state of being a musician are inherently cinematic, and tons of musicians have had drama-fraught lives that make them perfect for biopics. Yet, of all the great music movies that have been made to this point, very few have dealt squarely with the physicality of playing music. Tortured genius, musicality and the emotional toll of creating for a living are all compelling, but they also come with the oft-overlooked reality that there’s a gruelling physical element to any musical prowess. Damien Chazelle’s second film, Whiplash, tackles this head-on by focusing much of its runtime on the blistering intensity of jazz drumming. Whiplash drips with sweat and blood ricocheting off cymbals, the intensity of every reverberation pulsating through the film. It’s a film that’s so rhythmic and propulsive that it drum-solos you right past the conventions of its narrative into a near-trance state.

Andrew Neyman (Miles Teller) is a mild-mannered music student who secretly harbours the dream of becoming the next Buddy Rich. Hypnotized by the big-band basher’s work, he is accepted into a prestigious Manhattan music school and soon noticed by Terence Fletcher (JK Simmons), a tyrannical, perpetually apoplectic conductor who rules his jazz band with an iron fist directly to the balls. Fletcher doesn’t exactly take Andrew under his wing — he berates him constantly, threatens him with physical violence and forces him to bash out complex rhythms to the point of exhaustion. Fletcher’s approach isn’t even tough love; he’s a raging asshole, constantly insulting students and flinging homophobic, racist language at them to push them to the limit. Andrew is determined not to let Fletcher get to him, even if it means pushing himself way out of his comfort zone.

Whiplash is essentially a fever-pitched two-hander, with Simmons reaching heretofore-unmatched levels of intensity (maybe his portrayal of neo-Nazi Schillinger on Oz tops it), spouting R. Lee Ermey-isms and flinging cymbals at flubbing musicians. I can think of few current actors who are as skilled as Simmons at hurling profanity, and watching him sink his teeth into the role is one of the more satisfying things you’ll experience in a movie theatre this year. Teller is a more than able foil, a mild-mannered ‘regular guy’ who explodes with rage and venom behind the drum set. The two are so good at playing off each other that you kind of start hoping this’ll turn into a globe-trotting franchise where Simmons and Teller square off in a variety of disciplines, chucking a variety of tools and instruments at each other.

That’s also where the biggest problem with Whiplash lies. At its core, it’s pretty much the oldest story in the world, a typical sports-movie setiup given the sheen of respectability and pulse-pounding intensity of jazz. When Whiplash isn’t whipping itself up into a frenzy, its scenes have a much more familiar energy and the character interactions suddenly feel tired. It’s the rare movie that would work better without any space for a breather, though its last half-hour is so intense you may well forget to breathe.

Whiplash is doubly impressive considering it’s only Damien Chazelle’s second film (it’s adapted from a short that Chazelle made with Simmons in the same role). It has the singularity of purpose and focus that one rarely finds in a filmmaker this green. It’s also kind of a miracle — a movie that patches over its flaws with such vital intensity that pointing out it that it has flaws seems unfair somehow. If intensity was the sole measure of a film’s worth, Whiplash would be a masterpiece. ■