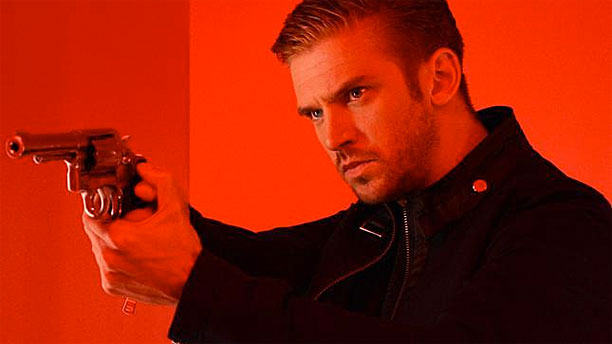 Dan Stevens in The Guest

If you think of the generic ’80s film aesthetic, chances are you’re coming up with the day-glo, neon-soaked look popularized by Michael Mann. Even though it fell out of favour for a long time, it (and the other signifiers that come with it, like the yacht-rock harmonies of Hall & Oates) has been making a comeback in the last few years with films like Drive repurposing it . Yet there’s more to the the feel of an ’80s genre film than white pants and bright pink lettering, and director Adam Wingard and writer Simon Barrett have that down pat with their new action-thriller The Guest. It’s not set in the ’80s and it borrows very little of these aforementioned aesthetics, but the imprint of ’80s genre masters like James Cameron and John Carpenter is all over this thing.

Dan Stevens stars as David, a decorated soldier who pops up on the doorstep of the Peterson family’s home one morning. David is a good friend of the Petersons’ deceased son and, now that he’s been given his discharge, he’s decided to see if he can lend a hand to the family he’s heard so much about. The parents (Sheila Kelly and Leland Orser) are more than happy to show hospitality to this newfound surrogate son, while their dorky son Luke (Brendan Meyer) is happy to have someone stand up to bullies, but their early-twenties daughter (Maika Monroe) is somewhat more suspect of this chiseled, well-mannered and affectless stranger that has suddenly entered their lives. Chances are, she has a very good reason.

Like last week’s Gone Girl, The Guest works best if you know as little as humanly possible about its premise. It’s nearly impossible to discuss if not to mention that when something seems like it’s a little bit off, you’re probably right to doubt it. What ensues is a film that pulsates with the go-for-broke, relentless sense of fun and peril that characterizes the best films of the period. Bad things can and will happen, but Wingard and Barrett (who previously collaborated on the memorable meta-slasher You’re Next) never lean too hard on the parodic or self-reflexive angle of their story. This is the kind of movie where horrible things can happen around kids without being a kids movie (though nothing happens to the kids) and where the stuff that doesn’t happen in movies usually happens quickly and brutally.

Propulsed by a Carpenter-inspired synth score and an appropriately steely lead performance from Downtown Abbey’s Stevens, The Guest is the rare kind of throwback that transcends its status as a reverent, nostalgic look back. It’s not so much a “They don’t make ’em like this anymore” — it’s more of a “Let’s show them we can still make them like they used to.” ■

The Guest opens in theatres on Oct. 17