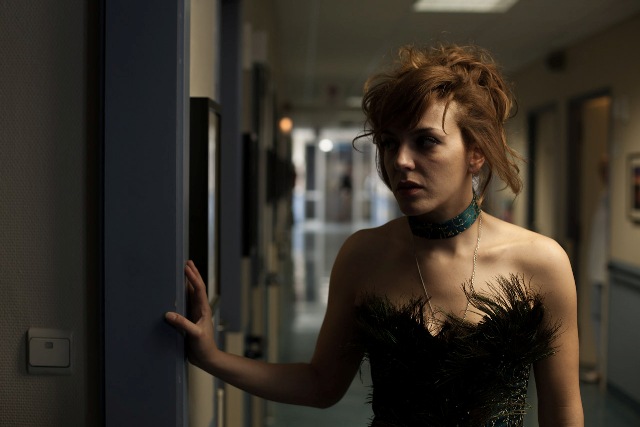 The thing about movies is that they live in a hermetic world — if the filmmaker decides to show a character as a bunch of quirks and tragedies, those characters are then bound to the filmmaker’s vision. We’re all a bunch of quirks and tragedies — depending on which moments of my regular life you use, I could be the protagonist in a Wes Anderson movie or a Lars von Trier one. David Lambert’s Je suis à toi is a film about three misfits, bruised and battered by life, that could be just about anyone you meet. They’re not outwardly weird or movie-level quirky, but what happens to them has to fit in a narrative. The remarkable part of Lambert’s film is how alive he makes them feel; the more iffy part is the way he gets there.

Lucas (Nahuel Pérez Biscayart) is a young Argentinian man who makes his living jerking off on webcam. On a whim, he accepts the generous offer of a fan to come and live with him all expenses paid. Lucas soon finds himself in the company of Henry (Dardennes regular Jean-Michel Balthazar), a middle-aged, overweight baker living in a small town in Belgium. Henry has ‘obtained’ Lucas as a sort of pet, putting him to work in his bakery and cuddling at his own whim. When Lucas tries to have a life of his own, however, Henry becomes territorial and aggressive, particularly when Lucas strikes up a tentative friendship with the bakery’s only other employee (Monia Chokri, the only outwardly local element of this Belgium/Quebec co-production).

Lambert is incredibly adept at building characters through small moments and sparse dialogue scenes; the actors inhabit their characters completely and create a compelling world for them to live in. All three are that rare breed of prickly but fundamentally likeable that’s fairly hard to pull off adequately. As the film progresses, however, Lambert keeps on piling on the left-field character developments so that what originally felt like a sharp character sketch soon begins to resemble three condensed seasons of a soap opera. It’s still ultimately a moving and compelling film, but too much supposed depth is just as bad as not enough. (Alex Rose)

Local documentarian Simon Gaudreau shot his latest film over the course of two years in an East-End Montreal rooming house. The inhabitants — all men, mostly older, and all close to the very bottom of the economic scale — have their lives portrayed in the rawest form: this is cinéma vérité taken to the extreme.

Anyone who’s had any exposure to disenfranchised people will be familiar with the men’s stories, with tales of shattered dreams and unlikely future plans mixed with philosophizing and incoherent rambling. There’s a little wisdom and a lot of humanity there, but more than anything there’s an overwhelming sadness. Depending on your politics or your mood, you could wonder either why there’s no one to help them or why they can’t help themselves, but they all seem to be facing their struggles in a brutal solitude.

Gaudreau’s artistic style is as raw as his subject, as though he either doesn’t know the standard rules of filmmaking or is deliberately breaking them. His camera doesn’t flinch from anything: one man shoots up, another writhes on the floor in pain (while refusing Gaudreau’s offers to help); at one point, the camera points straight into a toilet that’s been blocked for a month. Gaudreau doesn’t put himself above his subjects either, at some points smoking up with them and at another letting one man trade places with him behind the camera.

The men on-screen, especially the de facto star Claude Rufiange, are charismatic and portrayed in a poignant way. But you have to be prepared for what you’re getting into. I found it extremely harsh and hard to watch, and I have some experience working with the same population the film portrays — for someone going in cold, it could be a bit traumatizing. (Malcolm Fraser)