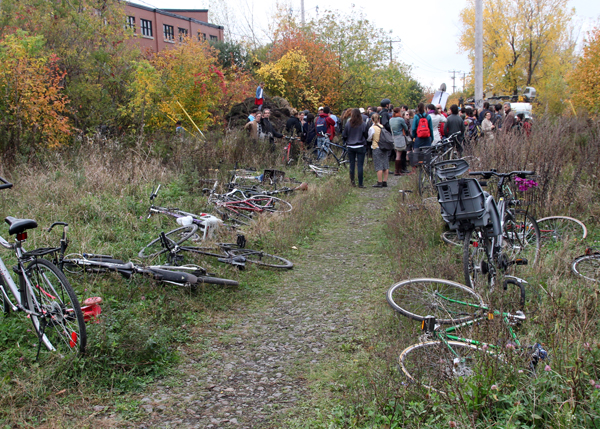 The Champ des Possibles today. Photos by Lisa Sproull (scroll down for more)

Mile End residents may have a million new lunch spots and bars selling $7 pints, but it’s rather lacking in green space, a fact that makes it that much more important to preserve the few patches not yet paved. The Champ des Possibles is one such space, used as a park by local residents for years despite uncertain legal footing. Formerly owned by CP Rail, the field full of uncultivated vegetation and wildlife was purchased by the city in 2006, and in 2013 Plateau mayor Luc Ferrandez declared one of the two lots to be rezoned as a protected green space.

It was the second, as-yet unprotected lot that CP Rail bulldozed without warning (and without ownership of the land) this week, leaving many Mile End residents shocked and saddened. A rally was held Friday afternoon, organized by the group les Amis du Champ des Possibles, to denounce the actions of CP Rail.

I got the lowdown on the situation from Marke Ambarde, President of les Amis du Champ des Possibles.

Lisa Sproull: So what is happening here today?
Marke Ambarde: CP Rail sold this land to the city in 2006 and it seems like they forgot. They came in here to do the work without asking. They didn’t ask the borough, they didn’t ask les Amis, they didn’t ask the city. It seems they thought it belonged to them, but now they’ve admitted they made a mistake. They’ve basically excavated all the plants and vegetation that was here and put down some construction materials and have been doing work. So we’re asking them to leave.

(The southern lot) has been protected as a municipal park. This part is still in limbo, we still don’t know what’s going to happen here. They could put condos in here, so we’ve been saying for years that this part has to be included. The whole thing is a part of the field. We think it should become all one zone that’s managed in a cohesive way for the community.

LS: What needs to happen to fully protect this part of the land?
MA: There has to be a change in zonage. Otherwise, it’ll be open either for industrial or commercial activities, or more likely, condos. So, we want to make sure that this won’t just become another building, or a stockyard for the borough or something like that. We would like this zoned “Espace Vert,” so it stays a natural space.

After the rally, the CBC reported that CP Rail spokesperson Salem Woodrow has acknowledged the company erred in excavating the park and would be removing the equipment and paying for the restoration of vegetation on the land. ■