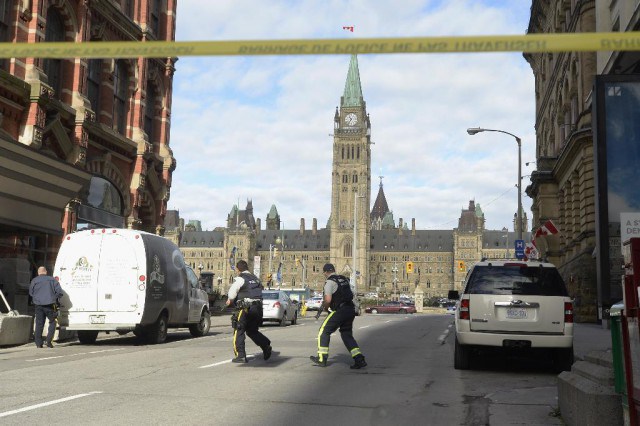 There’s nothing like a tragedy to bring out a flood of meaningless clichés. Canada is not “stronger” or “more united” than it was last week, when two senseless murders were committed by two deeply disturbed individuals. Our “innocence” was not lost — though many people’s naivete was deeply challenged — and although we say we will “never forget” the two victims, Warrant Officer Patrice Vincent and Cpl. Nathan Cirillo, the truth is that, a year from now, most of us will find it much easier to remember the names of the men who killed them.

A more accurate cliché about last week’s events is “we’re lucky it wasn’t much worse.” In St. Jean-sur-Richelieu, Martin Couture-Rouleau chose a strange weapon and a strange venue, running down Vincent in a suburban parking lot after apparently waiting more than two hours for someone in uniform to walk past. Another soldier was hit but not seriously wounded and no one was injured in the high-speed police chase that ensued — except for Couture-Rouleau, who was shot to death after crashing his vehicle into a ditch.

In Ottawa two days later, we were even luckier that the body count was limited to just one victim and the shooter. Michael Zehaf-Bibeau began his assault by shooting twice at Cirillo, and missing partner Brandon Stevenson. He then ignored passers-by as he made his way to the Parliament building’s Centre Block, including the driver of a limo that he commandeered inside the security cordon. He then made his way inside the building, walking past closed doors behind which the Conservative and NDP caucuses were meeting. In the ensuing exchange of gunfire with security forces, the only casualty was Zehaf-Bibeau himself, taken down by the Commons’ sergeant-at-arms, Kevin Vickers.

If  Zehaf-Bibeau had been able to enter either caucus room rather than merely shooting at their closed doors, we might well be mourning dozens of MPs in addition to a lone ceremonial guardsman.

This is the type of threat that we should have been prepared for, yet it’s something that the federal government has all but ignored despite a similar attack in the Quebec National Assembly in 1984 that resulted in three deaths and sweeping security changes.

We were lucky it wasn’t worse and we are lucky that Zehaf-Bibeau’s attack brought to our attention some very serious flaws in security around the Parliament buildings. In the following days we learned that there are no fewer than three separate security forces involved in protecting our seat of government and that they literally aren’t on the same wavelength, since their radios are on different frequencies.

Today there are armed officers on the outside doors Zehaf-Bibeau ran through so casually last Wednesday and a thorough re-examination of Commons security will lead to further changes that some are already lamenting might make it appear that our wonderful democracy is under siege.

It is, of course already under siege, through various pieces of legislation aimed at, among others, restricting voting rights, using Revenue Canada to harass birdwatching groups and boosting the powers of our domestic spy agency, CSIS.

“These acts were carried out with no advance warning and, thus far, seemingly little to no preparation.”

If the cost of protecting our democratic institutions is more fences, bollards, armed guards and metal detectors, that’s a price we should all be prepared to pay.

But if the price is to surrender even more of our privacy and our civil liberties under the guise of fighting terror, to use another cliché, “the terrorists will have won.” ■