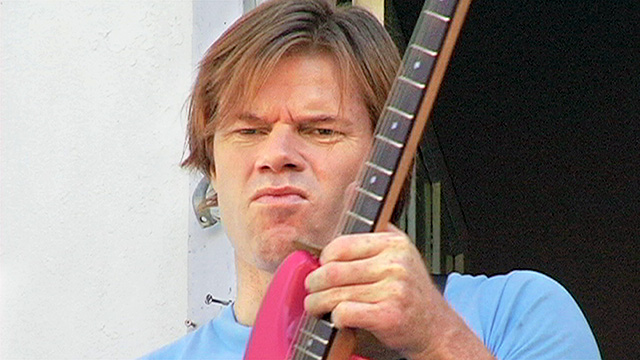 I Am a Knife With Legs

I Am a Knife With Legs

Born out of an aesthetic that combines washed-out low-budget music videos from the ’80s, hand-drawn animation and something you could charitably call “Dad doesn’t know how to work the camcorder,” I Am a Knife With Legs feels like something from the weirdest parts of the early Internet, when viral comedy was made by misfit nerds who disappeared back into the ether rather than up-and-coming improv comedy troupes, and stumbling upon something this weird felt alternately exhilarating and baffling.

Bené (Bennett Jones, the writer/director AND lead actor) is a rock superstar who has had a fatwa put on him by a mysterious Internet user named ilovetennis27. Bene hides out with his friend Beefy in a Los Angeles apartment, waiting for imminent death and periodically bashing out lo-fi jams in the R Stevie Moore vein. While this kind of deadpan, bad-on-purpose humour is hardly original these days, Bennett finds an absurdist cadence that soon establishes the film as being the product of his very particularly personal brand of dumb, anarchic nonsense.

It’s certainly not to everyone’s taste, but the almost off-puttingly dadaist aesthetic of I Am a Knife With Legs is what makes it brilliant. With an un-Googleable cast and crew and vaguely intemporal setting, it truly feels like an unidentified filmic object, a piece of deeply weird and memorable cultural detritus that’s bound to stick with you whether you enjoy it or not. (Alex Rose)

Goal of the Dead

What happens when you mix the veneration hooligans have for soccer (or le foot if you’re a fellow Frenchie) with the murderous rage of a zombie? You’d certainly come very close to the quirky and hilarious Goal of the Dead.

This two-part (or mi-temps) revisiting of the living dead mythos takes place in the small village of Capelongue, where soccer is pretty much the only exciting thing that ever happens. All hell breaks loose during a friendly match between the local amateur team and the very prestigious and professional team of l’Olympique de Paris when zombies invade the stadium, turning the quiet town into a post-apocalyptic nightmare. Samuel Lorit (Alban Lenoir) is the captain of the pros who returns to his birthplace 17 years after creating a lot of pent-up scorn for leaving his little league to play with the big guys, only to find himself battling zombies instead.

During this establishing first half, we get glimpses of the beginning of the zombie infection caused, in a tongue-in-cheek manner, by a dose of what is believed (wrongly) to be steroids. This humorous take on the world of sports sets a tone that is reprised in the second half, in which the survivors fend for their lives. Surprisingly, for a two-part movie in which each part is handled by a different director, there isn’t much of a difference in the tone. Thierry Poiraud and Benjamin Rocher are capable of drawing laughs from the homogenous blend of sports-related humour, some chuckles from the intense gore and even a few smiles from the sometimes very French puns.

Goal of the Dead does not break any new frontier in the zombie film genre, but despite its long running time, this movie is a clever look at la planète foot and more than deserves a watch. (ED) 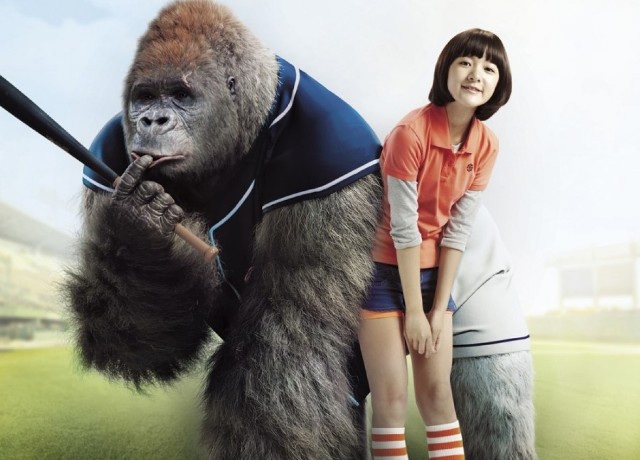 Do you miss that glorious period in ’90s cinema when animals were doing unlikely, kooky things like talking or shooting hoops or being a pig who thinks he’s a sheep dog and likes to sing? Well, meet Mr. Go, a giant baseball-playing gorilla!

Directed by Korean filmmaker Kim Yong-hwa, this Chinese/South-Korean co-production tells the improbable tale of Weiwei (Jiao Xu), a young Chinese girl who grows up with a gorilla named Ling Ling in a circus. When Weiwei’s granddad (the circus’s owner) dies in an earthquake, she must find a way to pay his debt to keep the circus and its orphan inhabitants safe from a greasy loan shark and his goons. All this information is weirdly explained in a very long intro that’s stylized and narrated like an infomercial, as if Yong-hwa wanted to fast-forward to the bit where there’s a gorilla playing baseball in 3D, but remembered that he had to piece together some semblance of a story for that to happen. Anyway, somewhere amidst that jumble of information, we find out that Ling Ling (eventually renamed Mr. Go) learned how to hit with a bat. When a sleazy Korean baseball scout comes a-knocking, well, you can imagine what happens. (They start dating.)

The concept of a baseball-playing gorilla is amusing for about 15 minutes, but this film is freakin’ two hours long. There are so many unnecessary plot elements added, like a SECOND baseball-playing gorilla (!) and some kind of drama with Japanese scouts that I couldn’t really keep track of. I don’t know who would enjoy two hours of this. Maybe nerdy cool kids who read subtitles? Oh right, a Fantasia crowd. Enjoy, you lovely weirdos! (Roxane Hudon)

Demon of the Lute

Chances are that if you ask someone to picture a cheap kung-fu movie from the ’70s, they’ll picture a Shaw Brothers production: pasted-on mustaches, visible wires, eye-popping colours, shoddy dubbing and non-stop kung-fu action. The Shaw Brothers were so productive that they defined an era and a genre, but nothing could quite prepare you for the hyperactive insanity of their obscure ’80s effort, Demon of the Lute. Ostensibly aimed at a younger market than their usual output, Demon of the Lute is an over-caffeinated live-action kung-fu cartoon, full of preposterous characters and a snaky, outrageously wobbly plot on which it hangs its action scenes.

Pint-sized thief Ding Dong (who’s originally identified as a girl, but then is referred to as a little boy throughout the rest of the film) and his father (known only as the Thief) witness the death of many of their fellow townspeople at the hands of an errant lute that produces such dissonant, Merzbow-like sounds that it immediately kills people in its immediate vicinity. They soon learn that Feng Ling has been tasked by her master to stop the murderous lute by finding the magic bow and arrow that are the only thing capable of destroying the lute. Feng Ling, Ding Dong and the Thief team up with a cave-dwelling young man with a giant birthmark on his face to find the lute, fighting eight million bizarre bad guys on the way, including a mushroom/monkey-man hybrid who takes a leak on the Thief’s head, a guy who can grow a pink ‘fro at will and rides around on a Rottweiler-powered chariot and another dude whose arm extends 20 feet to punch people.

Needless to say, Demon of the Lute has the dramatic propulsion and narrative construction of a small child relaying the plot of a video game they might never have played. It’s complete fucking nonsense from top to bottom, an earnestly nonsensical and exhausting trip into the mind of a theoretical child in a sugar cereal daze. Kung-fu and wuxia purists will probably find it all a bit much, but as someone who finds the “better” wuxia films to be a little staid and dull, it’s kind of a blast. (Alex Rose)