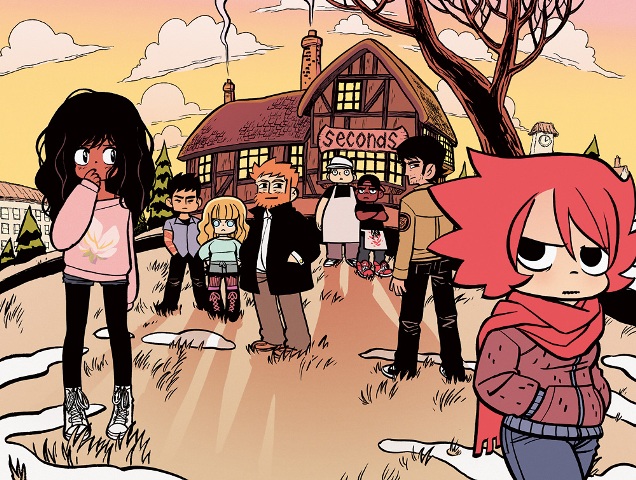 One could easily get the sense that this premise might be an all-too-real fantasy for the creator of the international comics sensation Scott Pilgrim. How do you follow up a series of books that made you a rich man and revered Canadian comics artist with a movie starring Michael Cera? By opting for an irony-laden autobiographic nod to the idea of follow-up novels in the first place.

In Seconds, that follow-up novel appears in the form of a new restaurant, and our author in the form of a feisty, red-haired chef with a perfectionist complex named Katie. Katie is our heroine and it is she who discovers the cryptic 4-step instructions to receiving second chances.

Katie is the opposite of adorable, slacker Scott Pilgrim. A driven, talented, but controlling chef approaching 30, Katie in the transition stage of opening her new dream restaurant while hanging around (and living above) her old one, called Seconds — now one of the most popular restaurants in town. Things are not running smoothly. She’s broken up with her boyfriend and the new restaurant construction is slow, the location revealing itself as nothing more than a wrong-side-of-the-tracks money pit.

Though Katie’s conundrum is set in the present day, it becomes fairly clear from the opening lines of “Once upon a time” that Katie, whose inner monologue acts as narrator, is the central character in an old school folktale — or maybe it’s a fairy tale, depending on how much you require your fairy tales to actually contain fairies. Enter Lis, the book’s fairy, and the restaurant’s resident “house spirit.” Lis is O’Malley’s fairy with a modern, hipster spin — a sullen, mysterious, fur-coat-and-no-pants wearing sprite who might just be the book’s most interesting character.

As house spirits are wont to do, and in a gesture of benevolence towards her distraught houseguest, Lis leaves Katie a magic mushroom with instructions on how to revise an action she regrets. Katie takes the mushroom and gets a do-over. Later Katie finds more mushrooms, and in a rush to achieve perfection, despite Lis’s warnings, continues to ingest the mushrooms, “fixing” mistakes further and further back in time until she no longer recognizes her own life. The consequences are drastic. There is a battle between house spirits. Like a true fairy tale, in the Anderson or Grimm Brothers mold, the moral of the story is easy to pick out: life is perfect just the way it is — don’t try to mess with it.

While Seconds definitely fits the folklore bit, almost inspiring the kind of magic we’ve come to recognize in manga, it’s also a sort of belated coming-of-age psycho-therapy story. In trying to fix all her imperfections, and eventually coming to terms with them, Katie “finds herself” and her self-confidence, so to speak. But unlike the classic female bildungsromans we’ve come to know and love (Jane Eyre, Girls, etc.), O’Malley doesn’t bestow Katie with any psychological depth or development. There is one interesting moment when it looks like she might have to choose between her new restaurant and her hot, slacker ex-boyfriend, but as in fairy tales (and, disappointingly often, female coming of age stories), she gets the restaurant and the guy, resulting in the sigh-of-relief, happy ending that makes for good cinema.

But if Katie’s happy ending is promptly and cleanly contained within the pages of  Seconds, it kind of feels like O’Malley’s own happy ending is further off. If Seconds is O’Malley’s second chance at authoring a touching, almost universally admired graphic novel, the question is: did he blow it? Not really. Seconds isn’t terrible. It’s just not comparable. Ultimately, O’Malley’s ironic, autobiographic nod falls flat. What could be charming feels lazy. What could be an exploration of the crossover between awesome ’90s girl-power narratives and ancient old wives tales only amounts to Disneyfied makeout sessions. If I didn’t know better, I would say O’Malley just wanted to get his follow-up novel out of the way so he could move on to better things. ■