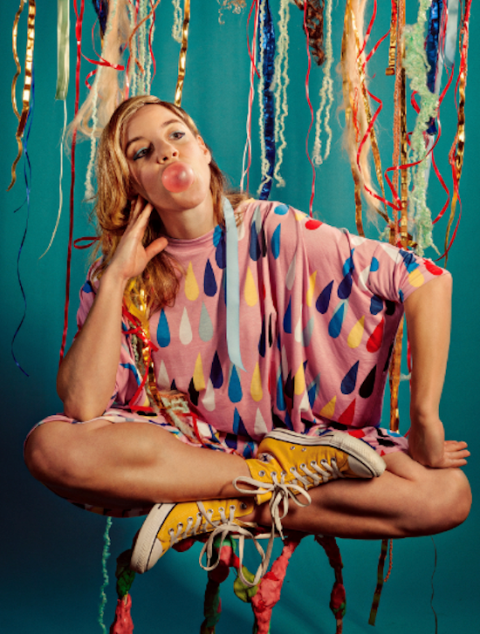 tUnE-yArDs was born in Montreal. Back in 2009, Merrill Garbus released a record called BiRd-BrAiNs, a bombastic flurry of untamed vocals, shredded ukulele, field recordings and crude percussion. Through its rawness and imperfection, the promise of something spectacular could be heard, and seen in her breathtaking live shows, where her explosive Afro-folk sound was fleshed out with loads of guests from the local scene. Garbus was in another band at the time, Sister Suvi (with Pat Jordache’s Pat Grégoire), but it was tUnE-yArDs that got her signed to 4AD, and soon she left the city to return to her native USA.

She moved to Oakland for love (of her band’s bassist Nate Brenner), but career soon followed. She ditched the Internet-marketing day job she did remotely from Montreal, and in 2011 released w h o k i l l, the record that would put tUnE-yArDs over the top, extend her tours and land her on TV — notably, she was accompanied by the Roots in a great performance of “Gangsta” on the Jimmy Fallon show.

The new tUnE-yArDs record, Nikki Nack, followed a period of instability that’s typical of artists who’ve just had their first taste of success. After the high of the spotlight and the adrenaline of touring in 2011 and 2012 came the comedown of creative drought and physical fatigue. Garbus turned to a book about how to function as a professional musician (specifically Songwriters on Songwriting) and began treating the job as a job, 9 to 5.

“I had to grow into the fact that I am a songwriter, that this is actually my job,” Garbus says. “I thought, ‘Really, is this gonna work out? Can I turn a bedroom, lo-fi DIY project into a real job, into something I make my living from?’ And this time, I feel that that’s the case, I feel a certain amount of confidence and justification for us being allowed to do this just as much as any other band.

“All around me, I see musicians getting in trouble waiting for the miracle of inspiration to just suddenly shine down on them, and I think that’s kinda how I was expecting it to go down. You know, it’s like, ‘Oh, it’s just gonna come.’ And that’s not what happened. It doesn’t happen without you putting in time. That, to me, was terrifying, but also helpful, just to hear that this isn’t some kind of miraculous, magical thing that happens, it really is a bunch of hard work. And, you know, no one really wants to talk about that [laughs]. People want to speculate about how a band got so big, but a lot of it is just sustaining the work, and the energy around the work.”

Far from feeling like a grind, Nikki Nack is tricked out with fun, as reflected in her Pee-Wee’s Playhouse-inspired “Water Fountain” video and her new theatrical stage set-up. And the record bears the influence of another book: How to Write a Hit Song. Tunes like “Time of Dark” suggest an effort to break through the indie/cult glass ceiling, but it doesn’t stoop to pandering to the masses, and never undercuts Garbus’s weird energy and experimental edge. One addition to the otherwise insular tUnE-yArDs M.O. was production assistance from Malay and John Hill, whose credits include some of the biggest names in U.S. hip hop and R&B.

“Truthfully, it was encouraged by our record label—it’s, like, part of the PR machine (laughs), so they can say, ‘She worked with people who worked with Rihanna and Frank Ocean,’” Garbus says. “I don’t mean to be cynical about it because the truth is that, although I had my doubts about the whole experience, there was absolutely a part of me that wanted to know about making more mainstream music, a part of me that wanted to learn how to make motherfucking pop hits.”

As for the bones of songs, and what makes certain pieces of music timeless, Garbus concedes that it’s not all about grind and technique. “For me, one of those songs is ‘Just My Imagination’ by The Temptations. That’s one of those eternal songs that are just, like, I don’t know, there’s a magic there that comes from something else, not just the musical formula. That Motown sound was very honed and very calculated in some ways, but if there’s no heart in the song, people can really feel that. Those songs that kind of cut you like a knife, those are harder to come by, and that’s what I’m after — that’s what I think dedicating yourself to any art form is, seeking those moments, not just thinking about the commercial value of the song, but seeking the shit that is superhuman.”

tUnE-yArDs will be in Montreal this week, and while Garbus & co. have always excelled live, the latest incarnation of the band and the show sounds more amazing than ever.

“There are five of us now,” Garbus explains. “We don’t have our saxophones anymore, we have a drummer and two singers, and we have a bit more production [laughs] — we’ve been having a lot of fun with this kid’s show, Pee-wee’s Playhouse kinda thing.

“For this album, I really wanted to create a fun vibe, and just remember that music-making is fun, instead of taking myself seriously. It’s been really nice to reconnect with that.” ■