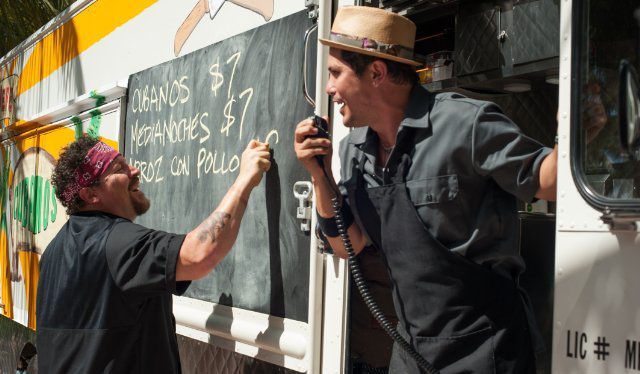 The inciting incident that gets the plot of Chef going is one of my most feared clichés to deal with as a film critic: chef Carl Casper (writer/director Jon Favreau) takes an unctuous food critic (Oliver Platt) to task for daring to give him a bad review while the critic himself has no cooking skill. It’s not a new sentiment in art, but it’s one that I nonetheless find terrifying: what if it’s in a really shitty movie? What if I have to take down a movie that has implicitly cast me as its villain, thereby confirming my villainous tendencies? It’s a curious sentiment to find in a film as broadly eager to please and light as Chef, but even without the villainous critic, it’s an obvious feelgood crowd-pleaser that seems almost venom-proof.

Carl Casper is a former wunderkind with a good job at a slightly antiquated Los Angeles restaurant owned by old-school hardass Riva (Dustin Hoffman). When powerful food critic Ramsey Michel announces he’ll review the restaurant, Riva forces Casper to stick to the basics and cook the “safe,” regular menu. The unadventurous meal is soundly panned by Michel, leading to a Twitter flamewar between chef and critic that climaxes with a video of Casper freaking out going viral. Left without a job after the outburst, Casper reluctantly accepts his ex-wife’s (Sofia Vergara) offer to accompany her and their son Percy (Emjay Anthony) to Miami, where her millionaire other-ex-husband (Robert Downey Jr.) gifts Casper with a shitty old food truck. With the help of his buddy Martin (John Leguizamo) and his precocious son, Casper reinvents himself as El Jefe, mobile king of cubano sandwiches.

Movies like Chef are becoming harder and harder to come by at the multiplex these days; mid-budgeted, star-studded dramedies that are nonetheless designed to appeal to everyone while leaving in the F-bombs and weed smoking that will inevitably earn it an R rating. Being broadly appealing and commercial without licensing deals and continuing universes shouldn’t feel like taking risks, but Chef is nevertheless refreshing in its desire to just tell a story. In that sense it owes a lot to movies like Kramer Vs Kramer (evident in the father-son cooking scenes and probably nodded to with the casting of Hoffman) that are more interested in the scruffy details of everyday life than universe building, combined with a pornographic desire to showcase food and cooking that’s half Big Night, half Bourdain.

Favreau has surrounded himself with a likeable cast in no great hurry to exert themselves (particularly Scarlett Johansson as a waitress and sometime paramour of Casper’s; she practically sleeps through her scenes) and made a film that’s as dedicated to hitting the third act resolution as it is to painstakingly explaining how to construct the perfect cubana. It’s often cheesy and not likely to age particularly well due to the way it depicts social networking and particularly Twitter as a miraculous epiphany — there’s a sequence where the truck’s success is depicted as a bunch of retweets that turn into the Twitter bird and fly away, and I can’t think of any situation where that won’t be the Hammer Pants of 2024. But it’s very hard not to find the whole thing endearing, not to mention mouth-watering. ■

Alex Rose explores the worst of cinema on his podcast and blog, Why Does it Exist? @whydoesitblog on Twitter