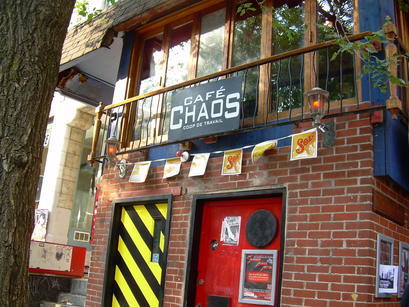 Chaos KO’d: Once an important springboard for local artists and a haven for punk acts and the political, co-op and venue Café Chaos shut its doors for good on Thursday. There was to be a final show on Saturday, but according to the Facebook event page, there won’t be a send-off after all. The nearly two-decade old St-Denis fixture survived a move, but it couldn’t outrun the gradual douche-ification of the street.

More fingers, more fun: Season pass holders to La Ronde have an exclusive ride all to themselves this summer. The ride involves a biometric scanner that gives you access to the premises. Okay, so it’s not as thrilling as a roller coaster, but your fingerprints could find themselves on one hell of a trip. The park says your prints are safe, but some people are understandably creeped out about Big Coaster keeping tabs.

Coppa son sistema: There’s a hot new sound coming later this year to Montreal, but it won’t be from a band. The SPVM, known to tear-gas and rubber-bullet the unruly, are planning to add sound cannons that can hit up to 143 decibels to their excessive arsenal. If the police break up a raucous afterparty with sound cannons, is it considered irony?

Safer roads: The Plateau borough announced plans earlier this week to make the roads safer for cyclists, pedestrians and drivers in the next two years. Some highlights: 20 km of new bike paths, reduced speed limits on residential streets and more pedestrian-friendly intersections. Chances are you’re walking/driving/biking a little more carefully these days, so any changes to get people to keep that mindset is a good idea.

Jump around: For those who ever dreamed of joining Cirque du Soleil or being a traceur, but were too uncoordinated for either, Exalto Park at Parc Olympique will be able to satisfy such acrobatic desires in a safe environment. It’ll have a zipline, obstacles, a nine-metre high structure and harnesses, thankfully. It opens Saturday. ■